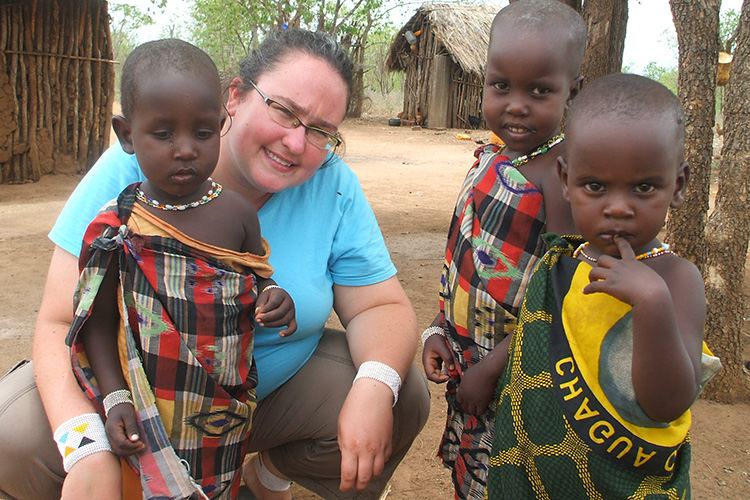 “I fell in love with the country and the people” during an undergrad trip to Tanzania, said UWM grad student Allison Kotowicz. “My mom has a very vivid memory of my calling home and telling her ‘I feel like I’m home. I feel like I belong here.’”

Allison Kotowicz’s journey to discover the world took a detour when she was an undergraduate at Beloit College.

She was looking to study overseas, but somewhere where English was spoken. At a study abroad fair, she started talking to a counselor who told her about an anthropology program in Tanzania, which interested her.

“I’d always wanted to go to Africa, but thought I’d never be able to do it,” Kotowicz said. “I fell in love with the country and the people.  My mom has a very vivid memory of my calling home and telling her ‘I feel like I’m home. I feel like I belong here.’”

She will be heading to Tanzania in August 2019 as a Fulbright-Hays doctoral dissertation research abroad fellow, the only graduate student from UWM to receive this prestigious award in recent years. Her fieldwork is on conservation, tourism and development, with a specific focus on the Maasai people of Tanzania and how they are preserving their identity in the 21st century.

Kotowicz came to UWM for graduate school because of the strong anthropology program, and decided to make Tanzania her total focus.

She is thankful she’s come so far in her academic career as a first-generation student from a family that offered plenty of non-economic support but was not able to help her financially. As an undergraduate, she was part of the McNair program. Then at UWM, she took part in the graduate school’s AOP Fellowship Program, designed to assist underrepresented and low-income students.  She is now an advisor for UWM’s McNair program.

“The McNair program, both at Beloit and UWM and the AOP program has helped me in so many ways throughout this journey by fostering a love of research and by giving me the tools that I need,” she said. “For scholars who are just starting their graduate school journey, I can speak to that because I’ve been going through it. To be able to give back to that program is a great opportunity.”

She is also looking forward to giving back to the people of Tanzania who welcomed her during her first trip and the nine visits that have followed. For three summers, she led other students in service trips.

“They’re been kind enough to host me in their homes for several months at a time. The first time when I did my master’s thesis, I spent eight months living with a family, who at the time knew very little about me. Now I consider them a part of my extended family. They’ve given me so much. How can I repay them in return?”

She will be working with Dr. Huruma Sigalla at the University of Dar es Salaam and research collaborator Jacob Galahenga at Mzumbe University.

“Every time I go to Tanzania my connections grow. It’s very much like a second home to me.”

Her eventual goal is to have a career in academia, but also to be able to spend time in Tanzania.

“I want my work to have an impact, not just writing and publishing, but to give back to the communities. My ultimate goal is to set up a community center for the Maasai to allow visitors to come and learn about the culture. I want to merge academia and applied research to make a difference.”