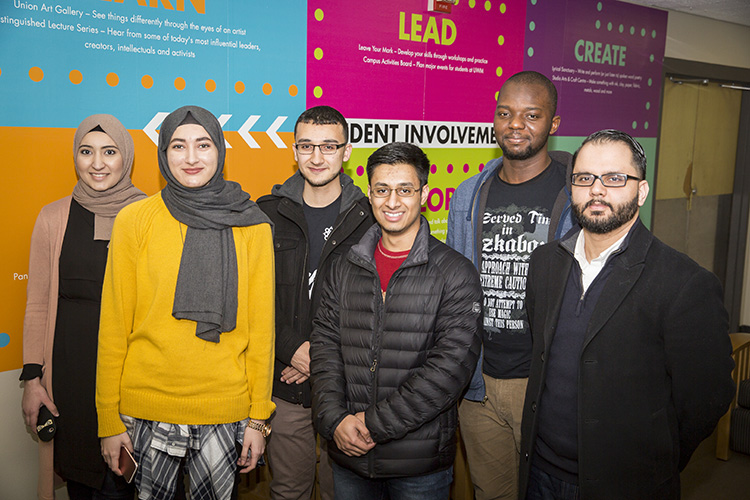 In the spring of 2016, when Omar Saleh and Firas Hamid of UWM’s Muslim Student Association started discussing a speaker they’d really like to bring to Milwaukee, Kareem Abdul-Jabbar was on their dream team.

“He is a very prominent Muslim American and has a connection to the city,” said Saleh, a senior in civil engineering and current president of the association.

At that point, however, the noted activist and former basketball star seemed far beyond their reach and budget. “People said you’ll never be able to get him,” Saleh recalled.

“I was very critical at first,” said Hamid, former president of the association and now an adviser, when Saleh first brought up the idea. “It’s not that I didn’t want him to come, but I thought, ‘Is this realistic?’” Like Saleh, Hamid is a senior, double majoring in marketing and supply chain and operations management.

But together the leaders of the association persisted and succeeded.

Abdul-Jabbar is set to speak Thursday, March 2, at 7 p.m. at the Milwaukee Theatre, 500 W. Kilbourn Ave., thanks to the work of the Muslim Student Association and support from many others on campus and in the community.

The event is focused on UWM students but is being held downtown because it is expected to attract a large audience from the broader community.

“He will draw interest from people of different backgrounds,” Hamid said. “He is so highly respected on many levels – racial, educational, political, religious.”

And, of course, there is his basketball career, which started at the professional level here in Milwaukee. (The Milwaukee Theatre is next door to the UW-Milwaukee Panther Arena, which was known as the Milwaukee Arena when it was home to Abdul-Jabbar and the Bucks.)

Abdul-Jabbar, who spent six seasons with the Milwaukee Bucks, including their only NBA championship year, before moving to the Los Angeles Lakers for 14 more years, is the National Basketball Association’s all-time leading scorer and a six-time NBA champion. The Bucks retired his number, 33, as did the Lakers.

However, he has moved beyond sports in the decades since his retirement from basketball in 1989.

“In the research I’ve done on him, I’ve come to learn that he has a very long resume for his sports career, but he likes to focus on the intellectual aspects of his life,” Saleh said. “Here’s a quote from his website: ‘I can do more than stuff a ball through a hoop. My greatest asset is my mind.’”

His many accomplishments outside of sports include being a regular contributing columnist for Time magazine and Washington Post, an activist, lecturer and New York Times bestselling author. Abdul-Jabbar’s latest book, “Writings on the Wall: Searching for a New Equality Beyond Black and White,” was released last summer, and has been nominated for an NAACP Image Award. Secretary of State Hillary Clinton appointed him U.S. cultural ambassador in 2012, and in November 2016, President Barack Obama awarded him the nation’s highest civilian honor, the Presidential Medal of Freedom. Abdul-Jabbar’s Skyhook Foundation supports education, particularly in the STEM fields in underserved communities.

The Muslim Student Association thought that Abdul-Jabbar was an ideal person to bring to Milwaukee as an example of what a respected man who is both an African American and Muslim can accomplish, Saleh said. His appearance also is a chance to reach out to the public to dispel misinformation about Muslims and their faith, he added.

“We want people to learn what our faith is, what we believe and the teachings of Islam. He is able to represent that as someone who is famous and has accomplished so much with his faith as well.”

The challenge for the student organization – composed of about 100 members – was coming up with the tens of thousands of dollars it would take to bring Abdul-Jabbar to Milwaukee. The association, founded in 1998, advocates for UWM Muslim students, provides programs to keep them connected to their faith, and works to teach the campus community about the Islamic creed and Muslim culture.

“I’m impressed to see the work that has gone into this…how far we’ve come in bringing him here,” Hamid said.

The Muslim Student Association’s leadership reached out to find partners to help support the event, working with groups on and off campus.

Co-sponsors and supporters include several groups at UWM – Student Involvement, Sociocultural Programming, Division of Student Affairs, Division of Global Inclusion and Engagement, Campus Activities Board, Athletics, University Recreation and the College of Letters and Sciences’ Cultures & Communities Program – as well as the Islamic Society of Milwaukee, the Milwaukee Muslim Women’s Coalition and the Baye Foundation.

In Milwaukee, Abdul-Jabbar will spend about 45 minutes talking about his own journey, and another 45 minutes answering questions.

“We want him to discuss his life and experiences and the obstacles he’s faced through his life and some of the values that helped him overcome those obstacles,” said Saleh.

Abdul-Jabbar will have copies of his books for sale after the speech and will be available to sign them. He will not sign memorabilia.

The event is free for UWM students; $10 in advance for UWM faculty, staff and alumni; and $15 for the general public. At the door, tickets for faculty/staff and the public will be $5 more.

Tickets will be available starting Feb. 15 at the Union Information Center or by calling 414-229-4825. Students and faculty/staff need to show a UWM I.D. Students may receive only one free ticket.