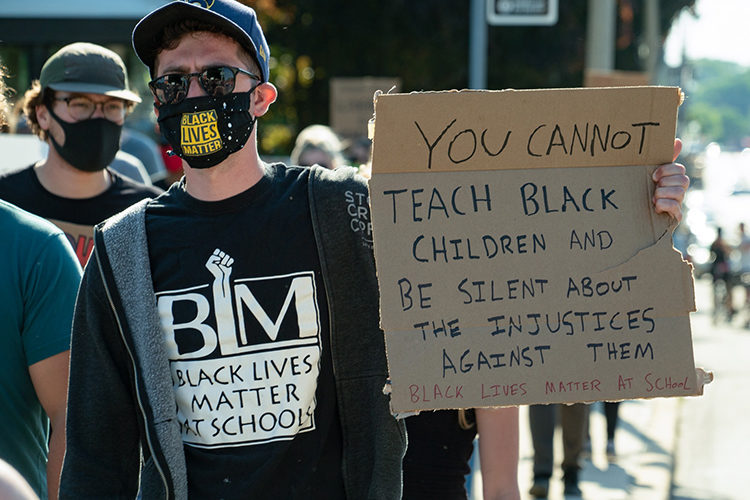 Noah Wolfe, a senior in education who is in an accelerated master’s degree program, is already thinking about how he can help and support his future students in urban schools.

That’s one reason why he’s become involved as an ally in Black Lives Matter protests.

For him, the tipping point came when he was involved in a protest in Shorewood this summer.

“A white man came up screaming, saying he supported the protest, but why were we interrupting his daily life,” Wolfe said. “A 14-year-old Black girl went up to him and started defending not only herself, but the protest. I’d never been involved in a protest before, but after seeing that happen right next to me, hearing those Black voices, I wanted to be more involved with everything that was going on. It was kind of a wakeup call.”

In early June, he posted an event to Facebook reaching out to his suburban friends and neighbors. He expected the event, “North Shore Justice for George Floyd Peaceful Protest,” which he co-organized with Black activists from Shorewood High, to get a couple hundred people. More than 1,500 people showed up in Shorewood’s Atwater Park to listen to speakers, and then marched around the North Shore. Estimates were that about 5,000 people were involved overall. Wolfe is quick to say that he’s been working closely with Black students from his alma mater, Shorewood High School, and his role is to help amplify the message, not be the voice of the movement.

Wolfe, who plans on going into exceptional education and will be working with diverse students, had been doing some reading about social justice and schools in the black community on his own, but said he was especially  inspired by Amy Gutowski, who taught his Intro to Teaching course.

“In class he was always very present, paying attention and asking interesting questions, and he never shied away from discussing difficult topics (was always up for some courageous conversation),” said Gutowski. “He cares about his work and his students (especially for populations who have been marginalized and oppressed). I could tell he was a fellow change-agent. I’m very proud of him.”

Wolfe’s involvement in social justice has carried over into his work life as well. He has been working at Stone Creek Coffee while in school. Eric Resch, managing director and founder of Stone Creek Coffee,  tapped him this summer to help lead a new company initiative, Brewing Change, that supports employee efforts involving social justice, environmental change, racial equity and improving the community. “That’s a job that’s in social justice and is going to help make some change,” said Wolfe.

“Brewing Change is a manifestation of Stone Creek’s mission, which is social responsibility,” said Jessica Sheridan, director of coffee for the company (and also a UWM alum). “Thanks to the efforts of Noah and others via Brewing Change, Stone Creek is able to use our business as a force for good and support its local community of Milwaukee and beyond.”

The Stone Creek job ended at the end of summer, but during the school year Wolfe will be balancing academics, research and teaching.

For the past three years, he’s been working with as a student researcher with Chris Lawson, associate professor in educational psychology, researching inductive reasoning in school-age children – how they use specific facts to arrive at general conclusions. During his senior year, Wolfe is hoping to focus on students with special needs and compare their results with those found in earlier research. Wolfe was one of seven undergraduate researchers honored in the 2020 Senior Excellence in Research Awards.

Wolfe  is also the first student in a new accelerated master’s degree program in special education that combines undergraduate and graduate studies and includes teacher certification. Through that program, he’ll be eligible to teach under a special license for much-needed exceptional education teachers.