Water is concrete’s ultimate enemy. Although concrete withstands constant beatings from cars and trucks, water can break it down, pooling on its surface and infiltrating the tiniest cracks. Add freezing and thawing cycles, and it’s no wonder roads need frequent repairs.

To keep Mother Nature out, researcher Konstantin Sobolev has created a water-repelling concrete. When he pours water over it, the liquid beads up on contact, forming almost perfect spheres that rush off the hard surface.

Besides this water-resistant variety, the UWM professor of civil engineering has made other high-performance concrete composites. Unlike ordinary concrete, Sobolev’s composites are designed to flex, making them ultimately stronger, and some even combat air pollution.

Most importantly, his materials are designed to last. Some of his creations have such a high level of “crack control” that their service life is pegged at 120 years.

That’s a massive improvement over the average life span of Wisconsin roads, which falls in the 40- or 50-year range. The difference matters for reinforced bridge decks, too, considering 10 percent of them must be replaced after 30 years. 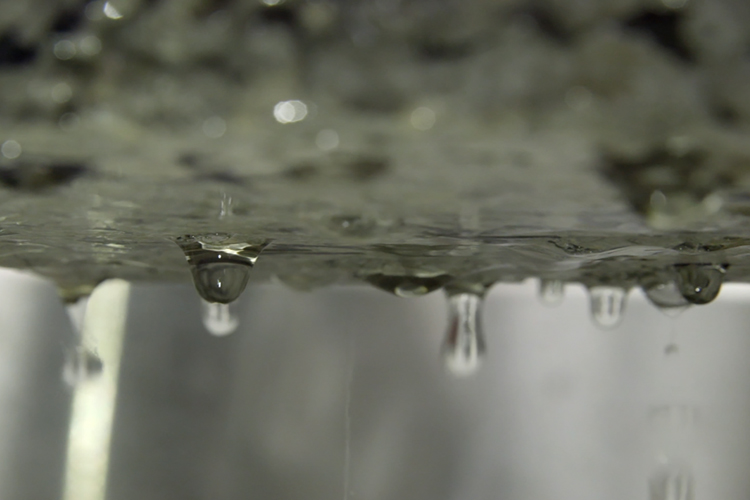 Sobolev’s main weapon against water is called “superhydrophobic engineered cementitious composite,” which may sound complex but has the simple goal of fighting moisture in two ways.

Sobolev makes this composite and others in his lab at the College of Engineering and Applied Science. A nano-additive changes the concrete on a molecular level when the pavement hardens, resulting in a spiky surface at the microscopic level. This causes water to bead up and roll off, much as droplets do on tiny hairs covering the leaves of some plants.

In another water-control method, millions of tiny bubbles containing air and siloxane oil are blended throughout the material. When cracking occurs, the bubbles break open, releasing the oil and keeping water from saturating the concrete.

Neither method completely waterproofs the concrete. But Sobolev combines them with a fiber reinforcement strategy that eliminates the source of large cracks and addresses the brittleness inherent in high-strength concrete.

Super-strong polyvinyl alcohol fibers or high-density polyethylene fibers, each the width of a human hair, are mixed into the concrete and bond with it. When cracks begin, the fibers prevent them from opening and becoming larger gaps.

In fact, Sobolev isn’t trying to eliminate cracking. He wants to direct the process in a preferred way, resulting in evenly distributed microcracking. This disperses the load so that tiny cracks remain small while the material’s superhydrophobic features form a water barrier.

This architecture, Sobolev says, allows the material to withstand four times the compression of traditional concrete and have 200 times the ductility, or flexibility under stress.

“These are complicated materials, and making them is not as simple as adding something to the concrete mixture,” says Sobolev, the son of a concrete engineering professor. “The addition of fibers offers only a little improvement.

“What we had to do was chemically change the material’s behavior so that extended deformation actually improves strength.”

Sobolev’s water-resistant composites have generated lots of attention since a 2014 story appeared in the online technology magazine Gizmodo. But he’s also developing a pervious concrete that allows water to pass right through it and soak into the ground below. It’s an ice-prevention strategy that also has great potential for use in green infrastructure.

Urban areas are increasingly interested in green solutions for stormwater management while they replace their aging infrastructure. This presents a business opportunity, says Nicholas Passint, a product and business development engineer in Spancrete’s equipment division. The company, based in Waukesha, Wisconsin, supplies precast concrete for buildings and highways.

Spancrete has been independently researching and developing products that improve the durability of pervious pavement. A more durable pervious concrete is needed to control runoff from parking lots and sidewalks, which contributes to flooding and carries pollutants into lakes and rivers.

Now Sobolev has proposed to enhance Spancrete’s pervious concrete with an idea that will make it more green. “Parking lots are a perfect use for pervious concrete,” he says. “So, what if that concrete composite could also help control air pollution caused by vehicles?”

He is creating a titanium dioxide-based catalyst that’s added to the concrete mix. When sunshine hits the hardened pavement, it activates the catalyst, which then breaks down organic contaminants from the vehicle exhaust near the concrete.

The material is still in the testing and commercialization stage, Passint says, but it’s packed with potential. “It could be used with traditional concrete applications to act in the same manner,” he says.

It’s exactly the kind of versatility Sobolev is going for.

“When I think of new concrete,” he says, “my focus is on unique properties and high performance, but I also like to see synergy.”