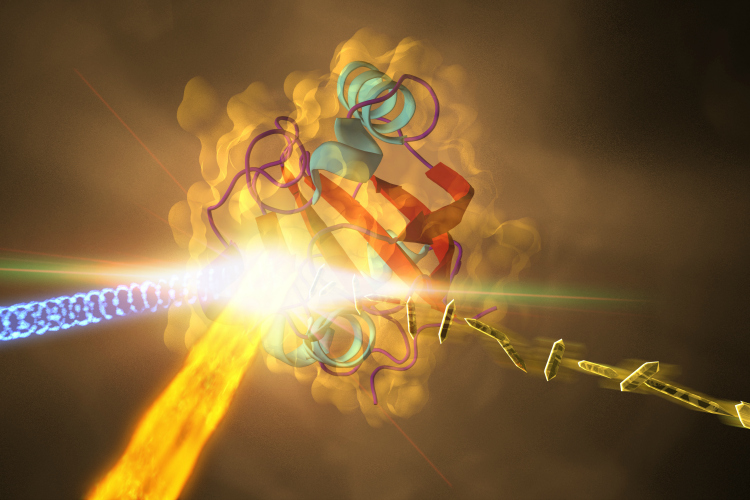 An illustration of the experiment, in which the structure of a crystallized protein (center) changes as it reacts to light (coming from left). The X-ray laser beam (bottom) hits the crystal, diffracting photons, which allowed scientists to re-create a 3-D snapshot of the protein. (SLAC National Accelerator Laboratory illustration)

Every process that sustains life is carried out by proteins.

But understanding how these complex molecules do their jobs depends on learning the arrangement of their atoms – and how the structure changes – as they interact. No effective method for observing molecular movement with such detail and speed had been available, until now.

In a groundbreaking experiment with the world’s fastest camera, a team of physicists – led by the University of Wisconsin-Milwaukee ­– documented the fundamental processes of a chemical reaction unfolding in real time. They captured images of a tiny crystalized protein as it reacted to light in increments that occur in a few quadrillionths of a second.

“This puts us dramatically closer to understanding the chemistry necessary for all life,” said Marius Schmidt, a UWM physics professor who led the experiment. “Discovering the step-by-step process of how proteins function is necessary not only to inform treatment of disease, but also to shed light on the grand questions of biology.”

The experiment is the subject of a paper published online May 5 in Science magazine.

Unveiling the atomic changes in protein molecules as they accomplish tasks is important because structure determines their function. UWM has been at the forefront of an international effort of 11 institutions to unmask those structural dynamics.

“Light drives much of biology, and this novel experiment is a pinnacle in understanding how living systems respond to light,” said team member Keith Moffat, a University of Chicago professor who pioneered this experimental approach and, with his Chicago colleagues, developed it over 25 years.

A movie of molecules

A protein is far smaller than a single cell. For example, about 3,000 different proteins operate in the common bacterium E. coli.

Using the Linac Coherent Light Source – the XFEL at SLAC – the scientists mapped a protein’s atoms in motion as the chemical bonds of a central dye molecule, which was buried within the protein and made it yellow, rearranged.

For the first time, the structure of the yellow dye within the protein was captured in an electronically excited state.

This excited-state dynamic is fundamental to light perception in all living organisms, including bacteria and plants. Crucial parts of photosynthesis are driven by similar excitations.

“Once the protein absorbs a photon of light, it changes its shape from an initial configuration, known as the ‘trans’ form, to a new shape, known as ‘cis,’” said team member Petra Fromme, director of the Biodesign Center for Applied Structural Discovery at Arizona State University. “The transition occurs in such an unbelievably brief time span that nobody had been able to see the important details of this process – until our discovery.”

At the speed of life

For the past 60 years, the only way to examine proteins in three dimensions was with X-ray crystallography. It involves shooting X-rays at crystallized proteins, which diffract the X-rays and create patterns of dots the way shaking a paintbrush sprays drops on a wall.

The pattern provides a fingerprint for that protein. The millions of data points can be mathematically reconstructed to form a 3-D image of the protein’s molecular structure at a single point in time – a still snapshot.

To capture protein molecules in action, however, scientists need both an optical laser and an X-ray laser with split-second pulses. With about 25 trillion pictures per second, the Linac Coherent Light Source offered an ultra-slow-motion video of extremely rapid events.

Next, the researchers will work on getting femtosecond details over a bigger slice of time to get more action into the “movie.” This could ultimately allow scientists to intervene in the process of protein function by using light.

“We’re interested in the mechanism of the chemical reaction, with the goal of controlling and steering it in a certain direction with light,” Schmidt said. “We can shape laser pulses for that purpose. We will discover how the molecules march in synchrony during such processes.” 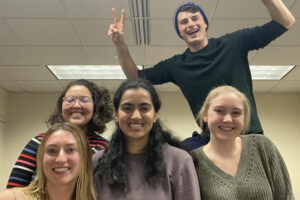