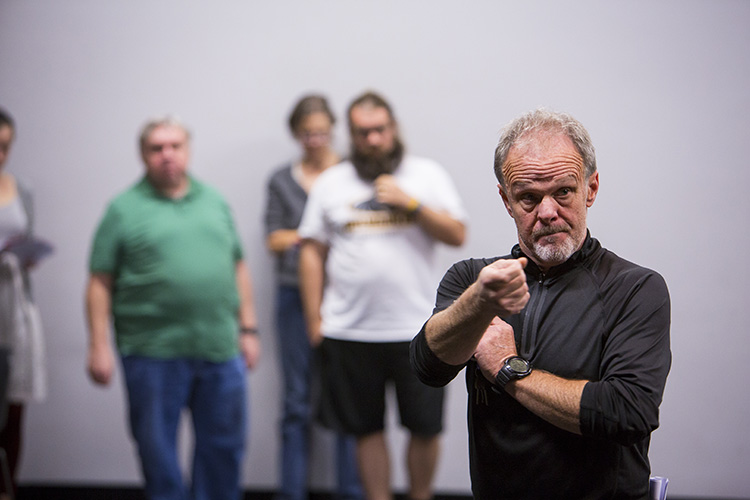 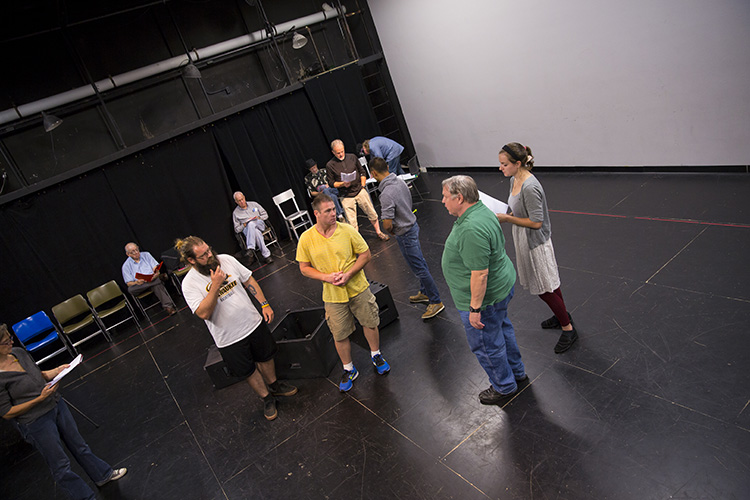 A group of veterans prepares to do a run-through of a scene from "Julius Caesar." (UWM Photo/Derek Rickert) 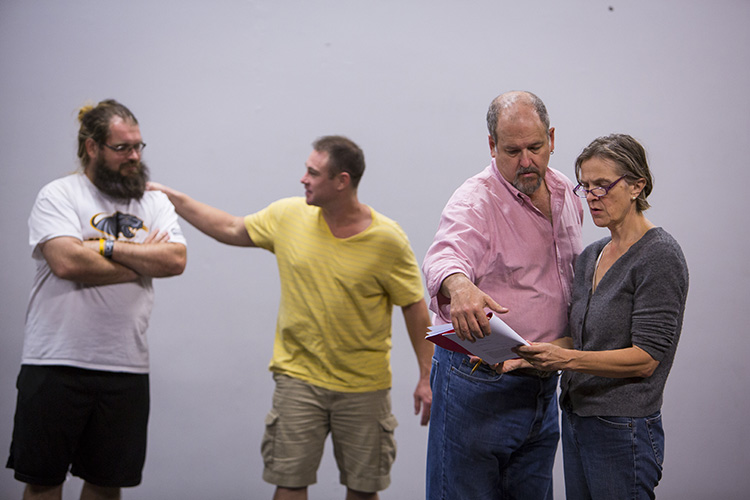 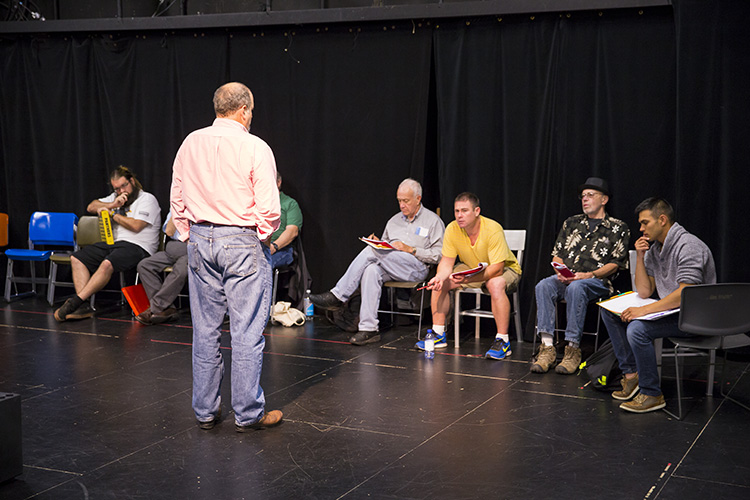 Veterans in the Feast of Crispian troupe range in age and come from all branches of the military. Here, UWM Associate Professor of Theater Bill Watson talks about an upcoming scene the group will be rehearsing. (UWM Photo/Derek Rickert) 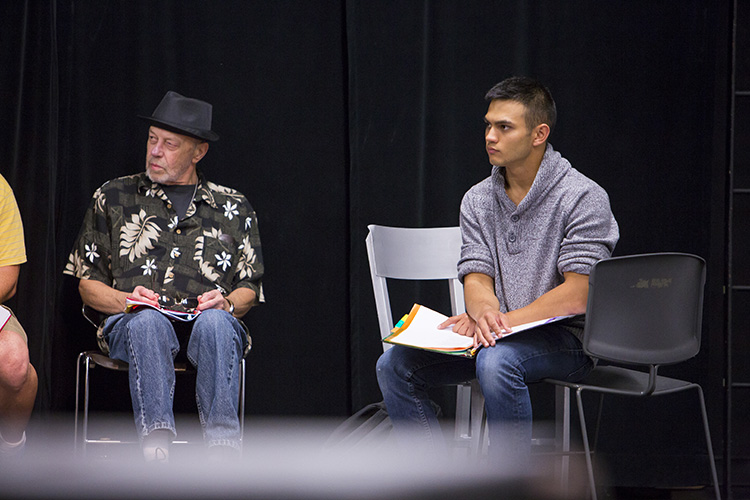 Johny Sherwood, (right) a UWM student and veteran, and Jan Masalowicz listen intently as their coaches discuss the script and the scene they're about to rehearse. (UWM Photo/Derek Rickert)

And Crispian shall ne’er go by,
From this day to the ending of the world,
But we in it shall be remembered-
We few, we happy few, we band of brothers…

Carissa DiPietro puts Shakespeare’s thoughts into her own words, but the meaning is similar: “I felt like I was surrounded by people who understood me and some of the things I’ve been through.”

DiPietro is one of a group of military veterans who are using Shakespeare to work through their own challenges, under the guidance of two UWM theater professors. Their troupe, Feast of Crispian will be performing “Julius Caesar,” the weekend of Oct. 30-Nov. 1.

Bill Watson, associate professor of theater, Nancy Smith-Watson, an actor and somatic body therapist, and Jim Tasse, senior lecturer in theater, founded the group to help veterans deal with depression, post-traumatic stress, addiction and reintegration into society. The name comes from the St. Crispin’s Day speech in Shakespeare’s “Henry V,” in which the king reminds his soldiers of their lasting bonds before the Battle of Agincourt.

Watson and Tasse, a veteran himself, volunteered their services to the Clement J. Zablocki Veterans Affairs Medical Center (VA), using rehearsal techniques developed and tested three decades ago by Shakespeare and Company in Massachusetts. The founders added their own unique approach to the use of Shakespeare’s texts – a therapeutic intervention. They held their first workshop nearly three years ago, and have worked with more than 250 veterans since then, doing weekend theater boot camps and small presentations for family and friends. The UWM-based “Julius Caesar” is the group’s first performance for the general public.

“We wanted to try out the idea…to see if performing Shakespeare had any benefits, and we found that indeed it was having great benefit,” Tasse said.

The statistics on challenges veterans face are eye opening: Each day, 22 veterans commit suicide and one-quarter of veterans end up homeless, said Watson.

The Shakespeare approach works on a number of different levels. The veterans, who come from all branches of the service and range in age from early 20s to seniors, build a community of trust. “In acting, as in the military, everybody is important to the production,” Tasse said. “Everybody has to do their job. They are a brotherhood and sisterhood.”

On another level, acting gives the veterans a chance to explore their own feelings through another character.

“It’s an opportunity to tell our stories, safeguarded by the script,” said Johny Sherwood, a senior theater major and veteran of Afghanistan. He volunteered to take part in the program after hearing about it while he was at the VA for non-combat related surgery. “You can go to the dark places within, but your own secrets are secure.”

The very words of Shakespeare give the veterans a chance to contemplate their own issues. Many of the plays and scenes used in workshops look at conflict and violence.

Jan Masalewicz, a Vietnam veteran who found Shakespeare boring in high school, has developed a new appreciation of the plays. “Things he wrote about in his plays are still true today… war and betrayal and love … all that stuff.”

The veterans and the professionals who work with them spend time exploring the themes of the plays, talking about how they relate to their lives, sharing their own emotions when they feel comfortable doing that, and learning to express some of their feelings through acting. The professionals work with the veterans, explaining the Shakespearean language and going on stage with them to give them the lines so they can focus on conveying the characters’ emotions.

Not everyone in the group experiences trauma or stress, but every member finds a level of comfort in working with fellow veterans on a challenging project.

Chris Nickrant, who served in the Air Force in the early ‘70s, has been with the group through almost every workshop. “It’s definitely expanding my horizons. I’m learning to reach out to other people.” The current play has also inspired him to read more about Shakespeare, Julius Caesar, Brutus and the assassination, he added.

“You can go through counseling for years and years and not really reach into the emotional aspect until you do something like this,” DiPietro said. “I’m not really a crier, but I’ve cried in this group. That’s how safe I feel. It’s absolutely incredible.

“With this play, I have a purpose. Something I look forward to. Something to be excited about… I haven’t felt that way in a long time.”