An anonymous donor committed $10 million in November 2019 toward a new research vessel for the School of Freshwater Sciences. The school’s current vessel, the 71-foot Neeskay, was built in 1953. She has served UWM, its researchers, her dedicated crew and the community for nearly 50 years. The gift, made through the Greater Milwaukee Foundation, equals the largest ever received by UWM. The amount covers half of the new vessel’s $20 million cost, which includes $15 million for construction and $5 million to sustain its operation. Once fundraising is complete, it will take 12 to 18 months to construct the vessel that will be known as the Maggi Sue. Freshwater Sciences Dean Val Klump shared his thoughts on the importance of both vessels to UWM’s mission.

Why is it important to have a research vessel?
Students and faculty here work on cutting-edge research to understand and protect the Great Lakes. This is the world’s largest source of surface freshwater. The Neeskay is our principal tool for studying these lakes. She is our floating laboratory, and we’re the only institution to operate a research vessel on the lakes year-round. Without it, we could not fulfill our responsibility to understand the Great Lakes ecosystem and ensure that the Great Lakes are protected for the future.

What are some examples of the work conducted on the Neeskay?
Well, for years we’ve been studying hypoxia, or “dead zones,” in Green Bay. This is when there is a lack of oxygen in an area that kills fish and other organisms. Using monitoring systems, water column and bottom sediment sampling, and onboard experiments, we’ve been able to map these dead zones and understand the conditions that lead to their formation, including the role of nutrient runoff from the watershed. This helps us accurately model how the bay works and simulate potential solutions to control these dead zones.

We’re also following the dramatic changes in Lake Michigan and studying the impact of non-native species on food webs and fisheries. And we’re researching how emerging contaminants – like pharmaceuticals, microplastics and nanomaterials – could affect the ecosystem or drinking water. Despite their size, the Great Lakes are highly susceptible to major perturbations and stress. 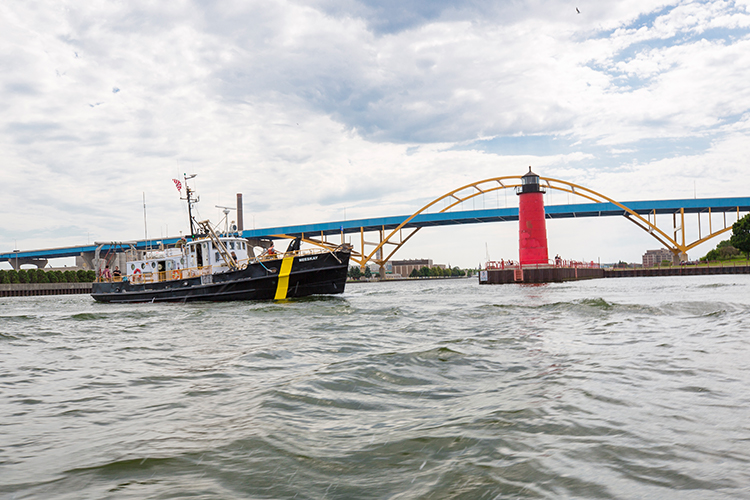 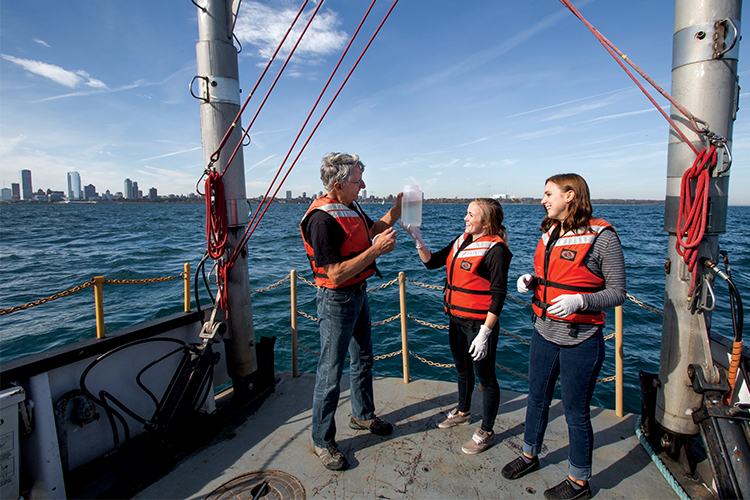 UWM has been using the Neeskay, a converted Army T-boat, as a research vessel for almost 50 years. (UWM Photo Alexis Amenson) 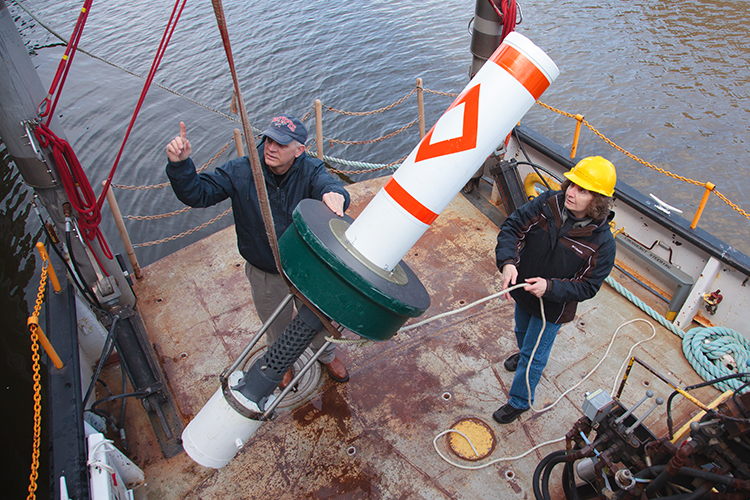 The Neeskay has been crucial to UWM's freshwater research, and the new Maggi Sue will enhance that research capability. (UWM Photo/Peter Jakubowski)

Tell us a little bit more about the Neeskay.
The Neeskay is a converted Army T-boat. She was used initially to transport cargo during the Korean War. Clifford Mortimer, our first director of Great Lakes studies, told me UWM purchased the Neeskay for $8,000 in 1970 – a bargain! It’s probably the oldest fully functional university-run research vessel operating on the Great Lakes. The Neeskay has been a great platform and an icon for the institution, but the Maggi Sue will be vastly more impressive and stand alone among Great Lakes research vessels.

How so?
The Maggi Sue will be the first multidisciplinary research vessel designed and built from the keel up explicitly for the Great Lakes, with state-of-the-art technologies, such as acoustics, high-resolution mapping systems and real-time data collection. She will be the first dynamically positioned vessel on these inland seas. This means her propulsion systems can be tied to satellite navigation, allowing her to stay in place despite the currents, winds and waves. This allows scientists to deploy remotely operated submersibles on the bottom for hours at a time without being pulled off station.

Also, right now, our duration at sea is limited and we can only routinely go on day cruises on Lake Michigan. The Maggi Sue will greatly expand our range, with the capability of 10-day cruises as far as Lakes Superior, Huron and Erie – anywhere in the Great Lakes. She will have classroom and lab space for up to 24 students. The lab on the Neeskay is a little more than 110 square feet. The Maggi Sue will have more than 800 square feet of permanent lab space, plus a deck large enough to carry portable labs for conducting specialized research. 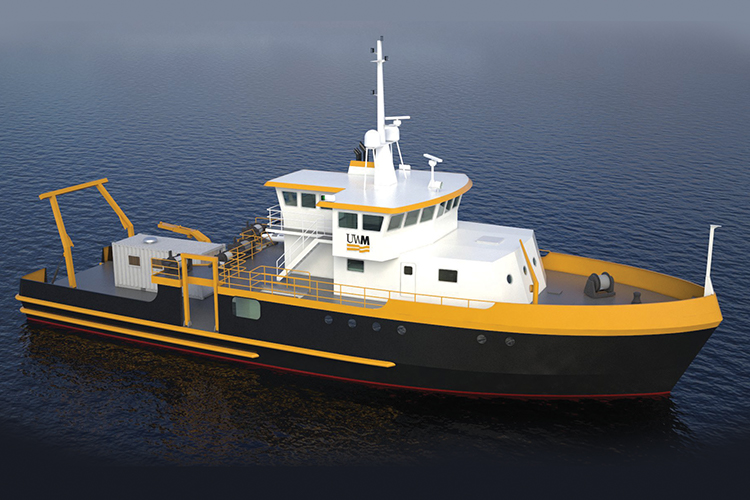 An artist's rendering of the 120-foot Maggi Sue, which will be the most advanced research vessel on the Great Lakes and the first designed specifically for conducting sophisticated research on these bodies of water. 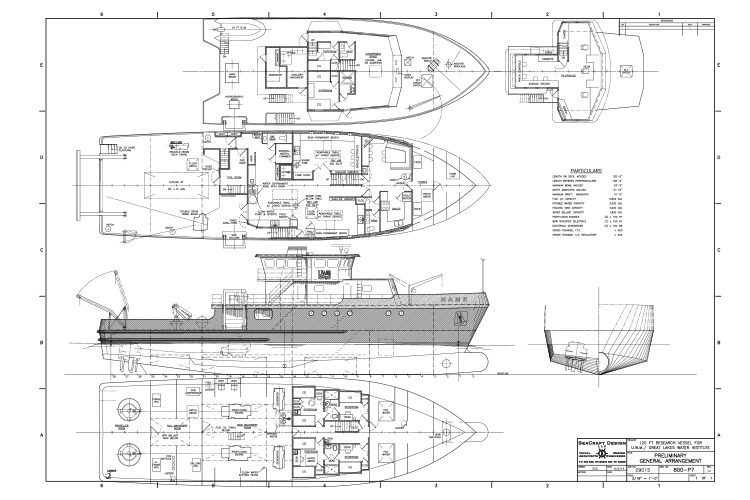 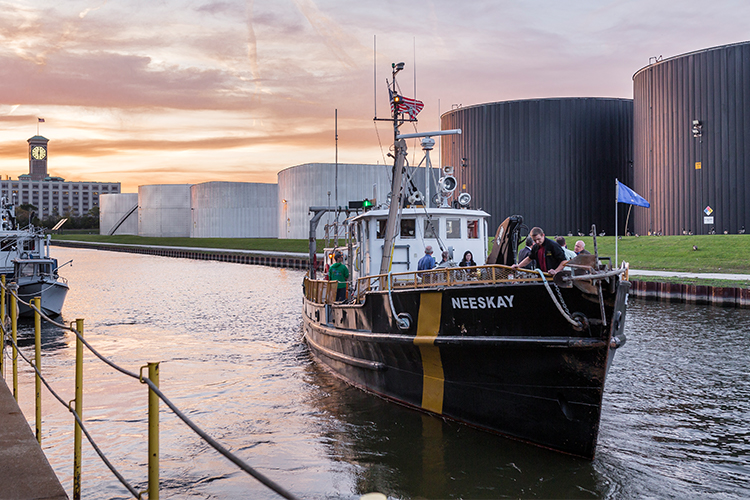