It takes 38 muscles to send a text message on your phone, 94 muscles to walk the dog and about 60 to put on a shirt. But in every case, the most important body part contributing to these actions is your brain.

Movement is possible because the brain and muscles exchange information through an electrical signal that’s unique to each muscle. Injury or stroke interferes with those electrical impulses, leading to a feeble response in the corresponding muscles.

Now, a new generation of robotics is helping debilitated patients regain much of their former abilities by using technology that essentially communicates with muscles when the brain cannot.

Exoskeleton robotics, a relatively new kind of assistive technology, involve wearable frameworks that cover the surface of limbs and boost injured muscles’ electrical impulses. You’ve seen fantastical examples of them in movies, conferring Herculean strength on ordinary people. But perhaps the greatest potential of this technology is restoring everyday abilities – a heroic achievement for those who need it.

Mohammad “Habib” Rahman, an assistant professor of biomedical and mechanical engineering, designs exoskeletons and a variety of other biomedical robots, some of which are used for rehabilitation and surgery. Two of his most promising devices are a glove that’s used in hand and finger rehab, and a customizable exoskeleton designed to fit the entire arm from shoulder to wrist.

Unlike most assistive tools for physical therapy, Rahman’s exoskeletons include sensors and motors, and they use artificial intelligence. The combination informs the exoskeleton how much motion the patient is capable of, and it allows the device to automatically amplify a muscle’s weakened electrical impulse to make up the difference.

Because every muscle contraction is different, these devices must adjust constantly. “It will not be the same electrical signal for the same person moving the same muscle, because each time, there will be different circumstances,” Rahman says. “For example, if the user is tired, the signal will be different than if they aren’t. The robot’s algorithms are based on dynamic signals, so they compensate for gravity more exactly.”

Robotic assistive devices must be able to handle passive rehabilitation – instances where the patient isn’t contributing any effort to movement – and also the shared efforts between the patient and the device. The controller, which is basically the robot’s artificial brain, calculates necessary forces like torque and provides that to the motor.

Rahman noticed that physical therapists often use many assistive devices intended for specific motions. So he and doctoral student Md Rasedul Islam have created one robot that can do the job of several.

It’s a multitasking exoskeleton that can be used for any of an entire arm’s eight movements that originate from the shoulder, elbow or wrist joints. Detachable parts allow the therapist to focus on a single joint or all of them at once.

The prototype offers features that are unavailable in current devices, Rahman says. Its modules are quickly assembled and customizable, meaning the device can be used for a wide variety of injuries or debilitation. Sensors provide therapists with range-of-motion information, and a session’s results are recorded so that PTs can monitor progress.

Interested in marketing this whole-arm exoskeleton, Rahman and Islam formed a team with senior scientist Rathindra DasGupta, doctoral student Md Assad-Uz-Zaman and undergraduate Fidel Sierra-Flores Jr., and they enrolled in the I-Corps program based at UWM.

Funded by the National Science Foundation, the I-Corps program helps academic researchers turn their discoveries into commercial products. In Wisconsin, the program is hosted by the UWM Research Foundation.

The versatility of the robot so impressed Scott Johannes, a UWM alum and physical therapist at Children’s Hospital of Wisconsin, that he became the team’s mentor.

“As physical therapists, we treat our patients by observing what’s not working,” Johannes says. “So, to have a modular tool that allows us to look for solutions a la carte is really valuable. As a clinician, I would want to work with one tool to get a complete assessment of the arm.”

More than 40 interviews with physical therapists, patients and caregivers helped the team identify a demand for a versatile device for upper-arm rehabilitation. The I-Corps program considered the demand substantial enough to award the team $50,000 for additional market research. 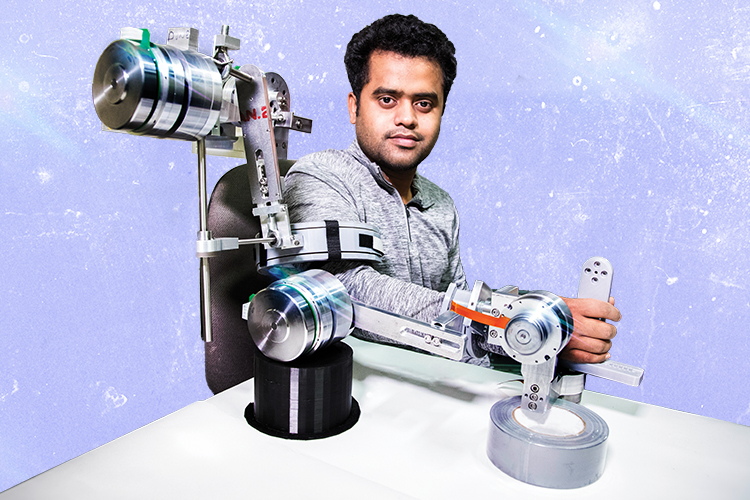 Rahman, who grew up in Bangladesh, fell in love with robots at a young age, and there was never a question about what he would study in college. After earning his bachelor’s degree in Bangladesh, he chose Saga University in Japan for his master’s degree because researchers there were pioneers in exoskeleton robotics.

In Japan, he discovered a more specific interest in building exoskeleton robots to help people reclaim their lives after illness or injury. While earning his doctorate at Université du Québec in Montreal, he began working with patients and observed that health care and disaster relief could benefit from assistive systems with artificial intelligence.

“The fact that we can program autonomous robots is fascinating to me,” he says. “I am also really passionate about design and about adding intelligence to the devices. There are so many needs they could address.”

One of those needs, Rahman says, is more time for therapy. The recovery process for patients is directly related to when and how often they engage in physical therapy. And yet, most patients only get it a few times a week in a medical facility.

“If you haven’t gained back your full range of motion within 12 months, it’s less likely that you will,” Rahman says.

Devices that could be used at home would help solve this problem. Rahman believes that if he can make robots that are affordable, covered by insurance, portable and lightweight, patients will do their physical therapy regimens more often and fewer will give up.

So he and his lab members are building these features into a second device – a glove that helps users significantly improve strength and agility in their fingers.

The prototype is still rough, but the idea is clear: The glove includes a series of wired pulleys to help the fingertips curl and knuckles bend, which assists in grasping movements.

“If the finger is rigid, any force pulling it forward will cause the finger to move only at the bottom joint, near your palm. So that’s why this device is a like a skeleton,” Assad-Uz-Zaman says. “It can lock the bottom joint so that only the top or middle joints of the finger are activated.”

The pulleys work in both directions, helping to constrict the weakened finger muscle and relax it as it returns to its original position, the way a healthy brain would.

Rahman sees such biomedical robotics as providing people the opportunity to maintain or regain their autonomy.

“It’s important that physically disabled individuals have the chance to take care of themselves,” he says.