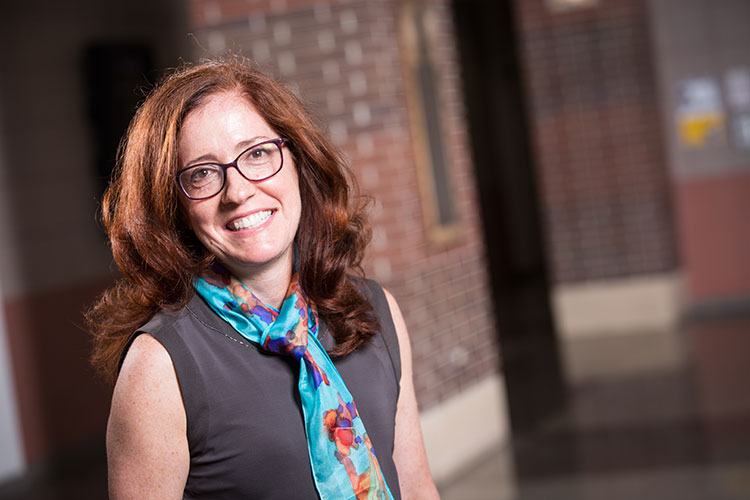 Laura Peracchio will be the inaugural Judith H. and Gale E. Klappa Endowed Professor of Marketing at the University of Wisconsin-Milwaukee’s Sheldon B. Lubar School of Business. (UWM Photo/Troye Fox)

Laura Peracchio, a professor of marketing in UWM’s Lubar School of Business, has received the inaugural Judith H. and Gale E. Klappa Endowed Professorship of Marketing.

Peracchio, who has taught at the school since 1990, focuses on transformative consumer research, which benefits consumer welfare and quality of life. She says that she wants to do research that has a social impact and makes the world a better place.

Her research has directly affected public policy. In 2006, she published her findings that consumers often couldn’t understand the nutrition facts on food labels. That information can be vital. For example, the amount of calcium in a container of yogurt is important to know for pregnant women and people with osteoporosis.

“Doctors’ calcium recommendations were in milligrams, but food labels don’t give milligrams: They’re in percent daily value,” Peracchio said. “So then you’re asking people to do math conversions in the grocery store. We had a sample of doctors, and even they had difficulty doing it.”

Peracchio and her collaborators presented their findings at a public policy conference in Washington, D.C. “Based on our research, the U.S. Food and Drug Administration put out new recommendations. The materials they give physicians now emphasize percent daily value.”

The professorship recognizes Peracchio’s research at UWM. “She is ranked as one of the most prolific scholars in terms of her publication activity,” said Kanti Prasad, dean of the Lubar School of Business. “She has had an esteemed career at UWM, and I am delighted to see her honored this way.”

The professorship also honors Gale and Judith Klappa. Gale Klappa graduated from UWM with a bachelor’s in mass communications in 1972 and received an honorary doctorate in 2011 for supporting UWM’s growth initiative. The professorship is made possible through gifts from the We Energies Foundation and the Wisconsin Public Service Foundation.

As the Klappa Endowed Professor of Marketing, Peracchio will continue her research on food availability and how nonprofits and other organizations provide food to people who need it.

In 2011, she collaborated on a paper about food well-being, which she defines as an individual’s or society’s positive psychological, physical, emotional and social relationship with food. Now she’s looking at what food well-being means for people who don’t always have access to nutritious food.

Milwaukee’s Hunger Task Force runs a mobile grocery store, called the Fresh Picks Mobile Market, which sells fresh produce and dairy in areas where those items are hard to find. Peracchio is working with a team of researchers from around the world to figure out how successful initiatives, such as the Mobile Market, come to be and why they succeed.

She wants to improve nonprofits’ marketing and, ultimately, create a model for successful nonprofit programming.

“The idea is not just to understand successful initiatives, but to develop a general strategy, so you can apply it elsewhere,” Peracchio said.