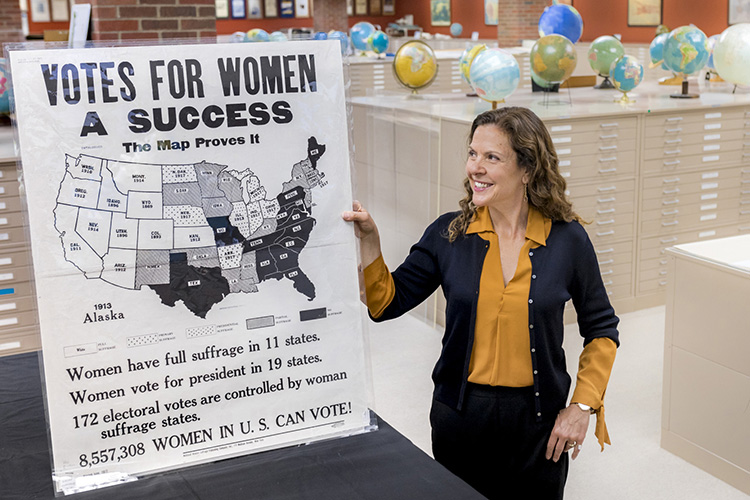 This year marks the centennial of congressional approval of the U.S. constitutional amendment giving women the right to vote. After Congress passed the amendment in June 1919, Wisconsin was the first state to ratify it a week later. (Tennessee was the final of the required 36 states to ratify, on Aug. 18, 1920.)

Carolyn Eichner, associate professor of history and women’s and gender studies at UWM, talks about the struggle that led to the 19thAmendment and its legacy.

What were the reasons some opposed the amendment?

Some people believed men belonged in the public, political sphere and women in the private sphere. But, in reality, working-class women worked both inside and outside of the home, and many elite women became reformers, campaigning  for abolition, temperance and child labor laws. Anti-suffragists feared what women would do with the vote, like support Prohibition. Some men did not want to share power; they rejected the democratic ideal of equal citizenship regardless of gender.

What are some key moments in the struggle for voting rights?

It took 72 years after the first women’s rights convention, the 1848 Seneca Falls Convention, for women to win full citizenship. They finally succeeded after World War I, at least in part in recognition of women’s participation on the home front. A number of states had already granted women’s suffrage on the state level.

The abolition and suffrage movements overlapped significantly. In 1840 the abolitionist Lucretia Mott attended the World Anti-Slavery Convention in London with her husband, but she, along with all of the other women, had to sit behind a curtain. She recognized that women needed emancipation too.

With Elizabeth Cady Stanton, Mott organized the 1848 Seneca Falls Convention to address women’s status. Because women’s suffrage seemed like such a radical concept, they only included it  in the convention’s Declaration of Sentiments after much heated debate. The abolitionist – and former slave – Frederick Douglass played a prominent role at Seneca Falls, supporting the inclusion of the vote in the convention’s declaration.

By the turn of the 20thcentury, the movement had divided again, this time based on politics and tactics. Carrie Chapman Catt led the more conservative side. Alice Paul, influenced by militant British suffragettes while studying in England, led the more radical side.

Suffragists marched in Washington D.C. and protested outside the White House. They faced violent opposition and arrest. Many went on hunger strikes in prison and suffered violent force-feeding. It was the brutal treatment of women of privilege that helped shift public opinion. The D.C. marches drew visibility, leading more women and men to support female suffrage.

Working-class women had always worked, but during World War I, they took over jobs long considered male-only. Women delivered mail, drove streetcars and worked in manufacturing. Afterward they were fired to make way for the returning men. But their patriotic contribution was recognized to the extent that it increased support for women’s enfranchisement.

How did the American push for suffrage compare with what was happening in other countries?

England, France and the U.S. claimed universal suffrage – but they did not count women.

The English suffrage struggle began after 1830s laws banned women from voting. It became a huge, multifaceted movement, radicalizing in 1905. Property-owning women over 30 got the vote in 1918. But it wasn’t until 1928 that all women gained the vote.

In France, the movement was small and developed later. Women did not attain suffrage until 1944. There were many feminists, but few suffragists, because the majority of French feminists – including Socialist feminists – focused, instead, on more concrete economic and social issues.

In 1893, New Zealand, became the first country with women’s suffrage. Finland was the first  European nation in 1906, followed by Denmark, Norway, Russia and Germany. Women in Afghanistan got the right to vote before U.S. women did.

It is vital to understand the global suffrage picture. Some U.S. states were early (Wyoming was the first, in 1869), but as a nation, we were not.

Did the amendment accomplish what was expected?

Opponents feared women would vote as a bloc. But most women of voting age didn’t vote. Younger women did vote as soon as they could. American-born white women slowly began voting, but black and immigrant women remained disenfranchised by racist practices including illegal poll taxes and other measures.

Most U.S. suffragists were white and middle class. Other feminists had more tangible goals than voting, including women’s wages and labor conditions.

The gender gap as we know it — women voting in higher percentages than men — did not appear until 1980, although starting in the 1960s, more women than men voted.

What are the legacies of the 19th Amendment?

While the amendment made women full citizens for the first time, in reality many women remained excluded by racial barriers.

The Equal Rights Amendment – guaranteeing equal legal rights regardless of sex – was introduced in 1921, and reintroduced in the 1970s, but failed. Today no constitutional protection exists against sex-based discrimination.

The centennial is important to raise awareness of the length and difficulty of the suffrage movement, of who was included, and who was excluded. Women were not “given the vote,” rather they worked and fought for it for three-quarters of a century. Feminists have undoubtedly made notable progress, but in terms of wages, political representation, social status, and rights over our bodies – among other concerns – there still is far to go.