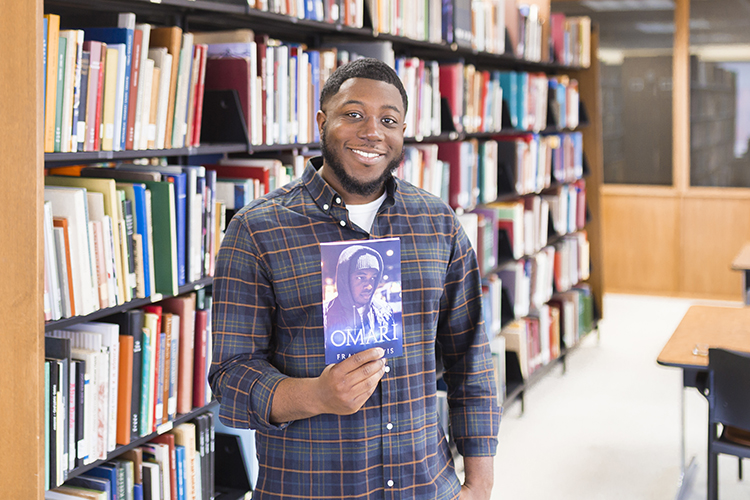 Midway through high school, Frank Lewis had a GPA of 1.8. But then he got himself on the right track, and a few years later, he’s now pursuing a graduate degree in social work at UWM and has written his first book. (UWM Photo/Elora Hennessey)

Most people wouldn’t see being sick as a good thing, but social work graduate student Frank Lewis views the semester of school he missed as a blessing in disguise.

At the time, he was a sophomore at UWM and hadn’t yet decided on a major, when recurring bouts of illness forced him to take some time away from school.

“Taking a semester off school slowed my progress to graduation,” said Lewis. “It was a dark time for me.”

Although he’d been writing since he was a child, only his mother and his teachers had seen his work. So he seized the time off as an unexpected opportunity to follow his long-held dream of writing a book.

“I had just read ‘Black Boy’ by Richard Wright, and I was really fascinated reading about his experiences in the mid-1960s in the South,” Lewis said. “I was inspired to write a similar story, but more modern, about a young black male just trying to understand life.”

Four years later, Lewis’ book “Omari,” about a young black man struggling to find his place in the world, was published and is available on Amazon and at Barnes & Noble.

“My time off school really propelled me to declare a major and gave me the time to complete the book. I realized that our experiences – good and bad – mold us into the people we become. I just want to encourage my generation that you just never know why things happen in your life – just trust the journey.”

His own journey – while not as crisis-ridden as that of the fictional Omari – has been filled with challenges.

He’s now in his second year of graduate school as a scholar in the Advanced Opportunity Program studying medical social work in the Helen Bader School of Social Welfare. He’s come a long way since he was an indifferent student at Rufus King International Baccalaureate High School in Milwaukee.

“I got caught up with wanting to hang out with popular people and not so much concentrate on my grades,” he said.

That changed when he was helping out in the school office during his final years of high school. “They had a board up, and would put a pin up for every state where a student was accepted to college. At that time, it dawned on me that I had lost sight of what my goal really was in high school.”

Through a great deal of hard work, he was able to raise his high school GPA from 1.8 to a 2.4 – still not good, he said, but enough to get an interview with a UWM recruiter who saw potential in him because of his hard-fought academic comeback.

UWM ‘opened doors for me’

He entered UWM with support from the Academic Opportunity Center, earning a 3.4 in his first year and becoming a Lawton Scholar. Even with the setback of that semester off, he earned his bachelor’s degree in social work in May 2017 and started graduate school that fall.

“I’m really grateful I came to UWM. It has opened doors for me, and I’ve had the opportunity to do a lot,” Lewis said.

Angie Izard, a student services coordinator in Global Inclusion and Engagement, met Lewis when he enrolled in her educational psychology study skills course. She was a major influence in encouraging him academically and in his writing, he said. Izard put him in touch with a small company in Atlanta, Tandem Light Press, which agreed to publish the book he’d written during his semester off.

A look the life of a young African-American man

“Omari” is grounded in Lewis’ experience as a young African-American man, but it isn’t autobiographical. His main character comes from a well-to-do family living in a gated community with two siblings. Like Lewis, Omari is succeeding, but his older brother has gotten into some difficulties. Eventually, Omari is faced with losing his comfortable life, taking care of his younger sister and reconciling with his brother. Lewis is an only child, but he wanted the book to reflect some of the challenges other aspiring young black men face, while also counteracting media stereotypes.

“Sometimes in the media we are depicted very negatively,” Lewis said. “I wanted to highlight that there are black males, such as me, who are ambitious, have goals and aspirations and are trying to help take care of their families even when they are going through things in life.”

While the book is grounded in the experiences of a young, black male, Lewis hopes the theme is universal. “I want people to think, ‘something like that happened to me.’ I think anybody – whether they are white, black or Hispanic – can relate to it.”

Meanwhile, Lewis is focused on finishing up his master’s degree in the spring, and starting an internship in medical social work at the Bread of Healing Clinic. He is also launching “Omari” at a series of book signing events – this spring and summer he was at the Wisconsin Black Historical Society and Museum in Milwaukee, the Milwaukee Public Schools alumni reunion, the Rufus King MVP program, Educators Credit Union, the Atlanta African-American Book Festival at Georgia State University and was a vendor at a production of “Fame, Jr.” at the Cannon Center for the Performing Arts in Memphis, Tenn.

He hasn’t started work on a second book yet, but is planning to continue to write.

“We are so proud of Frank’s achievements,” said Karen Parrish Baker, who worked with him in the AOC’s Summer Bridge program. “He has come a long way since his college start in the AOC Summer Bridge Program and has a bright future ahead.”