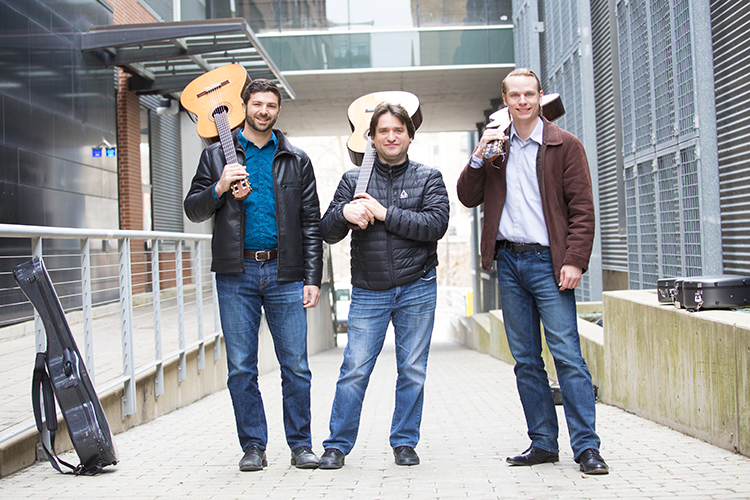 Evan Taucher (left) and Samuel Hines (right), both spring 2018 master’s graduates of UWM, credit Rene Izquierdo, associate professor of music and a performer in his own right, with helping inspire their success. (UWM Photo/Pete Amland)

Evan Taucher loves playing classical guitar, but he had entered very few competitions before coming to the University of Wisconsin-Milwaukee two years ago.

“Prior to coming to UWM to study with Rene (Izquierdo, associate professor of music), I hadn’t won prizes in any competition,” said Taucher. He’s now won prizes in seven of the 10 he entered — including three first prizes — during his time at UWM.

And the list goes on as students in UWM’s program make their mark in classical guitar – students have won a total of 54 prizes in competition since 2012, according to Izquierdo.

But for all of them, it’s more about the music than the competition. “It is competitive,” said Taucher, “but you also meet a lot of people that are most passionate about the instrument. Some of your best friends are going to be the people you’re working with in the future.”

Taucher, who’d played piano, saxophone and electric guitar when he was in elementary and high school, started taking classical guitar lessons as an undergrad at Florida State University. “To me it seemed like the perfect blend of what I loved about the piano when I was younger and the electric guitar.”

Hines started teaching himself to play in high school. “Every day I played a little more. And then during my senior year, I realized that this was what I wanted to do.”

Both students came to UWM because they wanted to study with Izquierdo.

“Rene was doing a concert on a weekend, and I asked if I could audition with him and have a lesson,” said Taucher, then at Florida State. “It was one of the best lessons I ever had.”

Hines lauded Izquierdo too. “He is not just a teacher, he is a mentor.”

Izquierdo encourages students to enter the competitions but leaves the decision to them.

“It is a chance to play, to perform, to be seen,” Izquierdo said. “They need to develop a good stage presence. If they want to make a living as a guitarist, they need to be able to do that.”

And, he added, the competitions give students goals. “It’s hard to be just endlessly practicing without a specific goal. So this is a way to keep them engaged. The fact that they won is a great thing, but it’s not necessarily what I am most interested in. It’s a statement of their hard work and our work together.”

It’s not all about talent, Izquierdo said. “I take pride in the students who are talented and able to play at a high level right away, but also in those who work hard and do well. There are a lot of things that talent won’t do that discipline and consistency will do. Where there’s talent and discipline – those are the great ones, like these two.”

The students, in turn, admire Izquierdo’s dedication to both performing and teaching. “He’ll fly in from China and be teaching in the next few hours,” said Taucher.

“It is hard sometimes,” admitted Izquierdo, who says he has found his passion in a blend of teaching and performing. “Part of the reason why I keep an exhaustive performance career is so I can stay on top of what is happening, improve my own playing.”

“When Rene says something about how to play something,” said Taucher, “we can trust that a lot because he actually can do it.”

All three are focused on improving the overall level of playing and interest in classical guitar.

“We have a lot of great things going on here,” said Izquierdo, who is seeking to bring more young people into the program and introduce the music to others through school and community concerts, a classical guitar society and ambassador programs.

“I feel like we are just beginning, and I won’t stop until we get the best program possible.”

Taucher received his master’s degree in May and Hines plans to finish at the end of this summer. Both will then be moving into their own careers in teaching and performing.

Izquierdo is proud of his students, but credits them for the hard work needed to compete successfully and build careers.

“We are the wind, but they are the ones steering the boat. They can take it wherever they want to go with it.”