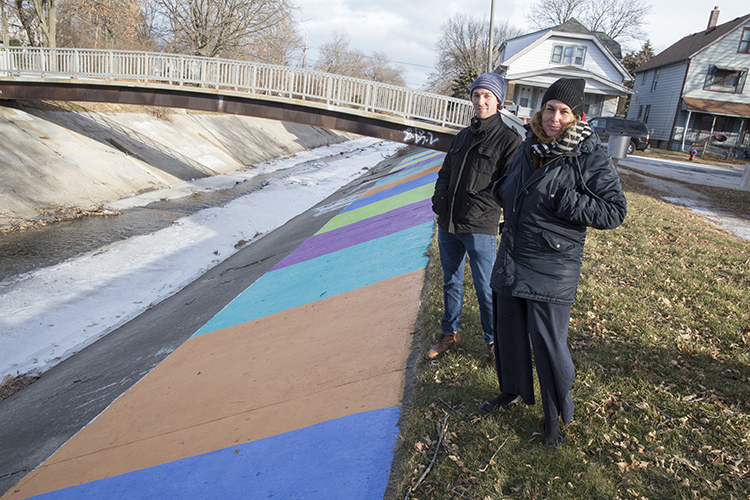 Graduate student Bill Noelck and Nikole Bouchard, an assistant professor in the UWM School of Architecture and Urban Planning, stand near a section of the Kinnickinnic River. The painting of the concrete channel is part of a project developed by Noelck and two other grad students, Joe Gaudreau and John Young, to spruce up the area to create an immediate impact while longer term revitalization of the river takes place. (UWM Photo/Troye Fox)

As the Kinnickinnic River crawls across Milwaukee’s south side, so too does the concrete channel that houses it.

The concrete went in along the river corridor in the 1960s with the hope of preventing flooding in the surrounding neighborhood. Floods persisted, but decades of dilapidation have left the concrete infrastructure eroded and unkempt. The section of river corridor near Pulaski Park is now scheduled to receive a much-needed facelift thanks in part to UWM’s School of Architecture and Urban Planning.

Nikole Bouchard, an assistant professor in the School of Architecture and Urban Planning, highlighted the revitalization initiative as part of the school’s 2017 Urban Edge Award. The Urban Edge Award Symposium presented three student design workshop projects and ideas — including the Kinnickinnic River corridor.

“We invited people from outside of the school and university to participate,” Bouchard said. “It’s great for our students to take something they did here, in an academic setting, and see how it can excite the general public and have an impact on their city.”

UWM’s involvement in the project focuses on the Kinnickinnic River corridor near Pulaski Park between South Sixth and 16th streets and extends roughly one block north and south of the river. The Milwaukee Metropolitan Sewerage District purchased and removed 78 homes in the area to widen the river’s path. That leaves roughly four city blocks available to create a unified green space along the river.

The Milwaukee Metropolitan Sewerage District’s Kinnickinnic River flood management project is the driving force behind the revitalization effort. The multiyear project is scheduled to address multiple areas of concern along the river, at a total cost estimated between $200 million and $300 million, according to MMSD’s final report on the project. The section of river corridor with which UWM is involved is expected to cost more than $22 million in construction alone.

The Kinnickinnic River watershed is the most densely populated, urbanized watershed in the state. The watershed is the land area along the river where any ground water would, eventually, drain into the river. By widening the river and deconstructing the concrete channel in favor of more natural water-management solutions, such as green infrastructure and permeable pavement, the MMSD hopes to alleviate flooding and create a safer, more beautiful neighborhood.

Sixteenth Street Community Health Centers’ Department of Environmental Health has been working closely in the surrounding neighborhood and with MMSD to accomplish these goals over the past several years. When they learned about the Urban Edge Awards, they saw an opportunity to activate an underutilized space and wanted to get involved, too.

“A handful of Kinnickinnic River Corridor residents and stakeholders participated in the event, and thought it would be great to collaborate somehow,” said Bouchard. “I thought the best way to push the project further was to do an independent study with students who were interested in taking these ideas to the next level.”

Three School of Architecture and Urban Planning graduate students, Joe Gaudreau, Bill Noelck and John Young, developed design proposals for a temporary park, Harrison Gardens, along the river corridor as part of that independent study project during the fall 2017 semester. Their plan was to design a temporary, small-scale public space that would maintain attention in the area while large-scale construction projects continued.

“Smaller projects like this can be implemented more quickly and go a long way in building excitement for something new and interesting in the community,” said Noelck. “For me, at least, it is a great feeling to be a part of the process.”

One of the first small projects implemented was the painting of the river’s concrete channel. Through a collaborative community process using the student’s visuals, Sixteenth Street Community Health Centers brought together Bouchard, the graduate students, local schoolchildren and neighbors to paint and prime the above-water sections of the concrete channel.

“Over the years, neighbors have seen the river flood many of their homes, attract illegal activity and become an area known more for its litter than the water that flows through it,” said Stephanie Mercado of Sixteenth Street Community Health Centers. “I am extremely excited about the immediate changes the KK project will bring, as well as the cascading effects that will follow as a result of having a clean and healthy river.”

Sixteenth Street Community Health Centers is working to bridge the gap between the project and the community it affects. A sizeable portion of the centers’ involvement includes community outreach for the beautification of the Pulaski Park area which, according to Sixteenth Street’s Kelly Moore Brands, will begin next year and is expected to continue through 2019.

“I think this project will create a wonderful asset within the community, creating a safer, more accessible, cleaner and healthier river for residents to enjoy,” said Moore Brands, environmental projects coordinator for the health center.

‘From waste to wonder’

“I’m interested in this idea of transforming things from waste to wonder, which was the theme of the 2017 Urban Edge Award,” Bouchard said. “For designers, rethinking the ways in which we produce, collect, discard and reuse our waste, whether it’s materials, spaces or places, is essential to ensure a more feasible future.”

Bouchard added that it is important to challenge the preconceived notions of “waste” and develop design ideas that reimagine the full spectrum that “waste” includes.

The Milwaukee Metropolitan Sewerage District leads the Kinnickinnic River corridor project, but funding and help have come from UWM, the Sixteenth Street Community Health Center and other community organizations.

The hope is to have smaller beautification projects along the Kinnickinnic completed by spring or summer of 2018, but large-scale construction may continue well beyond 2021.

Every two years, UWM’s School of Architecture and Urban Planning presents the Urban Edge Award. The award honors internationally recognized design professionals who bring fresh, innovative and effective thinking to the field of design, with a focus on urbanism. Bouchard developed, curated and orchestrated the spring 2017 program – a series of three, four-day design workshops with a concluding symposium.