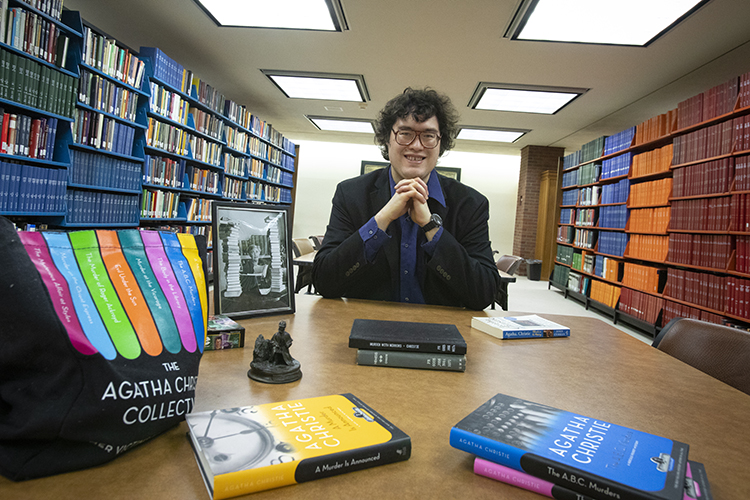 When Christopher Chan was 10 years old, his cousins gave him a beautiful, leather-bound book for Christmas – Agatha Christie’s classic “And Then There Were None.”

“I had no idea what it was,” he recalls.

He didn’t read it at first, but a few weeks later he was having free reading time at school and didn’t have a book. He grabbed his Christmas present off the piano in his living room and took it to school with him. “At about 25 pages in, I was hooked.”

And he has remained hooked. After finishing that first mystery, he immediately asked for more titles by the same author for his birthday, and with the help of a local bookseller tracked down Christie books that had become harder to find in those pre-internet days. “I found ‘Five Little Pigs,’ which turned out to be a favorite, at a bookstore across town.”

By September of seventh grade, Chan said, he’d found and read all the mysteries by the prolific writer crowned the Queen of Crime. Chan, who earned his master’s degree in library and information studies at UWM, remains fascinated with Christie and her works. About 15 years ago he started writing for the AgathaChristie.com website and serves as an international goodwill ambassador for it, reaching out to other fans.

Some of the pieces focus on speculating about what’s not in the books and what could have happened, like proposing a different ending for “Curtain.”

“I’m a private investigator who writes about only fictional crimes,” Chan said. “It’s a case of digging around and getting the story behind the book.”

With almost a century passing since some of the books were written, many of the political and cultural references aren’t always clear, and Chan helps others by providing background from his research. For example, he remembers a South Korean translator who couldn’t figure out what a “duck suit” was in a Hercule Poirot story. (Chan’s answer: It’s a type of summer suit made of a lightweight white fabric, made famous by Mark Twain.)

In the less mysterious part of his life, Chan holds multiple jobs —  he  teaches online courses at the University of Southern New Hampshire and the Chicago School of Professional Psychology and does some substitute teaching at his alma mater, University School of Milwaukee. He also does some research and writing of his own on true crimes.

He does background research on characters for television programs, and has given workshops on Christie and other mystery writers as part of theater productions. Most recently, Chan was the featured lecturer when the Peninsula Players in Door County put on Christie’s “A Murder is Announced” in the summer of 2019.  Since he’s seriously into mysteries of all kinds, he also writes for the magazine Gilbert, featuring the works of G.K. Chesterton. In addition to his UWM MLIS, he has a doctorate in history from Marquette University.

While modern forensic methods and communication technology have made some the dazzling tricks Christie’s sleuths pulled off implausible today, her books are still popular. The official AgathaChristie.com website claims her books outsell all others except for the Bible and the works of Shakespeare. She is credited with writing 66 novels, 14 short story collections and the world’s longest running play, “The Mousetrap.” More than one billion copies of her books are in print in English and another one billion in other languages, according to the site.  Some have even been turned into video games. The website averages a quarter million unique visitors a month, according to Chan.

“She has such a wide fan base around the world, and in different cultures,” Chan said. Her works have been translated into multiple languages and adapted for TV in Japan and France and even made into a Bollywood musical, he notes. “Every one of her novels is still in print.”

Her characters, particularly the sleuths Hercule Poirot and Jane Marple, continue to fascinate fans. Poirot is one of the few fictional characters to ever get a front-page New York Times obituary, and fans, like Chan, still argue on discussion boards over which actor portrayed him best and how exactly his famous mustaches should look.

And although Christie died in 1976, young fans keep finding Christie like he did when he was 10,  Chan said.

“The discussion boards have comments from high school and college students. When I went to see the newest movie version of “Murder on the Orient Express,” I saw people of all ages and backgrounds there.” Another movie, “Death on the Nile,” based on a 1937 Christie novel, is now in production.

The settings in English country houses may seem dated and some of the portrayals of minor characters reflect the prejudices of the time, but the mysteries have held up for nearly 100 years because they are entertaining, Chan said. And “she always plays fair with the reader about whodunit. She lays everything out.”

Agatha Christie always thought outside the box, Chan added. She baffled readers by breaking rules that people assumed existed — as she did in solutions to “The Murder of Roger Ackroyd” and “And Then There Were None.”

“She wrote for a long time, and she kept writing well,” Chan said. “You have all the information the detective does, but every Agatha Christie is a challenge.”