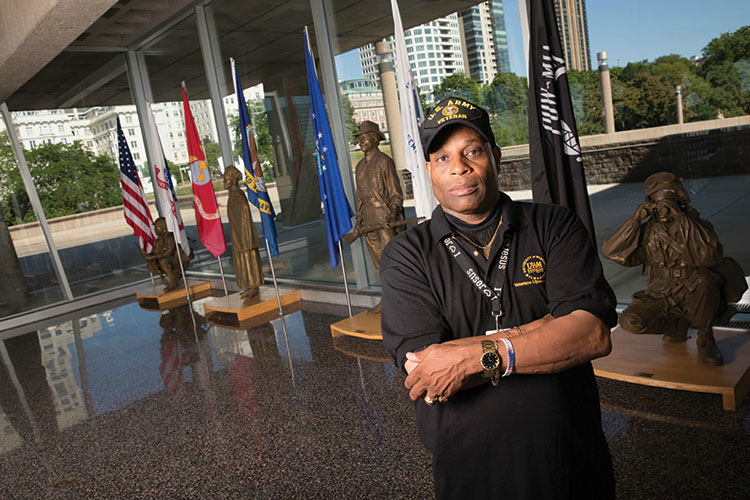 Kevin Evans went from being a homeless Army veteran to a UWM graduate who uses his degree to help vets now struggling with the same issues that he once did. (UWM Photo/Troye Fox)

Near the lowest point of Kevin Evans’ life, he received the direction that would make him the man he is today. A staff member at the Clement J. Zablocki VA Medical Center looked at Evans, surveyed his problems, and saw someone with untapped capacities for leadership, perseverance and empathy.

“He told me,” Evans recalls, “‘You would be a great success in social service, working with people, if you went back and got your education. Also, you know a lot about the street life, and that’s great for helping people out.’”

The man’s suggestion started Evans on a journey that led to a master’s degree in social work from UWM. And he couldn’t have earned that degree in 2011 without assistance from UWM’s Veterans Upward Bound program. Since then, UWM has opened its Military and Veterans Resource Center, or MAVRC. Both initiatives offer a broad range of services for veterans, and more than 1,000 of them are enrolled as UWM students.

Now, Evans uses his degree to help fellow veterans who are stuck in ruts similar to those he escaped. He works for the nonprofit Center for Veterans Issues, which assists vets through a variety of programs, including counseling, housing services and job skills.

Evans was discharged from the Army in 1986 after a 10-year hitch as a wireman and supply clerk, which included a tour in South Korea protecting the Demilitarized Zone. He was eager to get home to Milwaukee, but Evans soon realized he had no idea what to do next. Unable to adjust to civilian life, he struggled with substance abuse and reintegration problems. He became estranged from his family, eventually drifting into homelessness on and off for much of a decade.

After that visit to the VA, Evans initially found the advice he received offensive. “How can this young white guy tell me anything,” he recalls thinking at the time. But his thoughts returned to what the man had told him: “What he was saying, he made a lot of sense.”

With encouragement from his mother, the big step came in 1997, when Evans reached out to the staff at VETS Place Central, a transitional housing service run by the Center for Veterans Issues. It provides temporary shelter to displaced servicemen and women. For Evans, taking that step wasn’t easy.

He didn’t know then that he’d someday become one of the helpers.

A social worker at the Center for Veterans Issues, or CVI, asked Evans what he wanted to do with his life. He told her he wanted an education so he could help people in situations similar to his. So, with CVI’s help, he enrolled in Veterans Upward Bound, a federally funded educational program that teaches veterans core learning skills in preparation for college coursework.

“We started doing the reading, writing and arithmetic,” he says. “Three areas that a lot of veterans are very slow in now. I went there and got all my stuff up to gear.”

He had tried college before, right out of Milwaukee’s North Division High School, where he was a champion wrestler. He earned a wrestling scholarship to UW-Parkside, but he didn’t maintain his grades and withdrew to enlist in the Army.

This time, he was determined to see a different result, and this time, he found that he liked school. Evans stuck with Upward Bound, slowly gaining proficiencies in key areas. Soon he began to collect diplomas. He received an associate degree in human services from Milwaukee Area Technical College in 2001. Then came a bachelor’s in criminal justice from Springfield College in Milwaukee.

“I guess I was a little older and wiser, and I really wanted to set some stakes in my life,” Evans says.

A few years after completing his undergraduate degree, Evans learned of UWM’s master’s program in social work. He realized it was the opportunity he was searching for, a path to landing a job in which he could help others in difficult situations.

“I wanted to change my whole life story,” he says. “I felt I was a menace to society and I wanted to give back.”

He enrolled, only to soon find himself struggling with the advanced coursework, partly because, he later discovered, he had a learning disability. Determination and personalized coping techniques had seen him through his previous degrees, but that wasn’t enough in grad school. This, coupled with something of an outsider status as a veteran and nontraditional student, suggested Evans had more difficult times ahead.

Jayne Holland, assistant director of community outreach at MAVRC, says those types of initial school experiences are common among former military personnel. “When [vets] leave the military, they’re leaving behind a place that’s very structured,” she says. “They were told what to do every day. They knew as soon as they woke up what they had to do that day. Then when they come to the college campus, it’s very unstructured. You are told you’re going to go to these classes, but the rest of it is up to you. So they lose some of that sense of purpose.”

MAVRC, colloquially called “maverick,” launched at UWM in 2013 and acts as a one-stop shop for veterans seeking assistance throughout their academic careers. It briefs vets on the application process at the Military Education Benefits Office, guides them through campus life, and connects veteran students and their spouses to employment resources.

“We try to help them every step of the way in every place they might need it,” Holland says. MAVRC also educates UWM faculty about veterans’ needs and behaviors in the classroom.

UWM educates more veterans than any other four-year institution in the Midwest, with more than 1,000 enrolled annually. UWM is also one of only three universities nationwide to participate in all three major veteran support programs: Upward Bound, the Pat Tillman Foundation Scholars program and the Department of Veterans Affairs VetSuccess on Campus program.

The average age of veterans enrolled at UWM is 30, and 20 percent are female. The graduation rate hovers at about 90 percent. Holland says those figures probably underestimate UWM’s impact because they only look at veterans using federal benefits.

Although Evans was at UWM prior to MAVRC’s inception, Upward Bound introduced him to resources like the UWM Writing Center and encouraged him to speak to his professors about his learning disability. Instructors accommodated him in ways that didn’t leave him at a disadvantage. The adjustments allowed him to thrive.

“I never missed a day of school,” he says. “And I catch onto stuff fast. If you’ve ever been in the military, jumping out of airplanes and helicopters, you’ve got to catch on fast.”

Lisa Berger, an associate professor at the Helen Bader School of Social Welfare, advised Evans and instructed him in two courses. “He was a student who was so happy just to be in school developing himself,” she says. “I really respect his commitment to his community of veterans and giving back. I think it makes him dedicated to what he does, and he’s driven by his own personal mission.”

He also took point on recruiting classmates for study groups, eliminating a difficulty Holland identifies as unique to many veterans. “They’re used to working as a team with a group of people in their unit and being part of that team. When they lose that support network, some of them struggle a little bit. They feel alone,” she says.

Evans says working around younger students brought him strength. Berger figures it was mutual. “His enthusiasm is rather contagious,” she says.

Evans took his newly minted master’s degree to a job at CVI, the same agency that ran the housing program that helped him nearly two decades ago. Working as an outreach specialist, he spends much of his time offering help to homeless vets. Some accept it. Others aren’t ready.

“One lady gave me a story one day,” Evans says. “I said, ‘I’ve got this housing for you to stay at.’ She said, ‘What did veterans used to do when we were in the service out in the field? We slept out in the woods.’ She wanted to continue sleeping out in the field. But I still gave her my business card and everything else, and told her that if she ever needs our help, she knows where our organization is.”

Working with vets facing obstacles he once faced has allowed Evans to appreciate how far he’s come over the past two decades. But the proximity to his former life also keeps him closely tethered to the idea about how short a fall it is back to that situation. “Every morning when I get up, my mind is already set,” he says. “I’m not going back today.”

Because he has better plans for the day.

“It makes me feel good when I go home at night knowing that I touched somebody else’s life,” he says. “I had a gentleman a couple months ago. His wife ran up to me after church and said, ‘I want to thank you for helping my husband. Now me, him and our daughter are back together.’

Activities continue all week to honor veterans and military service members at UW-Milwaukee.

Serving Those Who Served Military and Veterans Brunch

Monday, Nov. 7, through Thursday, Nov. 11 at the Student Union Concourse.

Friday, Nov. 11, from 9 a.m. to 3 p.m. in the office of the Military and Veterans Resource Center in the Student Union, Room WG-99

For more information, contact MAVRC at 414-229-7211, email Jayne Holland at hollan38@uwm.edu or go to the Milwaukee Veterans Week website.