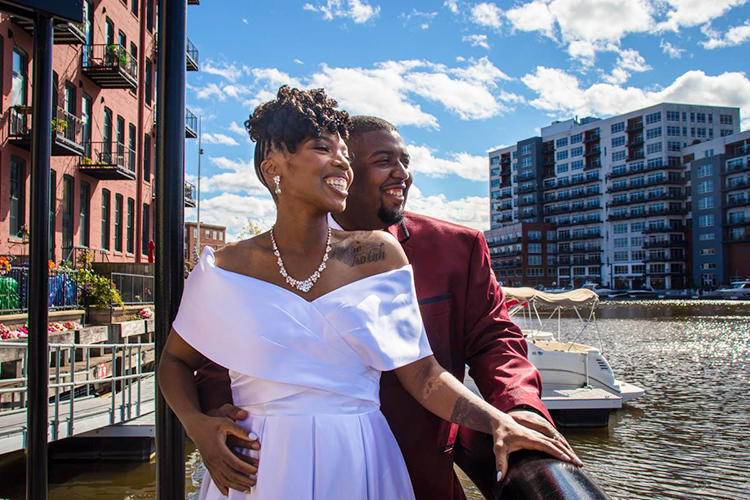 Olivia and Kareem McCants met in East Tower of Sandburg Hall in 2011 at a mutual friend's game night. They didn’t see each other again for an entire year. Olivia started as a freshman in fall 2012, and became involved with an on-campus job. As a junior, Kareem was already established at UWM with involvement in several organizations and working on campus, which is how they crossed paths again. Their relationship shifted from casual greetings to long conversations, and then a budding friendship that blossomed into a relationship. Nearly 10 years later, they are now married with two children and a dog, graduated from UW-Milwaukee and prospering in their careers. Though they have faced many challenges along the way, they are forever grateful for that random meeting and being students at the University of Wisconsin-Milwaukee. (Photo courtesy of Olivia and Kareem McCants) 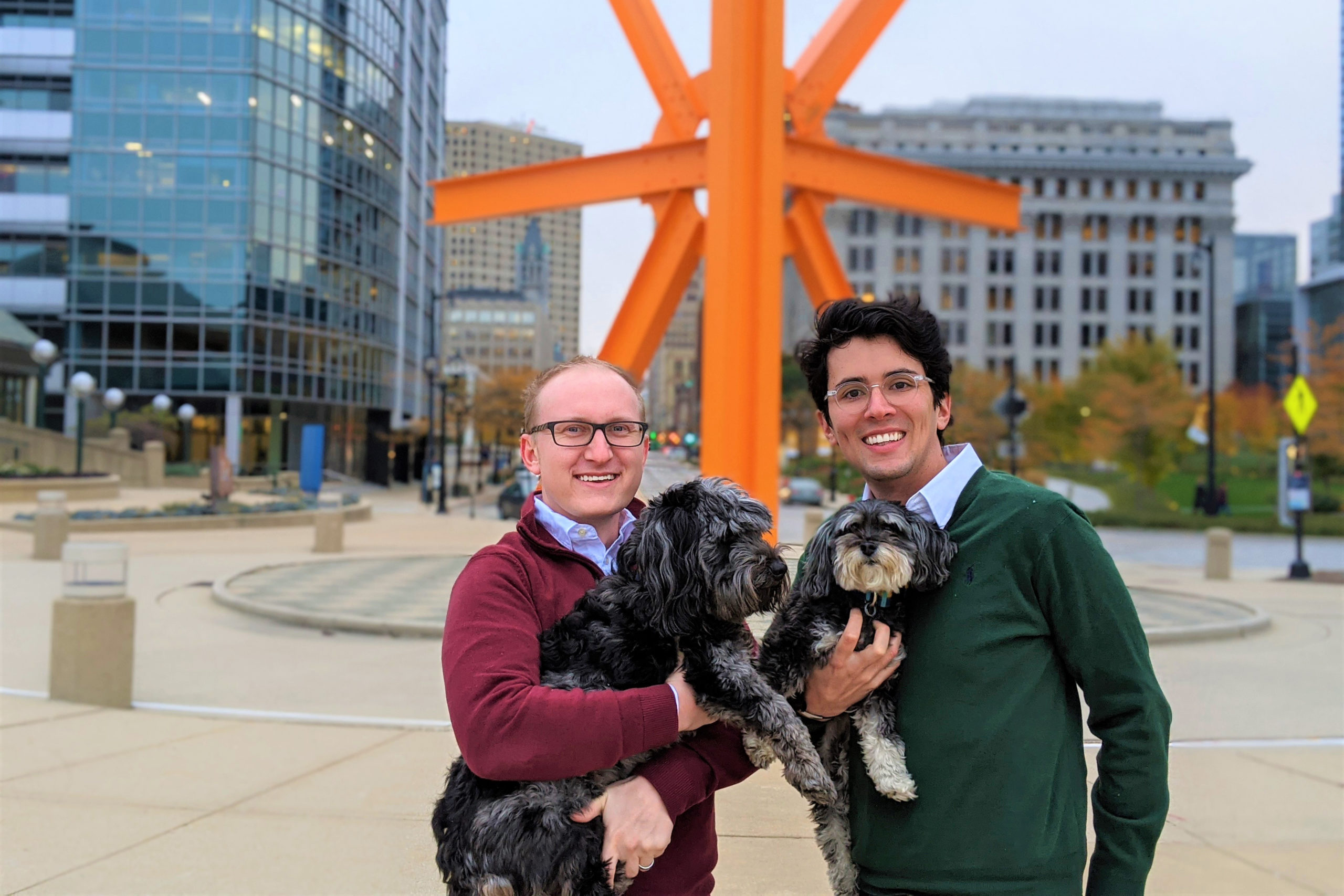 Vince Tripi and Marco Briceno didn't technically meet at UWM, but they did catch each other's eyes there. Marco was studying for his statistics final in the LGBT Resource Center when Vince burst in to announce that he’d finished a research paper on camp for his Queer Theory class. Following a little research on Facebook, Marco tracked down and messaged Vince asking him on a date. That was back in 2009, and their connection to what is now the LGBTQ+ Resource Center hasn’t stopped: They returned to get engaged in the sight of the director and her new boss, the dean of students, on his very first day on the job; and the then-assistant director officiated at their wedding in 2014. Vince and Marco are active volunteers and donors in the community: Vince is director of education and outreach for Milwaukee Pride, and Marco is vice president of the Milwaukee LGBT Community Center. (Photo courtesy of Vince Tripi and Marco Briceno) 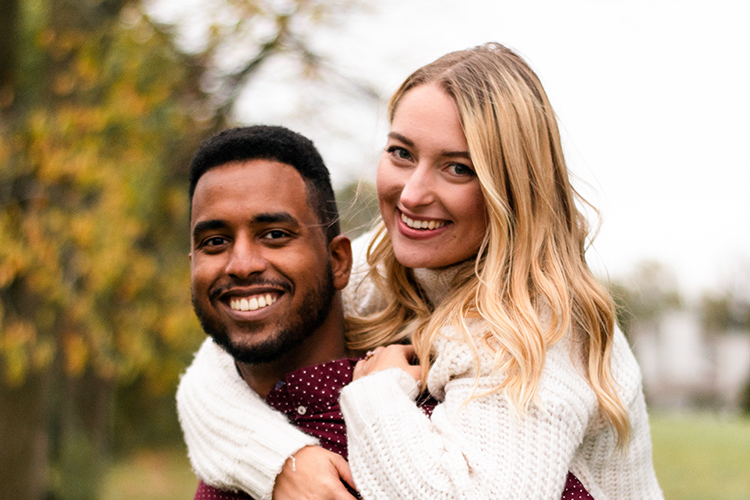 Who would’ve known that when Cortnie and Joe Addisu met three years ago in the Lubar School of Business that they would be married now? Joe and Cortnie first met on a Thursday night for Cru, which is a community of Christians. The two were both student leaders, and as they journeyed through college, church, friendship and life together, they also grew closer to one another. During their senior year, Joe took the risk of moving the friendship to relationship and asked Cortnie on a date.... and the rest is history. They got married this January, and it’s all thanks to that first encounter at UWM. (Photo courtesy of Cortnie and Joe Addisu) 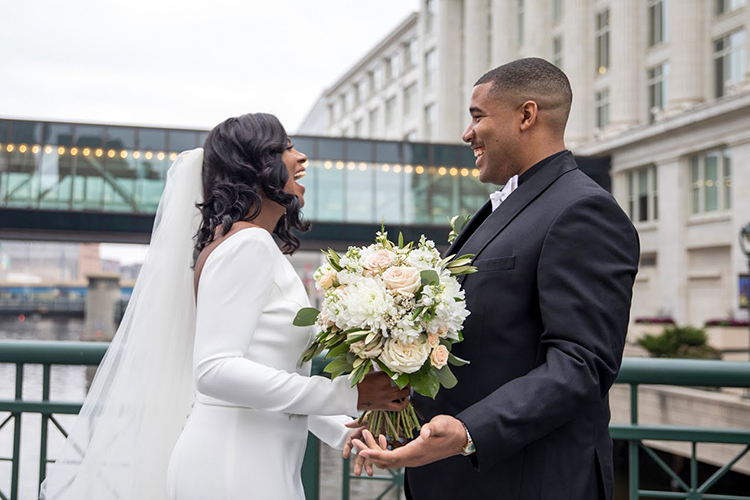 Ciera and James Edwards first met in high school and remained casual friends. They later reconnected when they both attended UWM. James and Ciera would study in the Golda Meir library after classes just about every day. Over time they became close and eventually started to become more serious. They decided to start dating when Ciera was finishing up graduate school and James was a semester away from completing his undergrad in computer science. Dates would include going to local bars and restaurants near campus, including Eastsider, Oakland Gyros and Falbo Bros Pizzeria. After Ciera started working in the UWM Panther Shop, James would visit her on her lunch breaks and they would eat at Taco Bell in the Student Union. The two dated for two years before James proposed to Ciera on a family trip to Las Vegas, and a little over a year later they married in downtown Milwaukee. (Photo courtesy of Ciera and James Edwards) 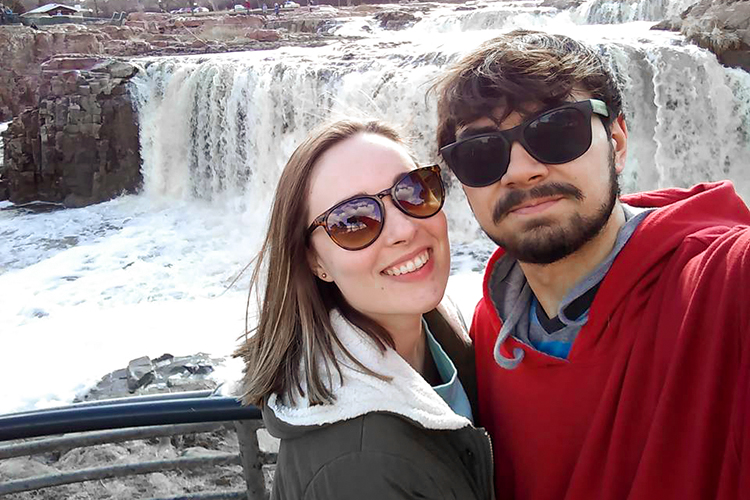 Olivia and Mikey Striepling initially met on the UWM Class of 2019 Facebook page in a thread of comments debating whether longboarding or skateboarding was better. Mikey was convinced he was right, and that led to more interesting Facebook conversations before they met in person on the last day of move-in in fall of 2015. Olivia was sitting on the front steps of Sandburg when Mikey saw her for the first time, and they decided to explore campus together. Since then, they've had so many more adventures. From road trips to obscure cities over spring break, to owning a tortoise – and then a dog, and also a cat – together, and finally tying the knot in October 2020. (Photo courtesy of Olivia and Mikey Striepling) 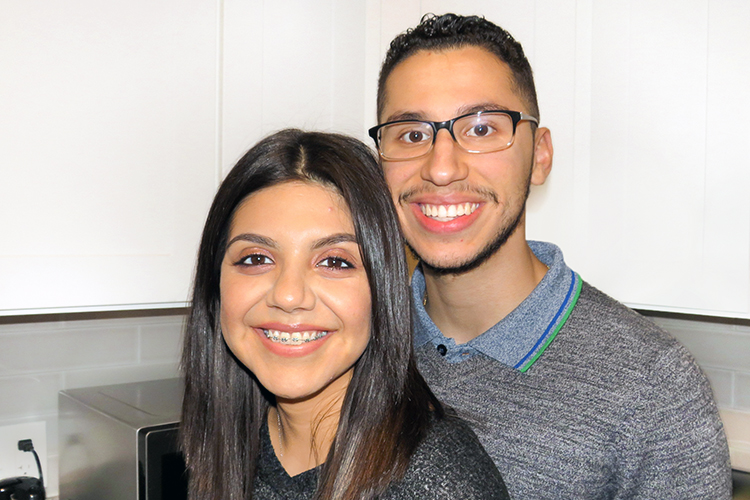 Jessica Solorzano and Michael Vazquez first met at UWM through a student organization, Latinx Student Union, where they were both executive board members. Michael served as secretary and Jessica as community service chair. Through their bond for the love of the organization and their commitment to creating and fostering community, they fell in love! ((Photo courtesy of Jessica Solorzano and Michael Vazquez)

Meet six couples whose love stories all share a common thread – their time at the University of Wisconsin-Milwaukee.

From study sessions at the Golda Meir Library to first meeting virtually on a class page, to catching each other’s eye at the LGBTQ+ Resource Center, their stories will have your heart blooming with love this Valentine’s Day.