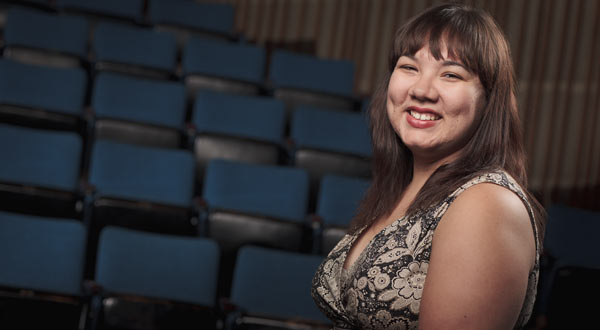 Layna Davis had reached a turning point when she came to the University of Wisconsin-Milwaukee as a transfer student in the Peck School of the Arts Theatre program. She arrived from New York, discouraged and depressed about her dream of building a career in the theater, she says. Her experiences at UWM have changed all that.

“Now that I’m here I can see it all happening. I’ve had a lot of doors opening up that were never there before.”

Davis, a senior, grew up in Door County, before heading to Drake University in Iowa to study theater, her passion since a summer-school reading camp. “I’ve always been a theater nerd.” However, after two years in Iowa, she decided to move to New York to seek more theater experience outside the academic world. Eventually, though, she became discouraged, says Davis. The city was expensive, she wasn’t finding opportunities or connections, and she felt the need for more formal training.

“I’ve had some really great teachers at UWM and I’ve learned a lot from them. They’ve really helped me learn to not get discouraged and work toward a career in the arts.”

So she headed back to Wisconsin, attracted by UWM’s well-regarded undergraduate Theatre program and Milwaukee’s thriving theater scene. “It seemed like the logical place to try my wings professionally,” says Davis.

Unlike many programs, UWM offered opportunities to act in plays and even direct at the undergraduate level, says Davis. Her professors also helped her connect with the local theater community. Since starting at UWM, she’s acted in several plays at the university, done an internship with the Milwaukee Chamber Theatre and worked as a teaching assistant at First Stage Theatre.

This semester, she’s directing a play, “Some Girl(s),” by one of her favorite playwrights, Neil LaBute, as part of the Peck School’s Year of the Arts celebration of its 50th anniversary. “Some Girls,” which runs, Nov. 8-11 at Kenilworth Square East, 1925 E. Kenilworth Pl., focuses on a commitment-phobic writer who’s visiting a string of ex-girlfriends. The play’s style – a series of vignettes – and its focus on relationships make it a good fit for university students as well as the general community, says Davis.

UWM’s many community connections have enriched her experience, says Davis. “There are a lot of really creative people here,” she says. In particular, the partnerships and outreach with communities of color have helped her tap into her own Latina roots. “I used to think of my ethnicity as something that might bring me down,” she says, but she’s now getting to know the active local Latino community through theater. “Michelle Lopez-Rios [associate professor of voice and speech] has been a really great source of information and support.”

In addition to carrying a full courseload and directing a play this semester, she works at the university’s School of Continuing Education and will be an assistant director of a Renaissance Theaterworks production, working with Lopez-Rios. All of her professors have encouraged her aspirations and made her UWM experience a good one, says Davis. Her goal after she earns her B.F.A.is to head for graduate school to earn her master’s degree, eventually hoping to work as an actor and acting teacher for others.

Her experiences teaching children through the First Stage program – a connection she made through the Theatre faculty at UWM – sparked her interest in teaching, she says.

“I’ve had some really great teachers at UWM and I’ve learned a lot from them. They’ve really helped me learn to not get discouraged and work toward a career in the arts.”

“Some Girls” is one hundreds of dance, music and theater performance, art and design exhibitions, film screenings  and other arts events that highlight the Year of the Arts. More than 50 community partners are involved. See www.yoa.uwm.edu for a complete schedule of events and more information.