Producing enough food is a national priority in populous countries like India. So much so that the government provides subsidies to offset the cost of chemical fertilizers. Farmers rely on the fertilizers to maximize crop production and keep food prices affordable.

But UWM microbiologist Gyaneshwar Prasad, who is from India, worries. Early in his career, he studied bioremediation – natural ways of cleaning up pollution – and he could see the problems that came with such a reliance on chemical fertilizers.

Making artificial fertilizers requires a disproportionately large amount of fossil fuel, and fertilizers become less effective once a certain saturation point is reached. Moreover, an estimated 20 percent of those chemicals end up in agricultural runoff that pollutes water supplies.

“There’s got to be a way to feed the world in a more sustainable fashion,” says Prasad, an associate professor of biological sciences.

Prasad’s research centers on finding such a solution. To do so, he’s following a path that nature has already laid out, and it has tantalizing possibilities.

For most plants, growth is limited by the amount of nitrogen available in soil, which is depleted over time. But legume crops – such as beans, peas, lentils and alfalfa – have a partnership with certain soil microbes.

These microbes provide the plants with an unlimited supply of nitrogen in exchange for nutrients that the plant makes from photosynthesis. This mutual back-scratching, known as nitrogen-fixing, creates a natural fertilizer for the plant, but it mainly happens with one kind of bacteria – rhizobia.

Discovering how to transfer rhizobia’s nitrogen-fixing ability in legumes to other staple crops has become something of an agricultural holy grail. Half of the world’s food energy comes from varieties of three cereal crops: wheat, rice and corn.

“If we were able to reduce the amount of chemical fertilizer needed to grow cereal crops even just a little,” Prasad says, “the impact would be huge, especially in developing countries where individual farmers with small yields would benefit the most.” 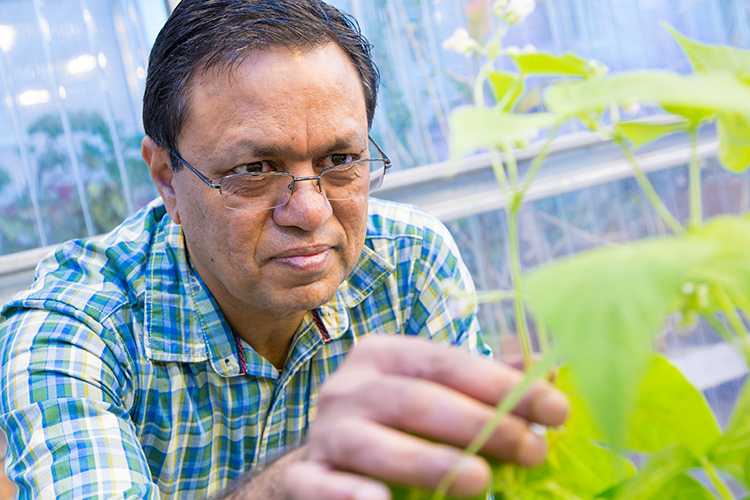 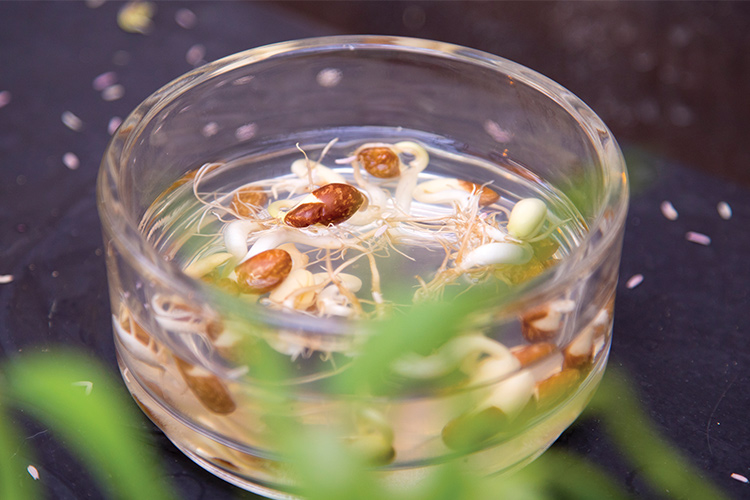 The roots of a simple soybean plant could hold the key to significant advancements in sustainable agriculture. (UWM Photo/Pete Amland) 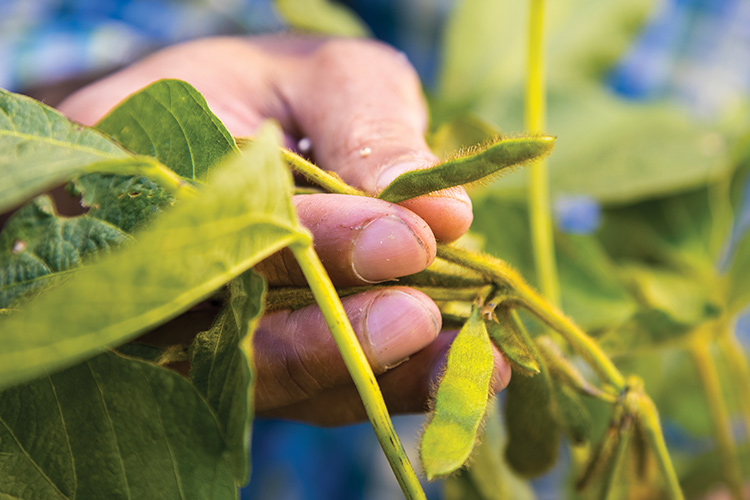 Soybeans and other legumes interact with the bacteria rhizobia in a way that creates a natural fertilizer for the plant. (UWM Photo/Pete Amland) 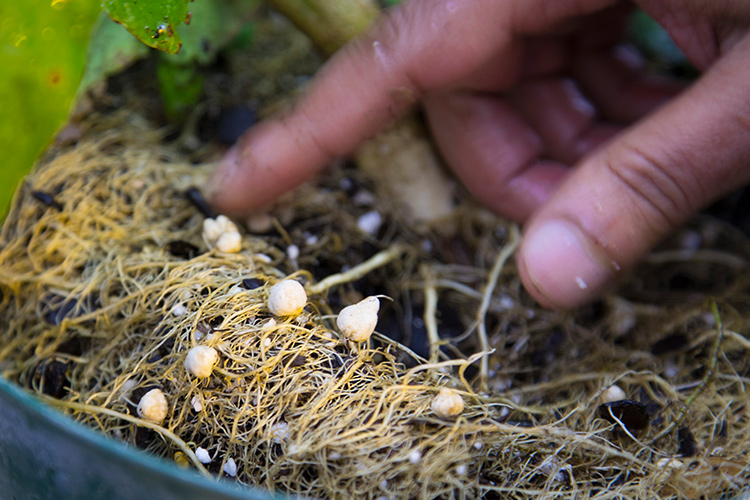 After rhizobia bacteria colonize the roots of a legume, they create these root nodules. (UWM Photo/Pete Amland) 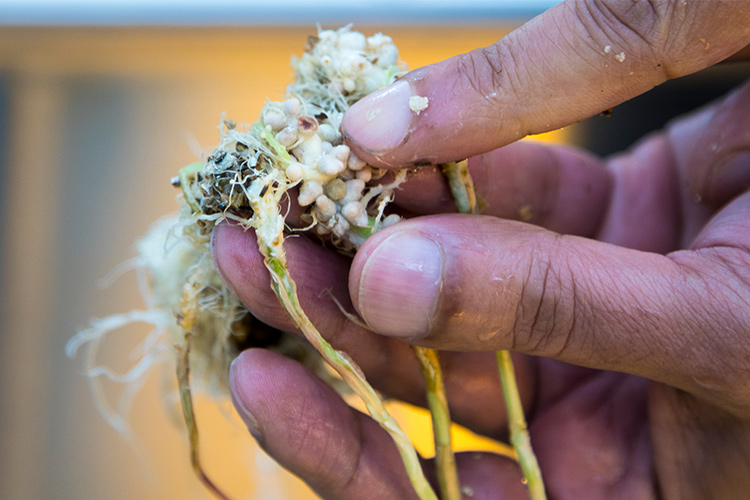 Inside the root nodules, rhizobia bacteria convert nitrogen gas into a form of nitrogen the plan can use to create proteins. (UWM Photo/Pete Amland)

The idea of transferring rhizobia’s nitrogen-fixing abilities to other crops is not new. Agronomists recognized the potential more than a century ago, and still, nobody has unlocked the mechanism behind it.

When the soybean genome was sequenced about a decade ago, scientists expected they would find the fixation mechanism linked to a gene that other plants don’t possess. But that’s not what researchers discovered. In fact, the genes that legumes use for their symbiotic relationship with rhizobia also are found in the genomes of other crops.

“So, the mechanism could be a matter of how the legumes regulate those genes,” Prasad says. “What are they doing with their genes that other plants do not?”

In 2012, the Bill and Melinda Gates Foundation championed the problem, allocating $10 million for research at several universities in the United Kingdom and the United States. Prasad initiated a collaboration with UW-Madison agronomist Jean-Michel Ané, who received part of that funding, to investigate rhizobia behavior in rice. Although Ané has since moved his focus to corn, Prasad continues investigations into rice, specifically with how the microbe and plant talk to each other.

Prasad created a biological model that allows him to probe deeper into the communication pathways that rhizobia might use in rice. With his model, he can manipulate changes in the genes of the bacteria and rice and compare the findings to gene behavior in soybeans.

Just as bacteria in the human gut support a healthy immune system, the microbial communities in soil help promote Earth’s nitrogen cycle, which boosts crop yields. But they are extremely complex systems.

“We only know about 1 percent of the bacteria in any system, not just in the soil microbiome,” Prasad says. 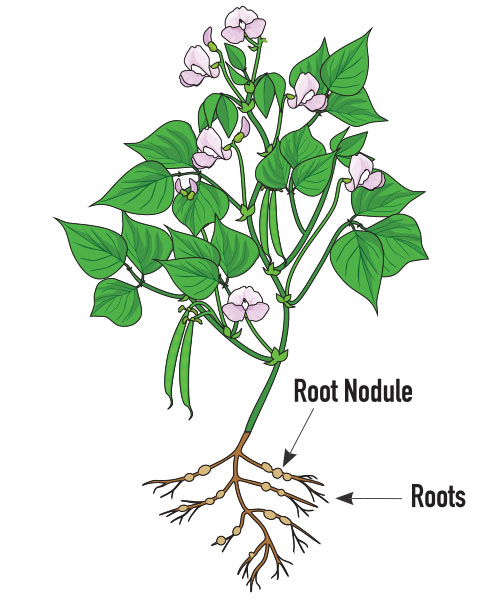 How legumes and rhizobia help each other

A symbiotic relationship exists between the legume and rhizobia bacteria in the soil, which results in natural fertilization. Rhizobia take nitrogen (N2) that penetrates the soil from the air and supply it to the plant. The bacteria do this by colonizing the plant’s roots and forming nodules, where they convert the N2 into a form of nitrogen the plant can use. In return, the plant makes food (carbohydrates) from photosynthesis and provides it to the bacteria.

One thing that scientists have known for some time: Legumes recognize the rhizobia as friends, and they both communicate as such. Bacteria from the soil invade the root hairs of legumes. As the microbe touches a root hair, the hair begins to curl, and the microbe enters its cells. From this brief interplay, the plant builds a nodule on the root to house the bacteria.

The atmosphere is loaded with a gaseous nitrogen, called N2, that also permeates the soil. Rhizobia draw N2 into the nodules, where it turns the gas into a form of nitrogen the plant can use to make proteins, which is the first step in boosting growth. One plant can produce hundreds of nodules. Inside each one, up to a billion bacteria generate an enzyme responsible for the conversion.

The missing piece, Prasad says, is how communication unfolds between plants and microbes: The plant would need a way of summoning bacteria from the soil and “telling” them to form nodules.

Scientists thought that communication mechanism would be imprinted on a dedicated nitrogen-fixation gene within legumes or rhizobia. Once that proved incorrect, they figured the mechanism must happen through an existing gene-enabled pathway, such as one used by a fungus called mycorrhiza.

The fungus has a symbiotic relationship with nearly every plant and uses a plant’s “fungal interaction” genes to infiltrate and help them expand their root networks by ramping up hormones.

Prasad inoculated rice with rhizobia and found that the bacteria can, indeed, get into the rice plant using the same pathway that mycorrhizae do. And once inside the rice plant, rhizobia enhanced hormone growth in the same way these bacteria do in legumes.

But some obstacles remained: The rhizobia microbes didn’t get inside the root cells in rice, as they do with legumes, and they didn’t stimulate the rice plant to make root nodules.

“If we can get them inside the cell in rice,” Prasad says, “that will be the breakthrough. But it’s tricky. We’re trying to accomplish something that evolution has not.”

His work toward that continues, encouraged by more clues from the rice-rhizobia interactions. When rhizobia use the mycorrhizae pathway, changes occur in the instructions delivered by the fungal interaction genes that are involved in messaging. These changes signal that activity is happening that wouldn’t without the bacteria’s presence.

Prasad wonders if this could reveal the communication process between legumes and microbes.

Prasad knows there are many approaches with potential to solve the nitrogen-fixing mystery. Other scientists are trying strategies like gene editing, which could bypass the need to figure out rhizobia’s secrets.

Still, he believes that understanding the actual biology is important because of what else it might tell you.

“There are many steps that need to happen before it can fix nitrogen,” Prasad says, “So, to find the answer, you follow where the basic science takes you.”