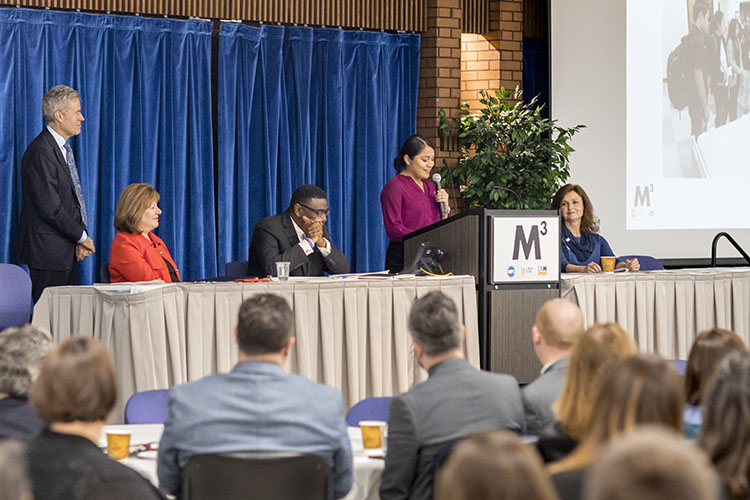 Pilar Olvera, a senior in sociology and urban studies at UWM, talks about the effect the M-cubed effort has had on her life. Looking on are UWM Chancellor Mark Mone (from left), MATC President Vicki Martin, MPS Superintendent Keith Posley and Phyllis King, associate vice chancellor of academic affairs at UWM. (UWM Photo/Elora Hennessey)

M³ celebrated its second anniversary with an event highlighting the impact the initiative has had so far.

The goal, UWM Chancellor Mark Mone said in his opening remarks Wednesday, is to bring together the area’s three major public education institutions “to transform lives and create opportunities for individuals.” Together the institutions serve more than 130,000 students.

Among the major areas of focus have been to increase high school graduation rates, increase the number of students going on to two- or four-year degrees, encourage parental involvement through Parent Institutes and help students develop skills that lead to family-supporting employment. These efforts can combine to overcome poverty, unemployment and other social issues, the speakers said.

Presentations focused on the progress the M³ (pronounced M-cubed) efforts have made.

Keith Posley, superintendent of Milwaukee Public Schools, noted that four-year high school graduation rates have improved from 58.2 percent when the M³ partnership started two years ago to 62.2 for the class of 2017.

“We have made progress, but we know this rate is ultimately not where we all want it to be,” Posley said. “As M-cubed partners, we have set a target of 72 percent by 2019-20.”

Vicki Martin, MATC president, noted the success of the MATC Promise program introduced in 2015, which offers free tuition to eligible students. That program has been extended to adult students interested in completing a degree. She said that MATC had already enrolled some parent-child teams, including a father and son who did the plumbing program together.

The Promise program helped boost enrollment of MPS students at MATC by 80 percent between fall 2015 and fall 2017.

M³ has also succeeded in efforts to let students and parents know what they need to do to prepare for higher education. With the help of workshops, the number of FAFSA (Free Application for Federal Student Aid) applications increased from 60.8 percent with the class of 2016 to 74.6 percent with the class of 2018. The target is 80 percent by 2019-20.

Mone said the pathways to education are vitally important and the M³ institutions are working hard to create those and to support students in not only accessing higher education but also completing their degrees.

Summer bridge programs in mathematics, career planning, coaching and dual-enrollment programs that allow high school students to earn college credit are all part of the effort, he and other speakers said.

Two UWM students talked about the impact M³ has already made on their lives. First-year student Mawah Kromah, who plans to major in education, talked about the support she received at her MPS high school — James Madison Academic Campus — and the summer bridge program that helped her graduate from high school and enter college.

Pilar Olvera, a senior in sociology and urban studies at UWM, praised the support she had received at UWM that has contributed to her academic success and set her on a path to graduation. “UWM helped me every step of the way,” she said.

Mone closed his presentation talking about insights he’d gained from reading biographies of America’s founding fathers, who saw the value of offering public education to all as a way of establishing an informed citizenry. That is a key reason the work must continue, he said.

“The only way we will continue to achieve a true democracy is through continued work in public education,” Mone said. “I’m proud of the work we’ve achieved, but we have much more work in front of us.”