Anita Alkhas swears that the students who enter the UWM International Dessert Competition organized by the language programs become more creative every year.

“A lot of students work in the service industry through college, so everyone seems to know a lot more about food these days,” Alkhas said.

Alkhas, associate professor in the department of French, Italian and Comparative Literature at UWM, had an idea to create an annual competition to promote the world languages and cultures programs six years ago. After conferring with her colleagues, the dessert competition was born.

“Desserts have broader appeal,” Alkhas said, “It’s something everyone can get behind. It’s an easy sell.” 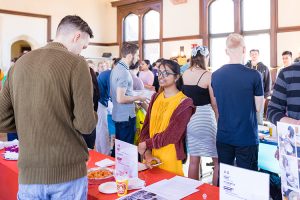 More than a hundred students came to this year’s UWM International Dessert Competition to sample the sweet delights concocted by the contestants. Eighteen individuals and 20 group contestants shared their home-baked goods with the judges and audiences.

Five judges presided over the competition: Peter Carini, owner of the Italian restaurant Carini’s La Conca D’Oro; Matt Post, the operations manager of Troubadour Bakery; Tim Sampson, lead party chef for Shully’s Cuisine and Events; Karen Gill, founder of meal delivery service Focused Fork; and Katrina Kozar, who works at UWM Libraries as an administrative assistant as well as running her own catering business and blog. Kozar was a contestant on Season 6 of MasterChef. After being on MasterChef, host Gordon Ramsay paid for Kozar to take cooking classes in France.

“You should push your boundaries in the culinary world. You have to try different cultures and experience them. Food is one great way to do that,” Kozar said.

Many student contestants created dishes culturally specific to their ancestry, while some used recipes learned about in their international cuisine classes. The desserts submitted spanned the globe, from Germany to Japan to Puerto Rico to Palestine.

Hien Nguyen created a dessert that combined her two cultural heritages: “I was born in Germany, but my parents are from Vietnam,” she said.

Her friend Nicole Boehler helped her bring her idea to life. Together they presented a dessert they called Violet Fusion, a cake that blended ingredients and flavors from both Nguyen’s cultural heritages.

“I don’t think there is ever a cake with so many layers in Vietnamese food, so the first layer is with a Vietnamese ingredient which is called ube, a purple sweet potato,” Nguyen said, “and the other layers are made with a German batter which has Fanta in it.”