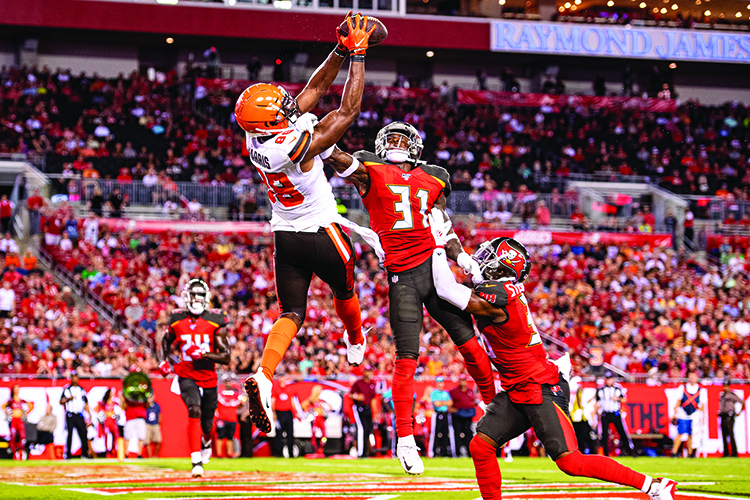 Cleveland Browns tight end Demetrius Harris leaps for a pass during a preseason game against the Tampa Bay Buccaneers this year. (Photos courtesy of the Cleveland Browns)

It seemed unlikely that another UWM athlete would play in the National Football League after Houston Oilers all-pro safety Mike Reinfeldt retired from an eight-year career in 1983. Milwaukee, after all, had dropped its varsity football program in 1974.

More than three decades later, however, 28-year-old Demetrius Harris embarked on his sixth season as an NFL tight end, and he didn’t play a single down of NCAA football.

Harris, in his first year with the Cleveland Browns after spending five with the Kansas City Chiefs, played basketball for two seasons at Milwaukee. A rugged post player and a senior starter in 2012-13, he averaged 5.1 points along with 4.0 rebounds over 51 career games.

His athletic career might have ended there, if not for this: He was 6-foot-7, 237 pounds, ran 40 yards in 4.52 seconds and had a vertical jump of 36 1/2 inches. Those numbers get the attention of NFL scouts, no matter if an athlete’s background is in football, basketball or tiddlywinks.

Ryan Kessenich, a 2006 UWM graduate and a former Chiefs area scout who’s now with the San Francisco 49ers, worked out Harris in spring 2013 at the Klotsche Center and Engelmann Stadium. Harris’ speed and athleticism were obvious.

“From playing defense in basketball, where you’re low, it helped me getting in and out of breaks,” Harris said. “A lot of people say I run my routes like a basketball player. I don’t know what that means. I guess it’s so rare that people on defense rarely see it.”

The Chiefs signed him as an undrafted free agent, and he made the team, contributing mainly on special teams. As his blocking and route-running got better, he saw increased playing time on offense as all-pro tight end Travis Kelce’s backup.

Despite his blocking-heavy role in K.C., Harris entered the 2019 season with career totals of 57 catches for 605 yards and six touchdowns. The versatile and still-improving athlete became a free agent in 2019, and he signed with the Browns.

“It’s a great opportunity this year to help renew the Browns and make it to the playoffs and do good things,” he said of the franchise, which hasn’t won a playoff game since 1994.

Football wasn’t completely foreign to Harris, who excelled in the sport in high school. He caught nine TD passes as a senior at Jacksonville (Arkansas) High School and signed to play football at Arkansas State, but he didn’t qualify academically. After two years of playing community college basketball at Mineral Area College in Missouri, he eschewed Arkansas State’s offer to play both sports and accepted a basketball scholarship from UWM. He earned a reputation for his tough on-court presence.

Upon joining the Chiefs, Harris set about rediscovering his football form and improved incrementally but steadily. After catching 10 passes for 94 yards and one touchdown in his first two years, he caught 47 for 511 and five TDs in his last three.

“Just working on my craft more,” is how Harris explains his progress. “When I first got in the league, I was raw. I was working off my athleticism and not doing the little things. As I grew and got wiser in the league, I noticed what other people do.”

Other people noticed him, too, especially the Browns. They signed him to back up starter David Njoku, but Harris thinks he’ll get more playing time than in Kansas City, where Kelce made the Pro Bowl the last four seasons. “I definitely have a better opportunity here, but only time will tell,” Harris says. “I just compete every day and improve and show the coaches I can do whatever they need me to do.”

And yes, he still roots for the Panthers basketball program from afar. “I watch the games on ESPN+,” Harris says. “I try to catch all of them. I’m still supporting them.”