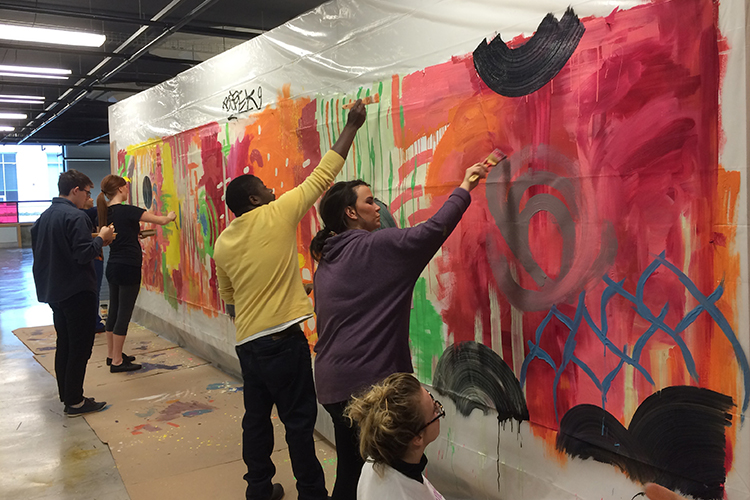 Raoul Deal's arts and community class studied issues of gentrification and worked with high school students to create murals to be used in the production. (UWM Photo/TroyeFox) 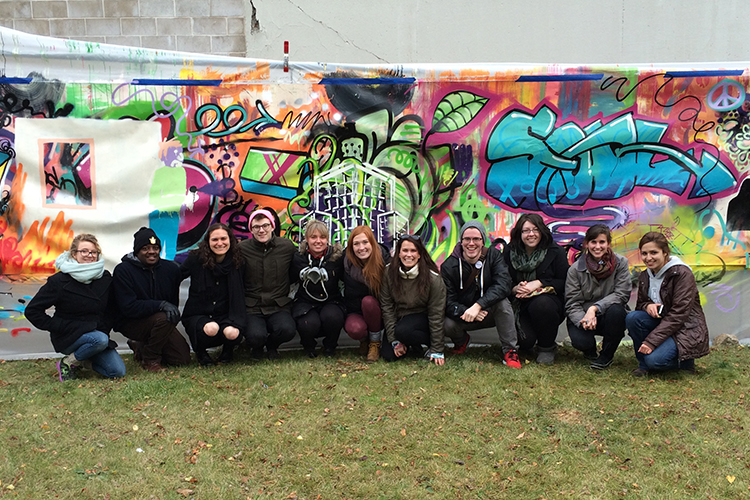 Students at True Skool worked with UWM students from Raoul Deal's class to create this mural for the production. (UWM Photo/Troye Fox) 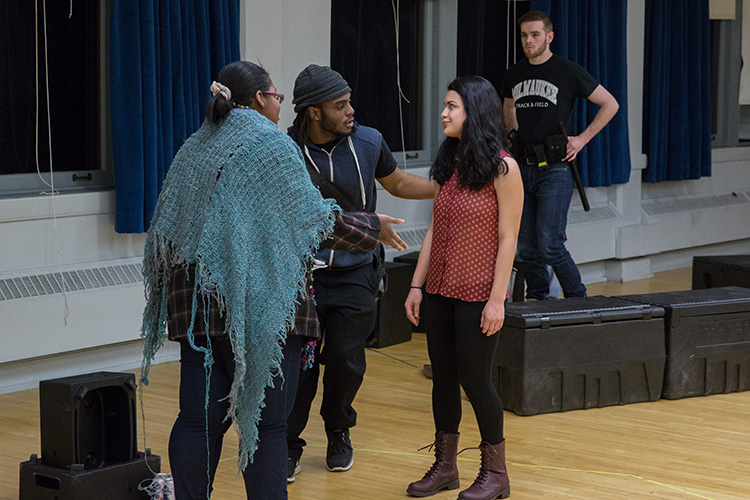 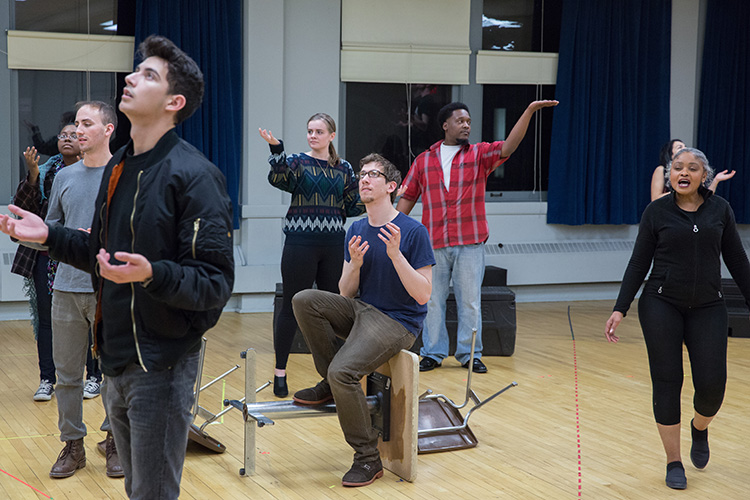 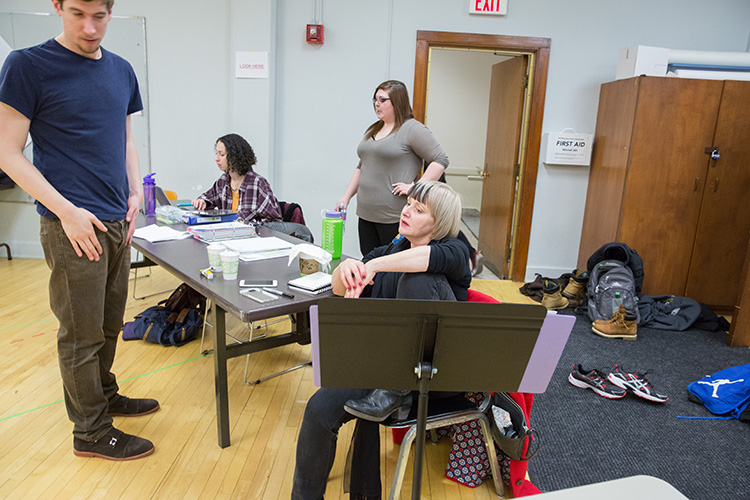 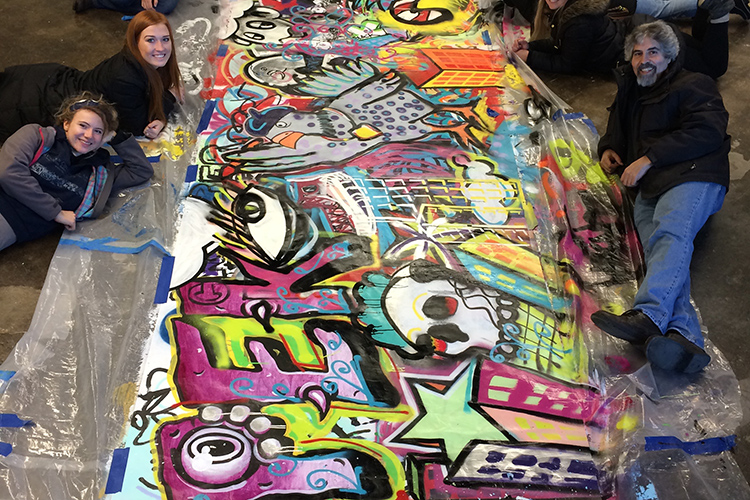 Raoul Deal (at right) with a mural created for "Corktown." (UWM Photo/Troye Fox)

In preparing for “Corktown,” a play about gentrification set in Detroit’s oldest surviving neighborhood, the director, set designers and a group of artists visited an old coke fuel plant near Milwaukee’s inner harbor.

On their most recent visit, the group learned the building was going to be razed and replaced with condos, according to Rebecca Holderness, director of “Corktown” and associate professor of acting in the UW-Milwaukee Peck School of the Arts.

That change reflected the ideas explored in the play, March 2-6 at the UWM Mainstage Theatre, as well as influencing the aesthetic for the production’s set and set dressings. A collaboration of graffiti murals by artist James Tomasello, TRUE Skool art director, and his students, along with UWM community art students of Senior Lecturer Raoul Deal, will be displayed in the theater to transport the audience to “Corktown.”

Written by Jeff Augustin, “Corktown” explores the impact of gentrification in a neighborhood that is half as old as the city itself. Parallels with Milwaukee are obvious. 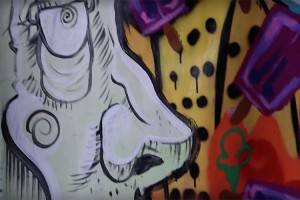 Play Video
UWM art students collaborate in ‘Corktown’ production
“The subject is the push and pull within a community – the downturns and upturns, the transformation of different neighborhoods,” Holderness said.

UWM’s production goes beyond the play to encourage the Milwaukee community to explore the impact of change – positive and negative.

“Corktown” is a good fit for UWM actors because it focuses on a diverse group of young people coming of age in the neighborhood, Holderness said.

One of the young characters is a young graffiti artist who is featured in a new gallery taking advantage of inexpensive gallery space in the downtrodden neighborhood, sparking more artists to move into the neighborhood and attracting the interest of developers.

“As the artists move in, the neighborhood becomes more attractive to developers, but their interests are not always aligned with the concerns of neighbors,” Deal said.

The play doesn’t take a position on gentrification. “It encourages the viewer to think about the original history and beauty of a particular community and why it’s important to preserve that,” Holderness said.

Using art as a vehicle to foster conversations about – and find sustainable solutions to social challenges – is part of Peck School of the Arts’ core mission, according to Holderness.

“I think that for us to reach out to TRUE Skool and collaborate with them through Raoul’s class, then work with a new playwright and even commission some new art from a Milwaukee-based artist, all affirms this idea that we are part of Milwaukee. It also affirms that we are a place where a wide diversity of students and artists can find education and expression. It reflects the city and invites the city in,” Holderness said

The exploration of this theme will continue in UWM Theatre’s next Mainstage Theatre production, “Hot L Baltimore.” Opening April 27 and directed by Bill Watson, professor of theater, “Hot L Baltimore” explores the impact of gentrification on a collection of down-and-out misfits in a rundown hotel in Baltimore.

“Corktown,” a new work by up-and-coming playwright Jeff Augustin, premieres in Milwaukee March 2 and runs through March 6 on the UWM Mainstage Theatre, 2400 Kenwood Blvd. The production is at 7:30 p.m. Wednesday through Saturday, and at 2 p.m. Sunday.