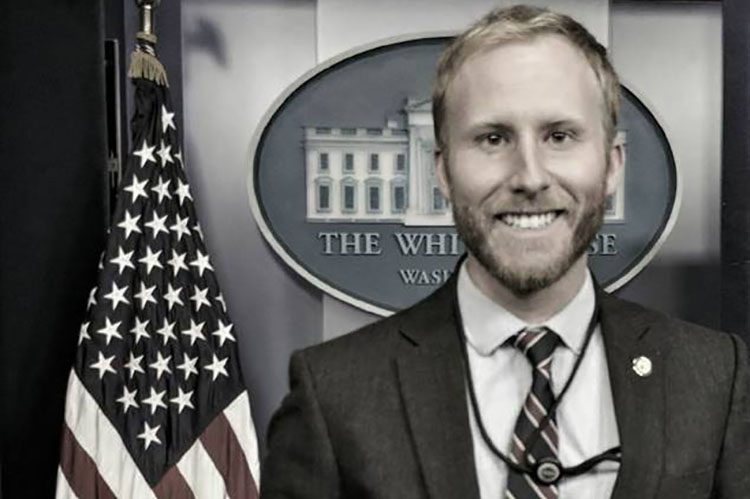 Craig Wiroll, a journalism graduate from UWM, says his experience as an intern at the White House has helped him focus on what he wants to do in life -- work in community service at the local level. (Photo courtesy of Craig Wiroll)

Craig Wiroll became interested in community service during his days at the University of Wisconsin-Milwaukee, but he never imagined where that interest could take him.

“Never in my wildest dreams did I think I’d ever be working in the White House,” said Wiroll, who just completed a semester-long internship at the Domestic Policy Council, which coordinates the president’s domestic initiatives.

Wiroll, a first-generation student from Sheboygan who earned his bachelor’s degree in journalism from UWM, worked for the White House Rural Council, part of the Domestic Policy Council.

The Rural Council, established in 2011, handles issues such as working for equal opportunities for youth in rural areas and tribal communities, fighting opioid addiction and making federal grant programs equitable for rural communities.

His path to the White House started with service learning and community engagement opportunities while he was at UWM, Wiroll said. Among the efforts he became involved in were serving as a Big Brother for a student at Hartford University School and volunteering with the Hunger Task Force, Urban Ecology Center, and Keep Greater Milwaukee Beautiful. Those experiences fueled his interest in public service.

After graduation in 2010, he moved to Oregon and joined the AmeriCorps VISTA and AmeriCorps NCCC programs, doing everything from teaching in low-income classrooms to repairing waterfalls in Silver Falls State Park in Oregon and building houses for migrant workers in southern California.

With his passion for working for nonprofits and community agencies, he decided to return to school. He was finishing his master’s degree in public administration at the University of Oregon and had received a local government management fellowship when the opportunity to apply for a White House internship came up.

He applied in February 2016, graduated in May and finally got the call for an interview in June. The whole process involved hours and hours of paperwork and careful background checks – “I think they talked to everybody I ever knew or worked with,” he said with a laugh, adding, “I was confident about my skills, and I guess I rocked the interview.”

He was raised by a single mother, and he was influenced by his mother, grandmother and other strong women in his life, he said. So for their sakes as well as his own, he was thrilled to be one of the 5 percent of applicants to be selected for the internship.

“It was the proudest moment of my entire life.”

His internship started Sept. 1 and finished Dec. 16. In his job, he worked with the more than a dozen agencies that partner with the Domestic Policy Council, including the Environmental Protection Agency, Housing and Urban Development, the Corporation for National and Community Service (which houses his former employer, AmeriCorps) and the departments of Agriculture, Education, and Health and Human Services.

He learned about issues including opioid use in rural areas and the up to 80 percent unemployment and high suicide rates on some Indian reservations.

“It’s pressure and responsibility and a lot of hard work,” Wiroll said.

President Barack Obama’s own work in community organization was an inspiration to him, Wiroll said, and his values align closely with the president he served. However, he believes that the good work being done by the Domestic Policy Council and Rural Council will continue under the new administration.

“The career staff has been working on these problems for decades,” Wiroll said. “The election was unpredictable, but I believe they will make a smooth transition.”

During his internship, he got to experience some of those “whoa-I’m-in-the-White-House” moments: playing basketball on the South Lawn, meeting the president, getting a hug from the first lady, meeting Vice President Joe Biden, seeing President Obama and Leonardo DiCaprio discussing climate change just a few feet from him at South by South Lawn, and even watching the first dog, Bo, walk by his office. Being able to give his mom a tour of the White House on her first visit to Washington, D.C., was also a special moment, he says.

“To be in that House is pretty amazing.”

Now that he’s finished his internship, Wiroll is taking some time off to be an uncle, hanging out with his sister and her young family in Madison. Then, he’ll be looking for “my next big adventure.”

His time at the White House helped him discover that he’d like to focus on the local level.

“I’ve been looking at the big picture — from the helicopter level – but now I know I’m someone who wants to be on the ground in the community. That’s something I discovered about myself during this internship.”