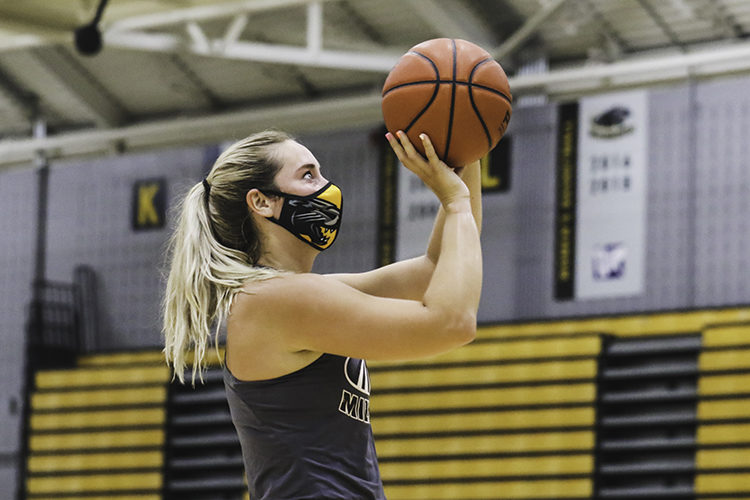 UWM senior Brandi Bisping, a guard on the women’s basketball team, puts up a shot during practice. Athletes must pass a screening and wear a mask during practices to limit the spread of COVID-19. (UWM Photo/Ashley Steltenpohl)

Even though the Horizon League, which includes UWM and other universities in the Great Lakes region, has postponed fall sports to spring, the traditionally winter and spring sports are tentatively planning their schedules.

“It will look different than a normal year, but we don’t really know what that might look like for us yet,” said Cody Bohl, associate director of athletic communications.

The Horizon League portion of the basketball schedule was released Nov. 4. The women begin play with a trip to Green Bay on Dec. 12, while the men kick off the season with the same trip Dec. 19. UWM is working on nonconference schedule but that has not been finalized, Bohl said.

Separately, UWM announced that for the safety of athletes, fans and staff, no fans would be allowed at home events in any sport in November and December. The policy will be revisited as the new year approaches.

Student athletes across the board have begun practices. To be cleared for practice, Bohl said, students must check a few boxes first: Athletes report to the trainers’ room before practice to answer a series of questions, such as if they have any symptoms of COVID-19 and if they have come in contact with anyone who has tested positive. Then they have their temperatures taken. If they don’t have a fever, they receive a wristband to show they are cleared for practice.

Will Mortimer, an athlete on the track and field team, said that this is an easy routine for athletes to slip into.

“Most athletes go to the trainers’ room before practice anyway, so it’s just an extra step,” he said. “It’s a way for coaches and other people to know you’ve been screened by the athletic trainers.”

Track and field practices, Mortimer said, are every day. If the weather is nice, the team heads outside. “Practices have not changed too much,” he said, “but athletes and coaches must wear masks during practice, and groups have been limited to keep athletes socially distanced.”

While there are some advantages to practicing in smaller groups, Mortimer notes the disadvantages too.

“Practicing for any sport that requires running is extremely difficult to do with a mask on,” he said. “Last year we had a lot more people practicing together, and it was easier to practice in closer areas without the COVID guidelines. I like the smaller groups allowing the coach to pay closer attention, but everything else makes the process much more difficult.”

UWM’s team has roughly 100 members between men’s and women’s track and field. Normally, UWM’s the season runs January through the end of the spring semester in May. Student athletes begin training as a team at the beginning of fall semester or middle of August, according to Panther Athletics COVID-19 updates page.

The first competition dates for volleyball, cross country and soccer are scheduled to take place Jan. 22, Jan. 23 and Feb. 3 respectively, Bohl said. However, he notes that this could change in the coming months.

“We’ll just have to wait and see,” Bohl said.