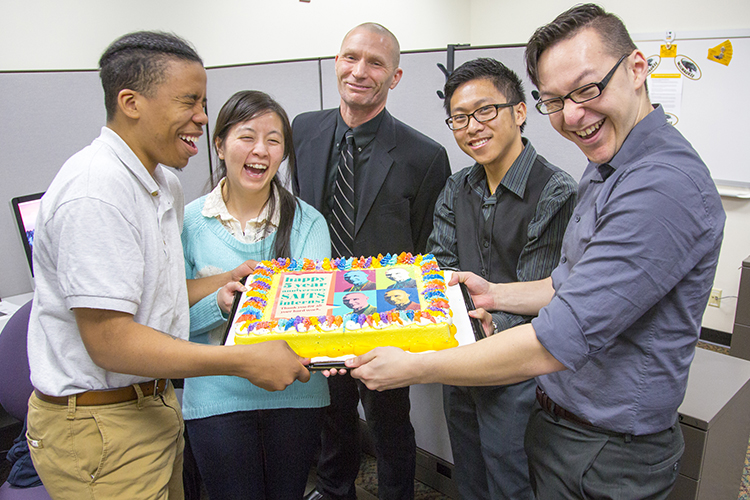 Interns have a laugh over the Andy-Warhol-style cake featuring the face of J. Dietenberger (center), who oversees the Student Affairs IT Services internship program, celebrating its fifth year. From left are Leon Harmon, IaOng Moua, Kevin Yang and Ben Bridwell. (UWM Photo/Pete Amland)

Student Affairs IT Services has been developing technology solutions at UWM for years. One of its most powerful solutions, though, has come not in information technology systems themselves, but rather in the students behind them.

In May 2013, SAITS launched an internship program that now includes student interns and student workers from 17 tracks in STEM, business, innovation and design majors. Together, students make contributions to an assortment of IT projects on UWM’s campus, including help desk support, coding, graphic design and building and repairing computers.

The program has been developed and designed over the years to refine, develop and supplement students’ classroom knowledge. The goal: to develop job skills that match industry’s workforce needs. As a result, SAITS alumni enter the workforce with the equivalent of one to five years of real-world experience.

The program has both an international and a domestic reach and includes students at the undergraduate, graduate and doctoral levels.

J. Dietenberger, a key leader in the program’s success, brought 25 years of IT experience with Fortune Global 500 companies to his work at UWM. Dietenberger oversees and mentors a majority of the students and their work at SAITS.

Kevin Yang, a School of Information Studies student, joined the program on a whim. There was an event for first-generation students, and “It had free coffee, so I went in,” Yang said. From there, Yang met Dietenberger and started an internship with SAITS.

“I had zero experience at all,” Yang said. “For me, it’s definitely a real first steppingstone to the real world.”

The proof of the program’s success lies in the numbers, too. SAITS program alumni post a nearly 100 percent hired rate within six months of graduation. Additionally, according to anonymous feedback, interns report a 98 percent satisfaction rate with their experience.

The campuswide SharePoint project launched in 2016, for example, employed the work of SAITS interns. Students in the program also take a leading role in events such as DiversITy — SAITS’ annual interdisciplinary open house. The meet-and-greet celebrates diversity and inclusion in STEM.

“That was an incredible learning opportunity for me,” said Ben Bridwell, whose major emphasizes IT project management. “For as much as I was dragged through the mud getting to the end of that, it didn’t turn me off to project management. In fact, it made me want to do it more to get better.”

The mud-dragging led to positive outcomes not just for Bridwell, but the event itself. Attendance rose from 120 to roughly 200. It also garnered the attention of academic leaders across campus: Four deans and five associate deans from various departments attended the 2018 event – up from two deans one year prior.

Bridwell’s role with DiversITy highlights the program’s motivating mission of student success – bringing together students who are at very different stages of experience and education to accomplish growth.

Academic-to-career transition is a big focus in that mission. Soft skills development, specifically working as a team, is at the forefront of the SAITS program.

“Even though in the future work world you’ll be working with a team, you don’t really do that (in the classroom),” said IaOng Moua, a senior in the SAITS program. “Here, you get to develop those skills.”

Students such as Moua find a valuable lesson in turning classroom knowledge into workplace productivity. For others, professional networking is at the forefront of the potential benefits SAITS can offer students.

In addition to going on tech firm tours, students at SAITS have the opportunity to meet influential public figures, including Rep. Gwen Moore of Wisconsin and Tim Higgins, a former member of the UW System’s board of regents.

“I think the ability to connect with many different important individuals in our society is what I took away from this,” said Leon Harmon, a senior majoring in information science and technology. “This is the best job I’ve ever had.”

To date, roughly 315 students have completed SAITS internships. Logging approximately 15,000 project hours thus far, SAITS interns have developed real-word applications and IT systems for high-level campus projects at UWM. However, the greatest accomplishment of the program lies beyond UWM’s campus, when students launch their careers.

“Seeing students bridge into industry in such a way where they launch (their careers) with incredible pride, that industry is really looking at our students with interest,” Dietenberger said, “that’s the accomplishment.”