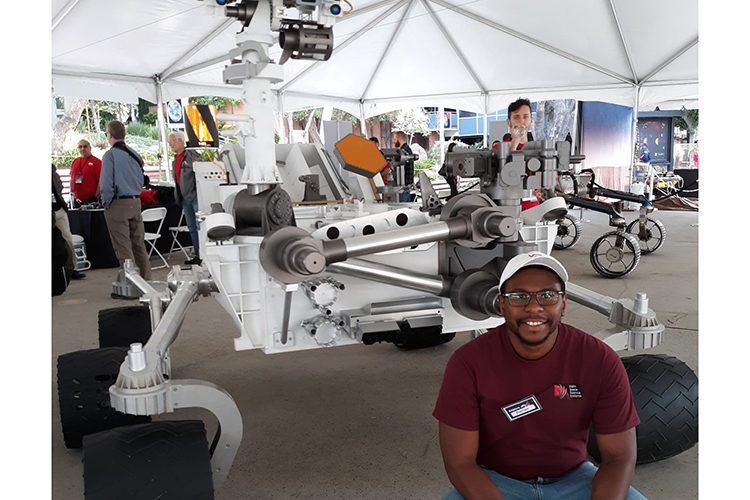 Darian Dixon poses in front of a model of the Curiosity rover, which landed on Mars in 2012. (Photo courtesy of Darian Dixon)

Darian Dixon spent his childhood nights staring at the glowing stars and planets adorning the walls and ceiling of his small bedroom. But weighed down by his circumstances on Earth, young Darian wondered if he’d ever get much closer to space than that.

“I was a poor Black boy with an uncertain future in a single-parent household, a prime recipe for a ‘statistic,’” Dixon said. Once, when mother Gloria was between jobs, she called him into her room and sat him down. “She holds up two pennies and tells me, ‘Sweetheart, this is all we have now.’ But she also told me this wouldn’t be for long. And come hell or high water, we would find a way.”

Gloria was right. And today, Dixon’s path has taken him all the way to the surface of Mars.

The 2015 UWM graduate, who will give the commencement address at UWM’s 2021 spring graduation, plays a key role on NASA’s $3 billion Perseverance Rover, which landed on Mars in February. Dixon is Perseverance’s Mastcam-Z data management lead. His duties involve guiding the two Mastcam-Z cameras, which are part of the rover’s array of nearly two dozen cameras. They’re capturing panoramic stills to help scientists learn more about the planet’s atmosphere, landscape and soils. And he teamed with colleagues to quickly ensure Mastcam-Z footage of the inaugural Ingenuity helicopter flight was received back on Earth as soon as possible.

Moreover, the Perseverance mission isn’t Dixon’s first Martian experience. He’s also been involved with the previous rover mission, Curiosity. For both missions, Dixon has handled the data storage, coding and programming needed to take thousands of images and transmit them 150 million miles back to Earth. “There are a lot of ones and zeroes that speak in a language that only the rover understands,” Dixon said. 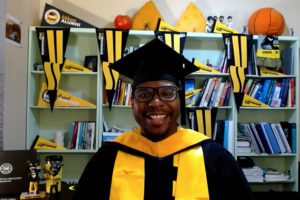 Using their command of coding, Dixon and his team tell the cameras how to point at, focus on and acquire images. Without them, humans would never see what the rovers see, including one of the most famous images taken by Curiosity in late 2019 and known as the “gigapixel.” At 1.8 billion pixels, it’s the highest-resolution picture ever taken on any exoplanetary body. It took four days for the team to write the commands, verify them and instruct the camera to create the image. “It turned out to be spectacular,” said Dixon, who lives with his wife in southern California. “We pulled it off without a hitch.”

Dixon’s interplanetary journey began in earnest at UWM, and his connection to UWM started long before began he earned his bachelor’s degree in geosciences there. He grew up near the campus and his mother attended UWM. In fact, some of his earliest memories are of being with Gloria in the UWM Student Union.

Along the way, Gloria inspired and encouraged him to dream and believe despite their many challenges. She’s now community giving manager at the Washington state corporate offices of BECU, the country’s largest nonfederal credit union. “Watching her climb to where she is has been an integral part of my journey and my motivation,” Darian Dixon said.

With support from Gloria and his “amazing stepfather,” Troy Hubbard, Dixon enrolled at Dominican University in Chicago, then transferred to UWM. Although he wanted to find a field that would lead to a space-related career, he initially majored in political science.

“I was terrified of taking classes that I thought would be too difficult or a career path that would be too hard,” Dixon said. But eventually, he found the courage to pursue his first love, as well as support at UWM to do just that. “A week after I decided I wanted to go into geology and into the space industry, I was in Professor’s Lindsay McHenry’s office talking to her about my interest in Mars and planetary geology.”

He worked alongside faculty members on undergraduate research projects, graduated from UWM and later earned a master’s degree in planetary geology at Western Washington University. Next stop: Mars.

Working with the Mars rovers means adjusting his sleeping and waking cycles to Mars time, which is 40 minutes a day longer than Earth time. The effects, he said, are like a permanent case of jet lag, but the rewards are well worth it. When asked about the value of space exploration, he can list all of the products and knowledge the work has produced. But for him, it comes down to the sense of possibility that began when a little boy stared at those sparkling stars on his bedroom walls.

“We’re exploring the final frontier. It’s something that fills our hearts with awe and wonder,” Dixon said. “I don’t think you can put a price on that. You just get to look up and be happy that you are part of something that is much bigger than humanity.”

That’s why he’s passionate about inspiring other students to follow their dreams, too, especially students of color. He encourages them to pursue careers in the STEM-related fields of science, technology, engineering and math. He’s chatted with UWM students during Geek Week and will share his story with new UWM graduates at the 2021 Spring Commencement.

He knows that they, like him, can start with two cents, reach for the stars and capture a planet.