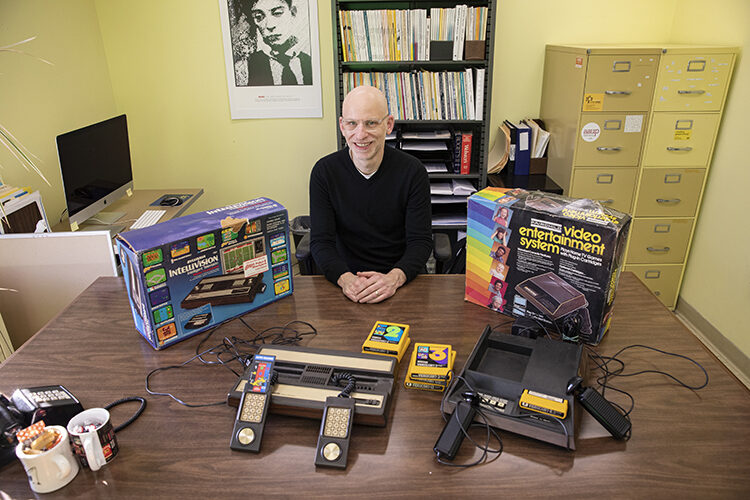 How many of you have heard of the video game Pong?

Its concept was about as simple as its name. It took two players, each one controlling a paddle, hitting an electronic ball back and forth across a screen. Pong was found in arcades or — if you had one at home — the paddles were connected to a video game console wired to your television.

Think of it like a pixelated version of pingpong.

The simplistic game might pale in comparison to the flashier, more complex titles popular today, like Minecraft, Call of Duty or the Madden football franchise. But back when it was released in 1972, Pong was a smash. In fact, it became the first video game on the market to become a mass hit.

Our guest on this episode of Curious Campus is Michael Newman, a professor of English who also teaches in the Media, Cinema and Digital Studies program in UWM’s College of Letters & Science. Newman is the author of the 2017 book “Atari Age: The Emergence of Video Games in America.”

“Atari Age” takes a detailed swing at Pong, making this a good time to revisit the early days of video games, 50 years after they burst onto the scene.  Here, Newman talks about Pong’s popularity after its release in 1972, which was also when the first home video game console — the Magnavox Odyssey — was released. Listen to the full show at WUWM.com or on your favorite podcast app.

Pong wasn’t the first game video game on the market, but it did become the first big hit after its release in 1972. Why was it so popular?

Part of it was this simplicity, the ease of play and the fact that it didn’t require a lot of skill to be built up in the player. It was obvious what to do. It was fun, it was familiar, and people wanted to keep playing it.

Nolan Bushnell, an entrepreneur who started Atari, said that a good video game would reward the first quarter and the 100th like it was something fun to play each time. And then you could get better at it. So I think a lot of games like that, they appeal to you immediately. But then you also want to keep getting better at them.

What impact did Pong have on the growth of the video game industry?

It had a pretty significant impact from 1972 when it debuts until around 1977, when the Atari console came out that took cartridges. Initially it was called the Atari VCS for “video computer system,” and then it was renamed Atari 2600.

For those first few years, Pong and many different versions of Palm would have been the most common forms of video games that people would have played. Pong could be adopted into hockey, or similar games, using the same chip in many versions.

It was a common form of video game in the mid-70s, and I think it really established an identity for this new medium as something fun you can do with your TV set or as an alternative to other kinds of coin-operated games like pinball or like the electromechanical games that you would find in arcades like rifle shooting games. So, people became familiar with video games. They were often called “TV games.”

What is something you learned in doing the research for “Atari Age” that might surprise people?

I knew there were panics and a lot of fears about how young people were affected by the games. People were worried about kids not doing well in school, not getting enough sleep or harming their brains or eyes. So, I knew that was a fear — that’s typical when knew technologies come along and seem so seductive, especially to young people.

I don’t know if I realized there was a flip side to that of being hopeful and optimistic of how young people were going to use these technologies to become more familiar with computers or the high tech tools of the information age. So, there was some negative reaction, but there was some positive reaction that this was the new world that was going to open up to young people and it was exciting.