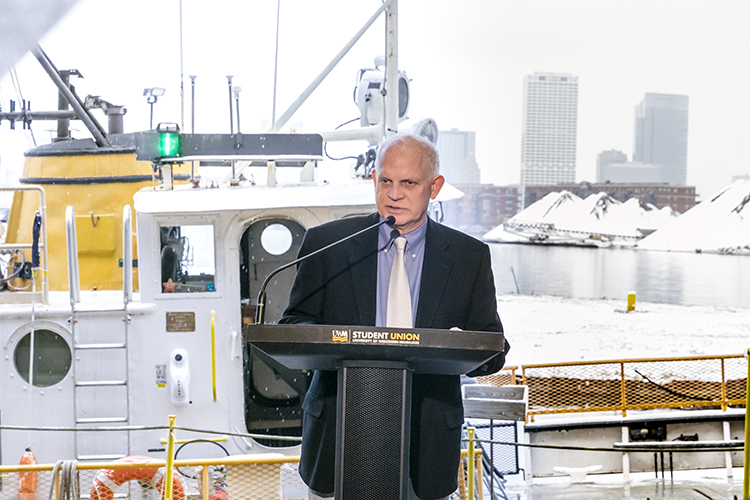 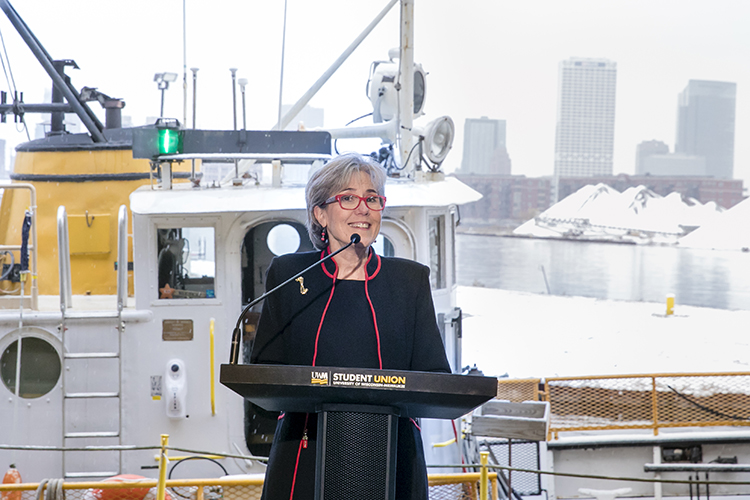 Ellen Gilligan, president and CEO of the Greater Milwaukee Foundation, talks about the $10 million donation, which was made by an anonymous donor through the foundation. (UWM Photo/Elora Hennessey) 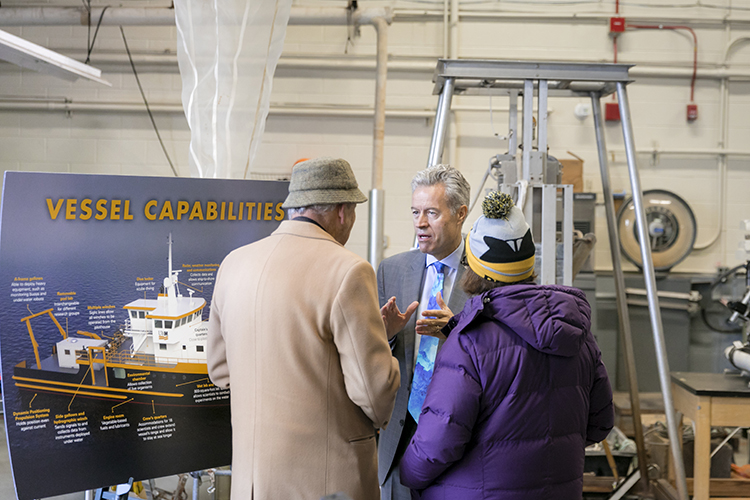 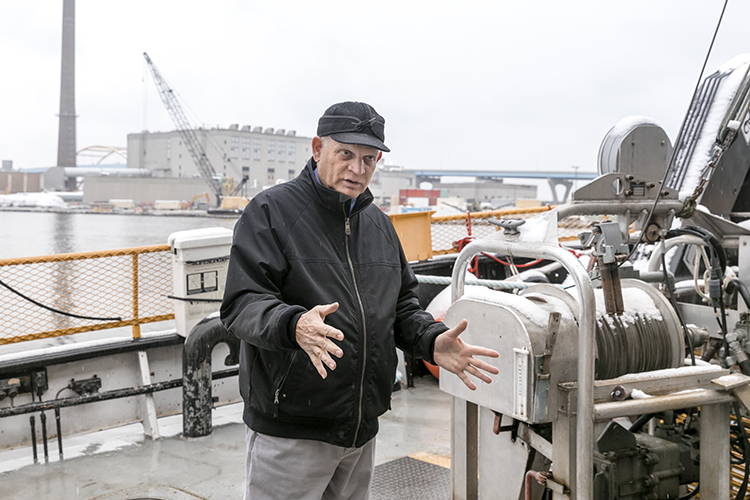 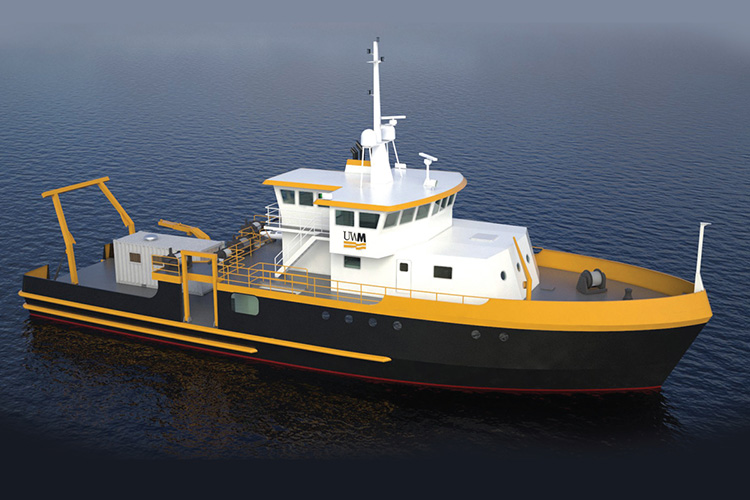 The 120-foot Maggi Sue will be the most advanced research vessel on the Great Lakes and the first designed specifically for conducting sophisticated research on these bodies of water. (Artist’s rendering) 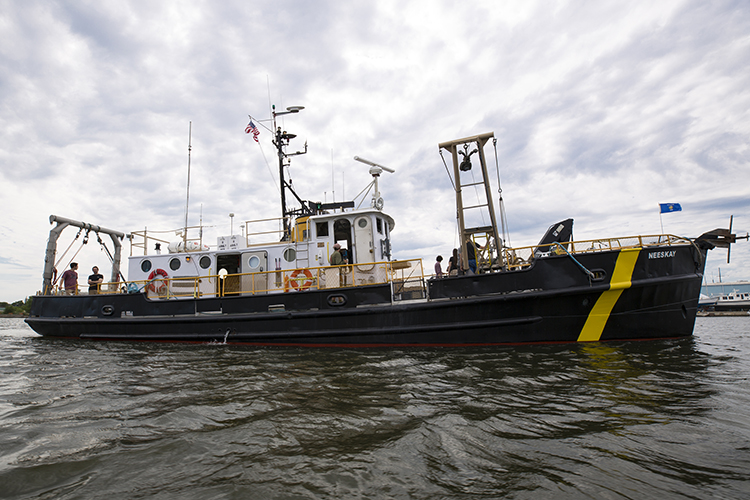 An anonymous donor of the Greater Milwaukee Foundation has committed $10 million toward a new research vessel for the UWM School of Freshwater Sciences.

In recognition of the gift, which equals the largest ever received by UWM, the vessel will be named the Maggi Sue. It will replace the current vessel, the Neeskay, a converted Army T-boat that is more than 65 years old.

More than 40 million people rely on the Great Lakes for clean drinking water, and the lakes sustain 1.5 million jobs and generate over $62 billion in annual wages. But they are ecologically fragile and monitoring their condition requires physical data collection.

“On behalf of UWM and our research partners, I extend my deepest thanks for this incredible act of generosity and for the Greater Milwaukee Foundation’s role in making it happen,” Mone said.

The gift amount covers half of the $20 million cost of the new vessel, which includes $15 million for construction and $5 million to sustain its operation. Mone said he hopes the gift will motivate other donors to contribute. Once fundraising is complete, it will take another 12 to 18 months for the actual construction of the vessel.

Despite its age, the 71-foot Neeskay is the only research vessel that sails year-round on the Great Lakes, logging more winter cruise time than the vessel operated by the U.S. Environmental Protection Agency. It has taken a battering over the years and is no longer subjected to breaking ice in the harbor.

“To call them ‘lakes’ is a misnomer,” said Val Klump, dean of the School of Freshwater Sciences. “These are inland seas where we can encounter 15- to 20-foot swells. The Maggi Sue will be the first multidisciplinary vessel built from the keel up to conduct the kind of research that we do.”

Measuring 120 feet in length, the new vessel also will be the first dynamically positioned boat on the Great Lakes, a feature that allows the vessel to stay in one place despite the current, wind and waves. Other technology includes a complement of sensors that collect real-time data, interchangeable lab “pods” that can be switched out depending on the scientists’ needs, and the space to give whole classes of students the opportunity to learn together at sea.

Unlike the Neeskay, the Maggi Sue will have sleeping accommodations for up to 18 people, allowing scientists and crew to remain on the water for longer periods of time to gather continuous data without needing to return to shore.

“This gift has such catalytic power, not only for helping drive the research enterprise at UWM, but in further signaling Milwaukee is a city capable of leveraging its unique resources for economic, educational and ecological benefits,” said Ellen Gilligan, president and CEO of the Greater Milwaukee Foundation. “I applaud our anonymous donor’s remarkable commitment to freshwater science in giving UWM the leading-edge tools needed to better understand and protect our Great Lakes.”

Research across the Great Lakes

What kind of research does UWM conduct? The school’s faculty research isn’t limited to near shore or near Milwaukee.

One example has the vessel regularly taking scientists to Green Bay.

For years, UWM scientists have been studying the problem of hypoxia – a lack of oxygen in the water that kills fish and other organisms. The work involves taking sediment from the bottom of the bay and investigating its role, in addition to phosphorus runoff from farmland, in using up the oxygen. Once samples are removed from the lake, they are subdivided and tested with various instruments. It’s important to keep the samples at a constant 40 degrees, the temperature of Lake Michigan’s bottom.

So scientists use a carry-on incubator that is put on the back deck because there’s isn’t enough room for it in the Neeskay’s wet lab. The new vessel, Klump said, will have a walk-in environmental chamber that can mimic exact conditions in the lake.

Another example involves tracking contaminants from that originate with people. Metformin, a drug used to control Type II diabetes, is among the pharmaceuticals that survive wastewater treatment and end up in the lake. While the concentrations are low, one discovery that UWM scientists have made that this “residue” is persistent – it never degrades.

To determine if and how such a contaminant harms the fish and other organisms over time requires monitoring the organisms’ DNA for disease-indicating changes. The new vessel will allow scientists to put a specific portable lab – such as one with genomic tools – on the ship whenever it’s needed.

For Klump, who has been at UWM for 39 years , a new vessel with the capabilities needed for modern science has been at the top of his wish list. He said one disturbing trend he has noticed is that the kinds of student research that makes use of hard oceanographic data has been declining in recent years.

“It’s impossible for me to say thank you enough for the Maggi Sue,” he said. “I can’t honestly think of a more fantastic legacy.”