Emma Eisner is the 2019 Ritzenthaler Museum Research Internship Award Recipient. During the 2019 Spring Semester, she worked with the Milwaukee Public Museum’s (MPM) collection from Chajul, El Quiche, Guatemala which includes 121 grave goods from Mound 10, Tomb 1. The exhibit currently on the MPM’s Third Floor Mezzanine was created in the 1970s as a reconstruction of the Chajul tomb. Utilizing a sketch made by Dr. Lyle Armstrong who excavated the tomb in 1963, the Museum placed the objects in the exhibit space the same way as they were found in the tomb. The collection is comprised of a variety of materials including stone, jade, obsidian, and ceramic. 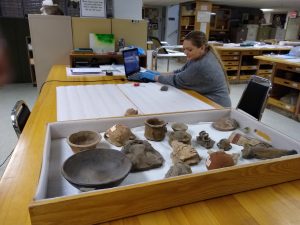 The MPM’s documentation had little information on the archaeologist or the donor of the collection; nothing was revealed about how they might have obtained the objects.  Emma found that in 1963 Mr. and Mrs. Floyd A. Hyatt of Michigan acquired this collection from Dr. Armstrong and in 1964 the Hyatts loaned the collection to the MPM for research. In 1973 and 1974 the objects were then officially gifted to the MPM. The majority of the objects were placed in the current exhibit in the late 1970s.

Research on the collection began by removing the objects from the exhibit to be carefully examined. An inventory of the entire collection was conducted; each object was measured, photographed, and a brief description was written. Emma’s research this semester has focused on an overall examination of the collection, museum documentation, and site research. Further research this summer will consist of a ceramic analysis on the incense burners and figurines.

Additional research on this collection is essential for many reasons. Archaeological research in the Highland Guatemala area has been relatively limited as archaeologists have favored the larger, more famous sites of the Maya lowlands to the north.  Research on the Chajul collection, which had not been done before, may contribute to our understanding of the Maya who once lived at Chajul and the surrounding region during the Classic (250-900 AD) and Postclassic periods (900-1521 AD) when the tomb was used.

This research has already provided the MPM with a better understanding of the collection as a whole, the tomb, and the site of Chajul. In addition to uncovering more about the tomb and region, Emma hopes that providing information on the collection will also help the Museum to create deeper experiences for future interpretation of the exhibit and to better document the collection for use by researchers in Guatemala and other parts of the world.