A Natural History of The Cedarburg Bog: Part I – Geology Insights

The Cedarburg Bog in Ozaukee County, Wisconsin is a complex forest swamp ecosystem developed upon a complex glacial geologic foundation. This initial investigation examines the stratigraphy of the swamp and portions of the underlying and surrounding glacial geology and hydrology with the intent of adding understanding to its development and natural history. Data was collected with the assistance of the 2007 Field Class, and compiled from the University of Wisconsin Field Station’s database.

Methods. The Field Station Geology Class of 2007 conducted new research into the geologic history of the Cedarburg Bog as part of the class work and fieldwork. A 40.9-foot core sample from the bog was collected using a coring tool that allowed 3-foot sampling intervals. The core was the first continuous sampling of the bog, and was examined for stratigraphic markers, clastic versus organic sediment content, water content, floral and faunal remains, and other color and textural information. The core was photographed, dissected, and remains wrapped in plastic and frozen for continued research. The class field trips also included examination of area glacial geology to understand the development of the Cedarburg Bog.

Glacio-Geologic Setting. The late sub-stages of the Wisconsinan Stage glaciation involve the development of the Cedarburg Bog. In a regional context the substages include:

The Cedarburg Bog began developing approximately 12,500 years ago, and previous studies suggest the bog pond originated in the late Woodfordian Substage, and accelerated development during the warming of the Twocreekan Substage. The oldest fossil pollen identified to date is 12,000 years old, and most modern plants were established by approximately 9,000 years ago (Field Station Data).

Island Tills. Tills comprise the East and West Islands, and are easily seen along the boardwalk trail on the western side of the bog. The till is dominated by dolomite cobbles and boulders, and also includes various igneous and metamorphic rocks (feldspar gneiss, quartzite, red granite, monzonite, diorite, basalt, gabbro) and sedimentary rocks (sandstone, conglomerate, dolomite breccias) (Figure 1). These indicate source areas north of outcroppings of the Niagara Dolomite to the north-northeast of the Field Station. 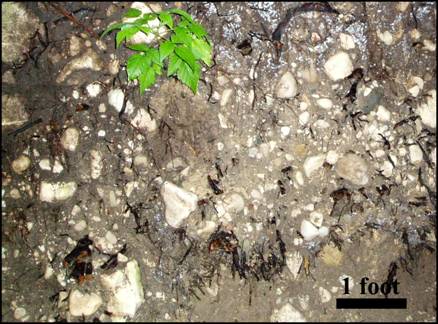 Basal Sedimentary Units. The deepest samples of the bog have yielded white to grayish white clay sediment and quartz-dominated fine to medium sand (with k-feldspar, plagioclase, hornblende, biotite, and rock fragments). These indicate clastic input from glacial meltwater sources, and may define the base of the non-glacial sediment bog stratigraphy (41.9 feet on the boardwalk open-water section (Figure 2); and 14 feet at the end of the boardwalk in the string bog section).

Core and probe studies by the Geology Classes of 2006 and 2007, and by Dr. Jim Reinartz’s team over the years, indicate several deep areas within the bog that bottom in clay or sand. The true bottom of the bog is not known, and these first sand or clay layers indicate last clastic sedimentation before the onset of mainly organic sedimentation. The thickness of the clastic units or the presence of till below these top sand and/or clay layers is not known.

Possible paleo-channels around and through the bog area can be predicted using topography, core and probe data, and a regional inspection of tills and alluvial deposits. These paleo-channels are shown in Figure 3. 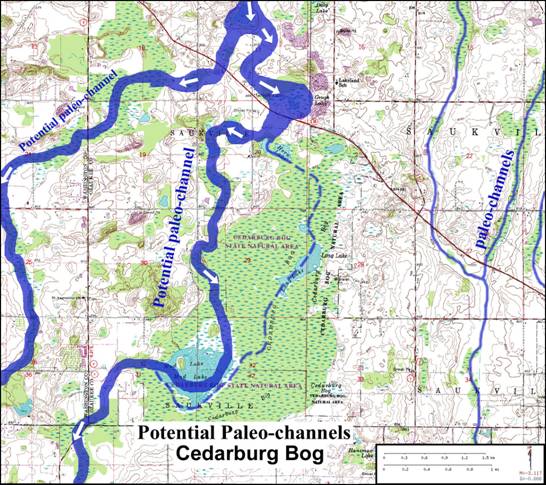 Figure 3. Possible paleo-channels in and around the bog, with arrows showing likely flow directions. Channels can be linked to the current Milwaukee River channel to the north.

Swamp Stratigraphy. Stratigraphy of the Cedarburg Bog has been examined to a depth of 40 feet. The sequence is dominated by laminated organic sediments (Figure 4); these are topped by a peat layer and underlain by glacial outwash clay-sized lake sediment. The organic sediment is comprised of alternating light to dark gray lamina, and typically contains over 80 weight percent water. The layers are typically absent of any clastic sediment (silt or sand). 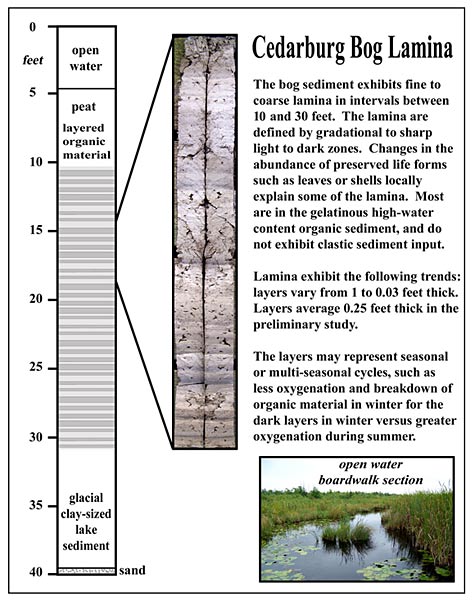 Within the organic sedimentary layers are a great variety of seed, leaf, shell and insect matter (Figures 5 and 6). Further work is needed to fully characterize the recovered species and place them within a time-stratigraphy and ecosystem framework. Preliminary interpretation suggests annular or longer (7 year?) cycles are responsible for the light to dark gray lamina. 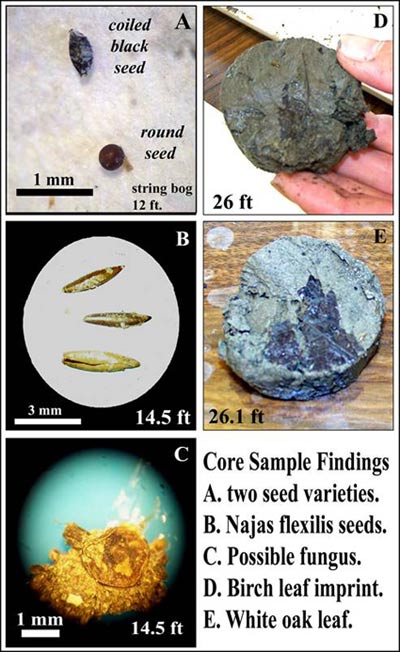 Common plants in the core in the medium to light gray bands include Equisetum, Najas, and a type of reed grass. Tree leaves, including oak, birch, elm and other species occur in slightly brownish medium-gray band (Figure 5D and 5E). The tree species likely indicate shallow water in close proximity to uplands (much like the East or West Islands of the modern bog).

The presence of a fish scale (Figure 6D) may suggest periods of open water, much like that observed in the bog today. 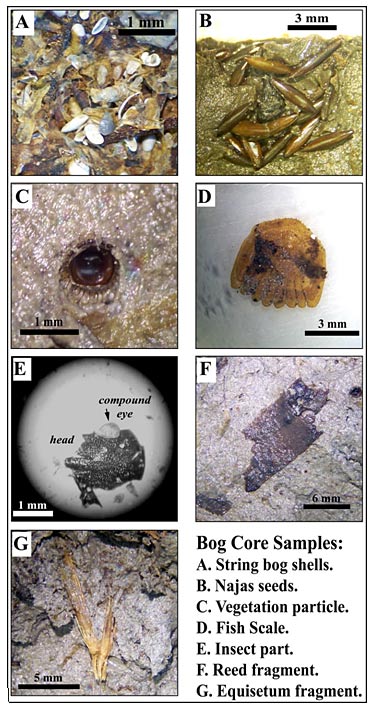 One important life zone was identified in the shallow (7 to 10 feet depth below water), and is comprised of high percentages of clams and gastropods (Figure 7). The “bloom” includes 4 to 5 species of gastropods and 2 species of clams. All species are very small, typically less than 5 mm. Shell material is not very abundant below 20 feet, and this may in part be due to the dissolution of shell material. 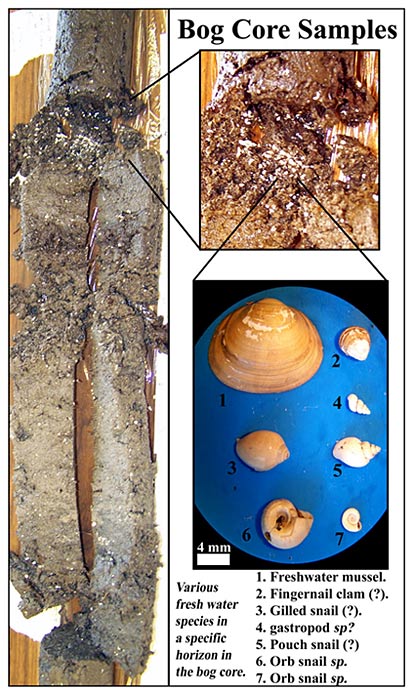 Figure 7. Shell-rich zone at 8 feet below water surface and below peat layers in organic sediment.

The core indicates changing sedimentation styles (clastic to organic), changing habitats (forest-proximal, to open water and all situations in between). Future work can attempt to collect pollen grains and chemical compositions of the organic sediment. Whether or not the fine lamina shown in Figure 4 represents annular events needs to be conclusively determined.

Future work on the core will also include an integration of the present day plant studies to better identify plant type in the samples. People enrolled in the geology class are free to revisit the saved samples.