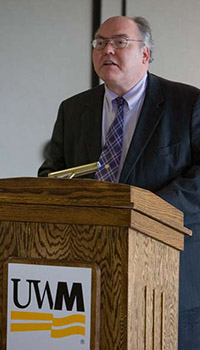 Professor Martin J. Medhurst delivered the 2008-9 Rhetorical Leadership Lecture entitled “Presidential Speechwriting and the Nomination Acceptance Address, 1932-2004” on September 25, 2008. His lecture examined the formal, functional, and stylistic dimensions of acceptance addresses across 72 years in order to identify the ways in which presidential speechwriters have influenced the creation, development, and generic expectations of this staple of political discourse. Professor Medhurst argued that acceptance addresses are a transitional form that draws from the candidate’s rhetorical past while creating space for a new rhetorical future.

Professor Medhurst is Distinguished Professor of Rhetoric and Communication and Professor of Political Science at Baylor University in Waco, Texas. His research centers on studies of rhetoric and the presidency with additional specialties in Cold War and religious rhetoric. He is the author or editor of eleven books and more than 75 articles or chapters. He is founder and editor of the journal Rhetoric & Public Affairs and of a scholarly book series of the same title published by Michigan State University Press. Professor Medhurst has earned numerous awards, including the National Communication Association’s Distinguished Scholar Award and its Golden Anniversary Monograph Award.