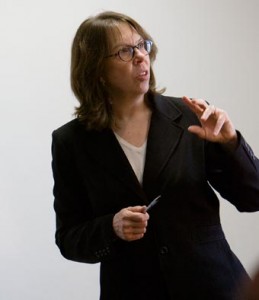 The 2007-8 Rhetorical Leadership Lecture entitled “Mediating Hillary Rodham Clinton: The News Media as Arbiters of Political Authenticity” was given by Professor Shawn J. Parry-Giles on April 16, 2008. Dr. Parry-Giles is Professor of Communication and Director of the Center for Political Communication and Civic Leadership at the University of Maryland. Her research centers on the study of rhetoric and politics. This lecture drew on research for a book project examining the U.S. news media’s coverage of Hillary Rodham Clinton as First Lady from 1992 through her U.S. Senate campaign in 2000 culminating in her bid for the presidency in 2008.

Professor Parry-Giles is the author or co-author of three books: The Prime-Time Presidency: The West Wing and U.S. Nationalism, Constructing Clinton: Hyperreality and Presidential Image-Making in Postmodern Politics, and The Rhetorical Presidency, Propaganda, and the Cold War, 1945-1955. Her research has garnered numerous awards, including the Eastern Communication Association’s Everett Lee Hunt Award. She regularly publishes in top journals for political rhetoric and was guest co-editor for a special issue of Rhetoric & Public Affairs on Campaign 2004. Parry-Giles also serves as Co-Project Director for Voices of Democracy: The U.S. Oratory Project and co-edits the on-line academic journal Voices of Democracy.