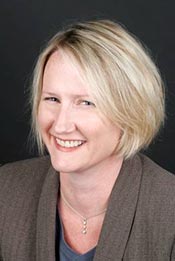 Professor Bonnie Dow, Associate Professor of Communication and Women’s and Gender Studies at Vanderbilt University, delivered the 2006-7 Rhetorical Leadership Lecture. The lecture, entitled “Rhetorical Leadership, Movements, and Media: The Difficult Case of 1970s Feminism in the U.S.,” was delivered on March 28, 2007. Professor Dow’s research interests include rhetoric and representation of the first and second waves of feminism in the United States. This lecture drew on research for her new book tentatively titled Framing Feminism: Television News and the Women’s Liberation Movement.

Professor Dow is the author of Prime-Time Feminism: Television, Media Culture, and the Women’s Movement Since 1970, which won the prestigious Winans-Wichelns Memorial Award for Distinguished Scholarship in Rhetoric and Public Address as well as awards from the Organization for the Study of Communication, Language, and Gender and the Popular Culture/American Culture Association. She recently co-edited (with Julia T. Wood) The Sage Handbook of Gender and Communication and co-edited The Aunt Lute Anthology of U.S. Women Writers, Volume One: 17th-19th Centuries. Professor Dow also has served as co-editor (with Celeste Condit) of both Critical Studies in Media Communication and Women’s Studies in Communication.