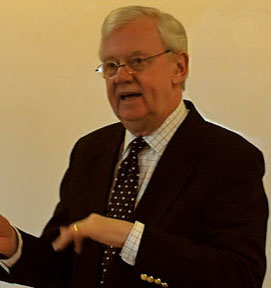 In February, 2005, Professor James R. Andrews of Indiana University presented “Rhetorical Leadership and the Struggle for an Ethical Culture.” This lecture was based on the premise that civic and social values are largely shaped by history, tradition, sacred texts, and practical experience — all of which are interpreted and negotiated through the art of rhetoric. Therefore, Professor Andrews argued, rhetorical leadership can be said to have played a singular role in defining the shifting, elusive “American identity” as well as the ethical code that both molds and reflects this identity. He developed these ideas and their implications for an ethical society using the illustrations of the 1963 March on Washington and President Woodrow Wilson’s position on issues of race.

Professor Andrews, who is Professor Emeritus of Communication and Culture, American Studies, and Victorian Studies, is the author or co-author of seven books and scores of essays, many of which focus on the historical-critical investigation of American and British public discourse. His other research interests include the role of rhetoric in forming an “American” national identity and rhetoric and imperialism. The National Communication Association has honored Professor Andrews with the NCA Distinguished Scholar, the Douglas Ehninger Distinguished Rhetorical Scholar, and the Winans-Wichelns Award. He also earned the Paul Boase Prize for Scholarship, a lifetime achievement award.