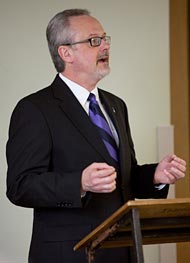 In February, 2010, John M. Murphy, Associate Professor of Communication at the University of Illinois presented a lecture entitled “Barack Obama, the Joshua Generation, and Political Leadership.” Professor Murphy argued that Barack Obama is unprecedented. Not only has an African American never before been elected to the presidency, but Obama did not possess the sort of military, political, or cultural experience that might have automatically qualified him for the office in the eyes of Americans. Murphy showed how Obama rhetorically adapted a powerful religious narrative, the Exodus story, and the roles available within it to assert his ability to lead the nation. In a series of speeches, Obama defined himself as a Joshua, Moses’ successor, poised to lead Americans into the new millennium. In turn, Murphy claimed, citizens renewed their covenant as American citizens when they elected him president of the United States.

Professor Murphy’s research focuses on American public address, with specialties in presidential rhetoric, the liberal tradition, and the Civil Rights movement. He is winner of the national Golden Anniversary Monograph Award and is a regular contributor to such select journals as Rhetoric & Public Affairs and Quarterly Journal of Speech. Murphy is especially well known for his work on the rhetoric of the Kennedys, Bill Clinton, and Martin Luther King, Jr.