When the COVID-19 pandemic hit, many UWM researchers quickly pivoted to exploring the disease’s spread and its impact as well as potential treatments. This quick response exemplifies the world-class, public-impact research that has made UWM one of America’s top research universities, as recognized by the prestigious Carnegie Classification of Institutions of Higher Education. The honor is bestowed on only 131 institutions nationwide.

In a year marked by protests against racial injustice, UWM also launched the Toward an Anti-Racist Campus initiative, awarding grants to faculty and staff for researching racial inequities on campus and devising solutions, with a mandate that programs be implemented by the Fall 2021 semester.

Academic, governmental and industry leaders know they can count on UWM for cutting-edge, life-changing work across a broad spectrum of fields, including health care, freshwater sciences, entrepreneurship and energy. In fiscal year 2020, the university had $62.7 million in research awards. Nearly three-quarters of that amount – $45.7 million – came from federal agencies. Here is a breakdown of UWM’s research awards for fiscal year 2020, as well as a look at the 10 largest federal grants that were active that year. 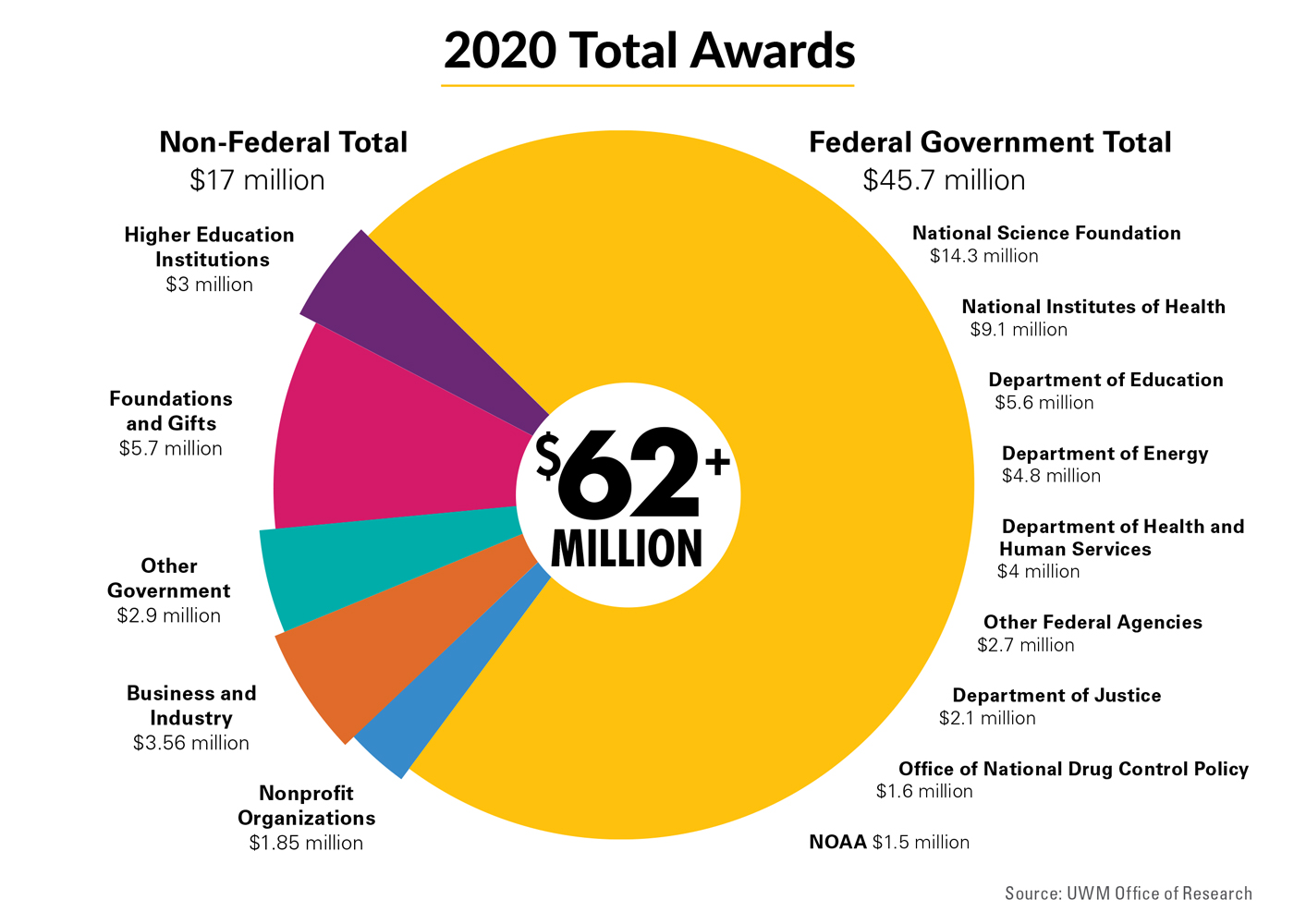 The 10 largest federal grants at UWM

Ocean farming a biofuel source
Filipe Alberto, biological sciences
$5.2 million over four years, U.S. Department of Energy
Giant kelp, the fastest growing organism on Earth, could be a valuable biofuel source. UWM researchers are creating a seed bank and using genomic selection to improve traits. This will allow others to not only breed the crop and farm it in the ocean, but also protect it from environmental threats.

Environment and children’s brains
Krista Lisdahl, psychology
$3.8 million over three years, National Institutes of Health
A partner in the largest long-term study of brain development and child health, UWM is tracking biological and behavioral factors in 384 Wisconsin children to identify how environment and biology interact to affect brain development. The children are being followed from ages 9 or 10 through young adulthood.

A better way to weigh
Michele Polfuss, nursing
$3.6 million over five years, National Institutes of Health
Children with spina bifida, a developmental disability, have higher rates of obesity than typically developing peers. Inherent characteristics of the diagnosis make it difficult to accurately measure height, identify obesity and monitor trends. This project aims to develop an accurate method of measuring body composition in a clinical setting.

Easing pain for manual wheelchair users
Brooke Slavens, health sciences
$3.1 million over four years, National Institutes of Health
This research aims to establish clinical guidelines that will alleviate shoulder injury and pain in children and adults who have spinal cord injuries and use manual wheelchairs. Researchers are testing whether early use of a wider variety of propulsive movements can prevent pain.

Cosmic big data management
Patrick Brady, physics
$2.8 million over two years, National Science Foundation
This project supports planning for scalable cyberinfrastructure to support multimessenger astrophysics, which combines observations of light, gravitational waves and particles to understand some of the most extreme events in the universe. This cyberinfrastructure investment will increase new discoveries by allowing quick analysis of large-scale data from all types of astronomical measurements.

Better battery protection
Deyang Qu, mechanical engineering
$1 million for one year, U.S. Department of Energy
Boosting energy density in rechargeable lithium-ion batteries is key to broadening their commercial use. One obstacle is the formation of microscopic fibers on the lithium’s surface during charging and discharging, which can lead to fires or explosions. UWM researchers are creating a dynamic protection layer that will prevent this.

Using light and force to study proteins
Ionel Popa & Valerica Raicu, physics
$983,000 over three years, National Science Foundation
Researchers will design and construct a tool for three-dimensional study of interactions among proteins performing vital functions inside the body. The tool will use fluorescent tags to examine the mechanical response of proteins working together, which is important for investigating drugs or detecting antibodies.