It’s 5 a.m. at the UWM Field Station, a natural area near Saukville, Wisconsin, about 45 minutes north of UWM’s main campus. Biology students, led by postdoctoral researcher Dorothy Christopher, drag some of the hundreds of numbered potted plants from the hoop house and place each on the outside grass into a slot on a spray-painted grid. Then they don headlamps and trim all the flowers from each plant except for one.

With their controlled environment set up, they are ready for the bumble bees, which come to forage around 6:15 a.m. To accomplish this day’s objective – following the flight of bumble bees that enter their makeshift garden – they have simplified the task by limiting the number of available flowers.

“We use the native monkeyflower because their flowers only last a single morning,” says Christopher, who works in the lab of Jeffrey Karron, professor of biological sciences in the College of Letters & Science. “When we come in, the just-opened flowers have a full pollen load.”

A hefty pollen load is what the bumblebees are looking for, and they tend to stick with a particular plant species that delivers. As they forage, their bodies are covered in pollen, with the top layer picked up from the flower they are currently visiting and the deeper layers from flowers on previously visited plants.

Karron is at the forefront of quantifying paternity patterns among flowering plants. Ultimately, he’s interested in what influences successful plant reproduction, and why nearly all flowering plants are hermaphrodites, meaning that male and female parts are present on each flower.

Karron’s work is important, says Randall Mitchell, a University of Akron professor of biology who’s a leading scientist in the field. Understanding the complexity of pollinator-enabled reproduction is necessary to protect crops, wild plants and the viability of endangered plants.

For plants to make seeds that turn into strong and healthy new plants, much of the reproductive process rides on the pollinator’s choices. Although a plant’s flowers contain both the eggs and sperm, pollen begins the process of linking the two inside a flower to produce the offspring – seeds. 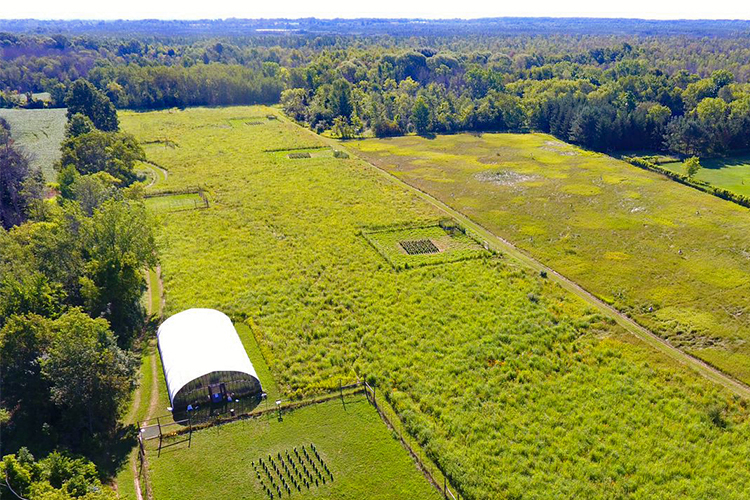 At the UWM Field Station, Jeffrey Karron's research is discovering more about the relationship between bees and the flowers they visit. 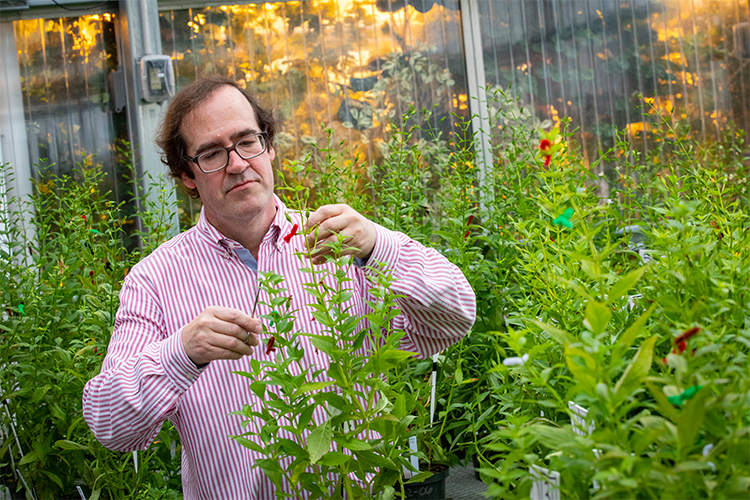 By combining genetic information with meticulous pollinator-mapping, Karron (pictured) has answered questions about plant reproduction that no one else has been able to. (UWM Photo/Troye Fox) 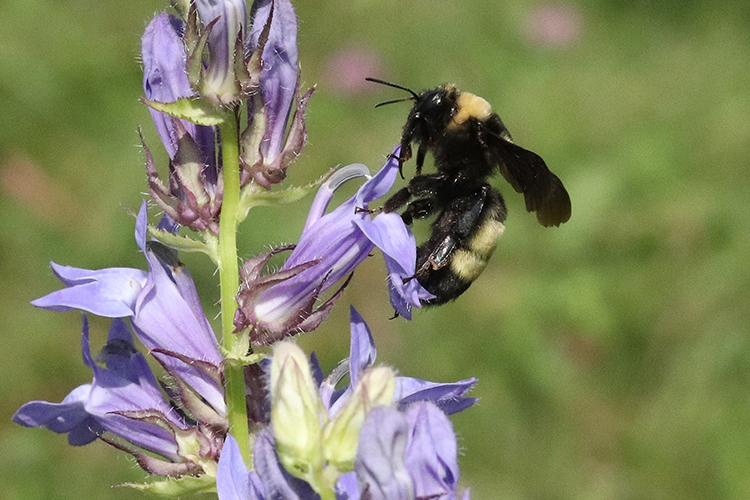 When a bee visits a flower, its body gets covered in pollen, which then mingles with the pollen it's already picked up from other flowers. 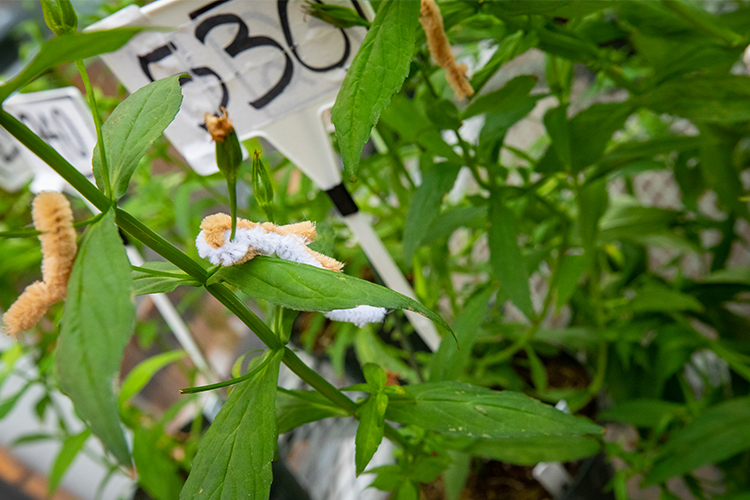 Researchers attach pipe cleaners to monkeyflower plant stalks to collect and track data. The color of the pipe cleaner denotes the date a bee visited the plant. (UWM Photo/Troye Fox) 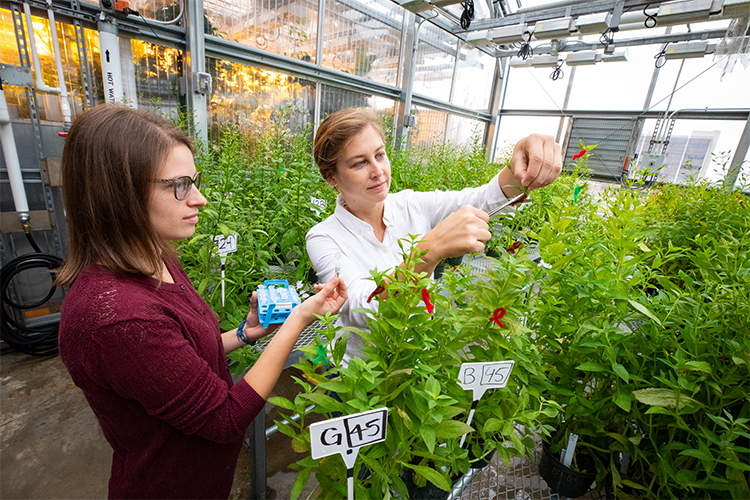 At the UWM Field Station, Karron's research group has made a number of discoveries about the reproductive strategies of plants. (UWM Photo/Troye Fox)

But pollen first must be moved from a male part of a flower, called the anther, to a female part, called the stigma. And pollen can come from the same plant or from flowers on other plants of the same species. In fact, pollen from multiple monkeyflower plants could be left during a single bee’s visit.

Complicating matters further, plant reproduction can happen in two different ways. A flower’s female parts can receive pollen from their own anthers or from those on different plants of the same species – whatever plant the bee last visited.

When pollen comes from flowers on the same plant, it’s called self-pollination or “selfing,” while reproduction involving flowers from two different plants is termed cross-pollination. Seed production after selfing is considerably lower than cross-pollination, and the resulting seedlings are not as healthy. The lowered fitness is similar to the consequences of inbreeding in animals and results from mating with a limited gene pool. Cross-pollinated seeds grow into a much healthier second-generation plant.

The source of the fertilizing pollen is considered the male flower that sired the seeds, while the flower where the pollen was deposited is the mother. Because of these different possible outcomes, pollinator behavior matters, and it’s important to know which flowers a bee visited, and in which order.

“When a bee visits the first flower on a plant, 80 percent of the resulting seeds are cross-pollinated,” Karron says. “By the time it alights on the fourth flower of that plant, almost all the seeds are self-pollinated.”

Important as it is to establish where the pollen for each seed came from, that information doesn’t come easily, given nature’s onslaught of variables. But through cleverly engineered experiments, such as Christopher’s single-flower bee garden, Karron tracks the bees. He can determine where they gather their pollen, and where they leave it, and he establishes the monkeyflower’s mating histories.

Inside his hoop house at the Field Station, an experiment’s monkeyflower plants are numbered and, by the end of each study, pipe cleaners of various colors are attached to some stalks. Like a hospital patient’s medical bracelet, the pipe cleaners are part of a detailed record-keeping system. They denote where a flower had been in the garden, and the pipe cleaner’s color indicates the date of a bee visit.

Karron doesn’t rely on human observation alone. Each plant used in an experiment is genotyped before it’s moved outside and bee mapping begins. This way, the researchers have a “signature” that they can later match to a seed’s genetic profile.

“We put in a ton of work on the front end,” Christopher says, “so that we can differentiate pollen from the various plants. That’s how we can track how far the pollen has traveled.”

UWM’s Field Station provides the swath of undisturbed nature required for the research, which accounts for not only ecological factors, like pollinator abundance, but also genetic variables, like the shape of flowers. “I can replicate populations at the Field Station in order to look at how their mating habits change under different conditions or environments,” Karron says. “And I can easily clone plant populations by simply dividing the plants. You can’t do that with birds or mammals.”

As labor-intensive as these experiments are, the most challenging part, Karron says, is managing the scale. At the end of his most recent study, 8,000 seeds were harvested and genetically analyzed.

By combining genetic information with meticulous pollinator-mapping, Karron has answered questions about plant reproduction that no one else has been able to. Mitchell, a longtime research collaborator, says Karron is identifying what influences bee behavior and connecting it to their evolutionary impact on plant reproduction. It’s allowed Karron to start unraveling why the hermaphrodite reproductive strategy is so successful, despite self-pollination being a handicap to long-term plant survival.

The advantage, Karron has shown, is that dual sex roles double the number of potential mates a parental plant could have. That increases the genetic diversity of seeds, diversity that ensures the overall hardiness of seedlings.

Karron’s research group has made other long-sought-after discoveries. They demonstrated that mate combinations for individual flowers on the same plant can differ dramatically. That is, the pollen that produced seeds in any two flowers could have been from the plant itself or from a bloom of the same species miles away.

They were the first to demonstrate that pollinator responses to showy floral displays increase the selfing rate for plants. The reason? After visiting one flower, bees will often “trick or treat” to the next closest flower, often on the same plant.

And Karron’s research team showed that the presence of a competing flowering plant species boosts selfing patterns in monkeyflower because the competitor often sidetracks the bees. Cross-pollination only occurs when the bees alight on different monkeyflower plants consecutively. Even the species of bumblebee (there are five at the UWM Field Station) can change the mating patterns, he says.

Tracking wild pollinators and correlating their pollen quantitatively with seed paternity is painstaking work that few plant biologists have attempted. But Karron’s fastidious field work has yielded plenty of scientific evidence that proves a plant’s reproductive strategy is anything but random.

“I love to design evolutionary experiments,” he says. “If we do it right, we can get the bees themselves to explain their behavior.”