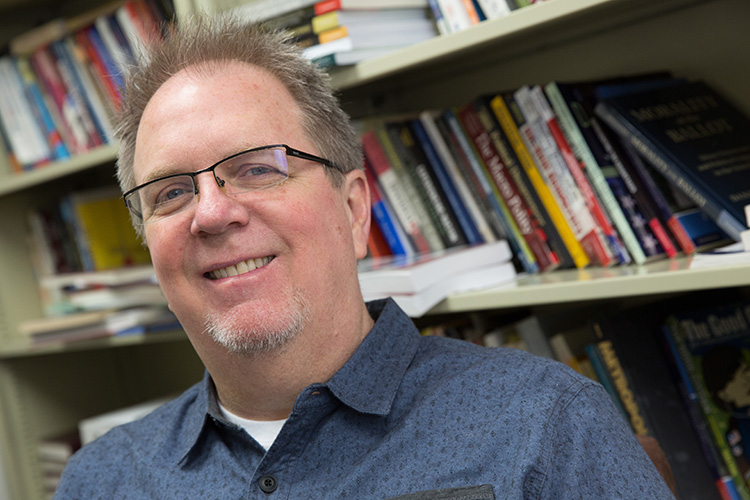 Thomas Holbrook says some candidates may try aggressive tactics to try to stand out in a huge field during the Democratic debates. (UWM Photo/Troye Fox)

The 2020 Democratic presidential debates begin this week in Miami, the first faceoff among candidates in the largest primary field in recent U.S. history. The unusual format features 10 candidates squaring off on Wednesday, with another 10 debating on Thursday.

Thomas Holbrook, a UWM distinguished professor of political science who has studied presidential campaigns for nearly three decades, says viewers could see candidates ahead in early polling play it safe to maintain front-runner status. That means focusing on their own campaigns rather than attacking other candidates, as well as avoiding extreme statements.

Aggression usually means one thing – the candidate is trying to shake up the race or stand out in some way.

Holbrook, who is the Wilder Crane Professor of Government in UWM’s College of Letters & Science, offers some other tips to viewers and takes a look back at the Republican primary debates early in the 2016 election cycle, which featured as many 11 candidates.

Hillary Clinton, who lost to Donald Trump in the 2016 election, was the only woman who participated in the Democratic debates four years ago. Carly Fiorina was the only woman on the Republican side in the early debates before she left the race.

The Democratic debate lineup this week features six women. Elizabeth Warren, Amy Klobuchar and Tulsi Gabbard are among the 10 candidates participating on the first night, with Marianne Williamson, Kamala Harris and Kirsten Gillibrand taking the stage on the second night.

“That’s one of those dynamics that we have to still figure out. On a stage like this where you’ve got several female candidates and several male candidates – what roles do gender stereotypes play in terms of how women ‘should’  be acting?” Holbrook said. “Or even how men should be acting when they’re talking to or about the female candidates. It’s going to be interesting to see how that plays out.”

At this point in the 2016 election cycle, Jeb Bush had a commanding lead in the Republican field. The early GOP debates had 10 or more candidates, so the Democratic debates this week might draw some comparisons.

There is one big difference: the presence of Trump.

“What really stood out was they were just completely upended by the presence of Donald Trump, and then they became these rollicking, Wild West-style and, at some level, nothing-barred debates,” Holbrook says.

The debates weren’t necessarily the drivers behind Trump’s rise, though they did provide Trump a “nice platform” to appeal to his base, Holbrook says.

“I suppose it’s possible that something like that could happen on the Democratic side – but it really is kind of an unpredictable thing – nobody I think predicted it was going to unfold that way in 2016.”

The debates could also help to whittle the field if a candidate doesn’t look comfortable in the spotlight or fumbles an answer. Those images can become social-media fodder and leave a lasting image with viewers.

The next Democratic debate is scheduled for July 30-31 in Detroit. The Democratic National Convention will be held in Milwaukee in July 2020.