Furrow, the literary magazine created in an English class at UWM, has won the National Program Director’s Prize from the Association of Writers and Writing Programs.

The group gives the prize every year to recognize superior content in a literary magazine.

“Furrow … is an outstanding journal. The poems, essays, and stories, as well as the works of visual art, tackle the human experience through wonderfully crafted, unusual, tangible, and richly musical voices,” said contest judge Tyler Mills, assistant professor at New Mexico Highlands University. “I found myself getting lost in each work I was reading so that as I reached the end, I was both deeply satisfied but also wanted to turn the page.” 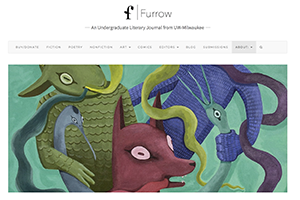 The prize comes with a $1,000 award and recognition in the group’s magazine, The Writer’s Chronicle, and acknowledged at the group’s annual conference.

“I think we all feel proud to be able to publish the work of other undergraduate artists and writers in such a beautiful, professional format,” said Valerie Laken, associate professor of English and faculty supervisor of the magazine.

The literary magazine is created in the spring semester every year in English 418: Literary Journal Production, where each student is each given a role in crafting the magazine.

Laken notes that working on Furrow often helps students further their career goals or creative dreams of getting published.

“Playing the role of editor teaches students volumes about how to improve their own writing and art, and how to avoid, in their own creative work, the kinds of pitfalls that annoy editors,” Laken said. “Nothing will teach you how to write a publishable poem like reading 500 poems and debating, with your co-editors, which 20 of them are actually publishable.”

The award money will be used to cover the costs of publishing next year’s edition of Furrow.