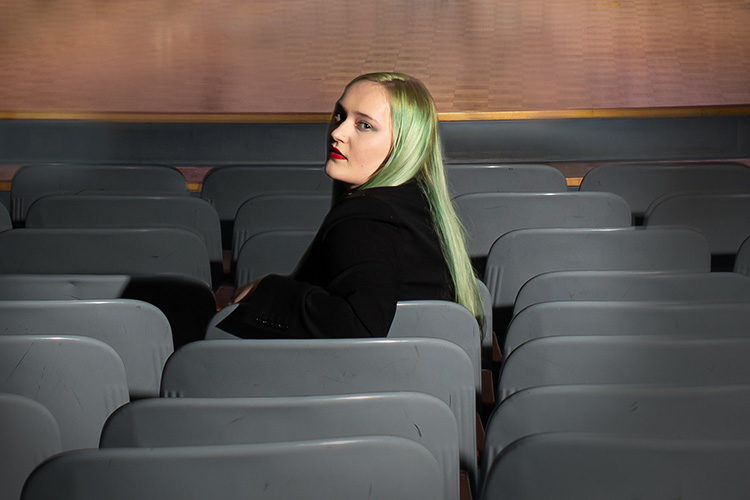 UWM student Xai Osa has been writing songs since she was in elementary school. She's working toward bachelor's degrees in vocal performance and in composition & technology. (UWM Photo/Elora Hennessey)

How do you turn a hashtag into an opera?

That’s the challenge a UWM student faced when she decided to turn #MeToo into a musical production. The UWM “super senior,” working toward her BA in vocal performance and her BFA in composition & technology, goes by Xai Osa, her artist/performing name.

Growing up in the Milwaukee area, she was always singing and began composing her own music when she was young, she recalled.

“I was a little songwriter in elementary school …  writing really fun songs, drawing lines for the pitch and to try to remember how to sing it. That’s what I wanted to do was be a singer/songwriter.”

She became fascinated with Björk, an Icelandic singer and songwriter who had developed her own experimental style that drew on influences ranging from hip-hop to classical and electronic pop. That led to interest in others who were experimenting musically.

“There are so many ways to push the boundaries of music,” Osa said.

She came to UWM because she wanted to stay in Milwaukee, but found more than she expected in the Peck School of the Arts.

“I started with vocal performance degree. Then I found composition and technology courses on campus, and decided I had found my place with all UWM had to offer.”

When she decided to compose an opera, she turned to the themes captured in the #MeToo hashtag.

She wanted to incorporate perspectives outside of her own, and so began researching both in books and online and talking to people locally about what the hashtag meant to them.

Working with her mentor, Amanda Schoofs, senior lecturer in music, she wove screenshots of online messages and other social media snippets into fictional characters to create the 25-minute micro-opera, “Echo Ascension: Her Voice is Heard.”

The piece was performed live for the first time in mid-March at a dress rehearsal. Then, of course, the pandemic hit and Peck School performances came to a halt.

Osa is not discouraged, however. She’s continuing to fine-tune and expand the opera because she feels, she said, that the music and words open up a new perspective on what #MeToo” is all about.

“It’s about the power of sharing your story and how that affects other people…how that can influence them to make the next step in their healing.”