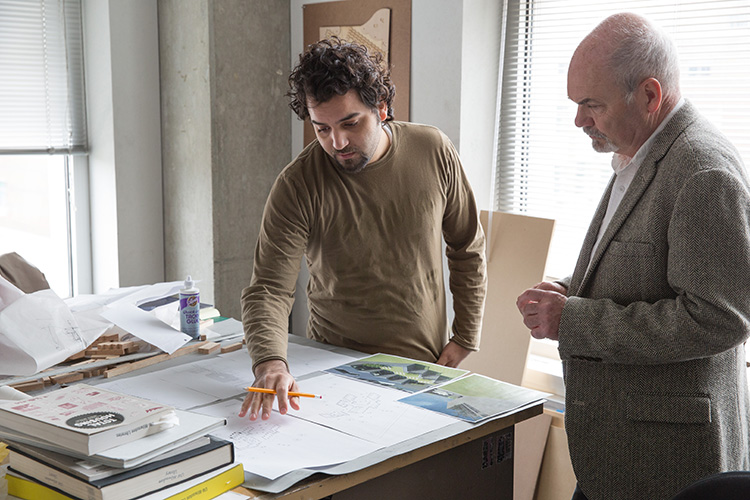 Professor Don Hanlon (right) works with student Tarik Alsaggaf on a section of a design for a new community for war refugees. Hanlon has challenged his architecture and urban planning students to think about how they could help refugees from the Middle East while addressing population loss in the Rust Belt. (UWM Photo/Troye Fox)

Living in Milwaukee, architecture Professor Don Hanlon is all too familiar with the decline of the nation’s Rust Belt cities. He’s also sensitive to the plight of the world’s 60 million refugees.

This semester, he challenged his students to come up with one design that could address both problems. “I thought if I combined these issues, it would create an interesting situation for my students to think about what their role as architects might be,” he said.

The result was a plan for a new Detroit-area community to house refugees from Syria, Afghanistan, Iraq and other war-torn areas while they work toward U.S. citizenship. Hanlon asked his students to place the community near Hamtramck, an old Polish enclave that has lost most of its population with the decline of the domestic auto industry. Hanlon also chose the Detroit area because it already has a large population of Middle Eastern immigrants.

Tarik Alsaggaf, who came from Saudi Arabia to study at UWM, said he was interested in learning about the plight of refugees everywhere, but felt he had special insight into the needs of people from the Middle East.

“The Syrians are my brothers, my relatives,” he said. “We are from almost the same culture, and I would like to help them.”

The project also combined architecture and urban planning, which appealed to Mitchell Pignotti, a graduate student who is studying both subjects. Pignotti was intrigued by the challenge of finding ways to re-use an existing city, while researching and creating a new one.

“I liked the idea of bringing these old cities to life again,” he said.

The semester-long project required students to design housing in three interlinked villages, as well as urban green spaces, garden plots and shared public spaces. The overall goal, Hanlon said, was to educate students about the issues facing refugees and the Rust Belt and get them thinking about ways to improve lives.

“In many cases in architecture schools, we reinforce our students’ perceptions that architecture is all about their personal expression,” he said. “I feel it’s very important that we deal with difficult issues and try to get students to examine their underlying values.”

Hanlon also wanted his students learn to work together.

“A misconception that architecture programs convey to students is that they are all independent geniuses and they’ll be able to work independently like Frank Lloyd Wright and other star architects,” he said. “The reality is they’re going to be working with many other people from many different backgrounds.”

Alsaggaf, who graduates this month, said the ability to work collaboratively is one of the skills he looks forward to eventually taking back to Saudi Arabia.

“It was fascinating how we all worked together and interacted in this class,” he said. “We almost worked as one body.”

Hanlon and his students hope to eventually present their plan to Detroit officials, although they said they realize political and financial issues make construction unlikely.