Growing up in Cuba, Rene Izquierdo never cared much for music. He was more into sports, like soccer and basketball. His mother worked for Cuba’s national gymnastics team, but she wanted her son to follow his talent for physics into a stable career in science. That maternal dream took a hit when Izquierdo’s father, a biology major who dabbled in music, treated him to a guitar concert in Havana at age 9.

At first, Izquierdo remembers being bored with the guitarist’s performance – until he broke into “El Decameron Negro,” a sweeping piece written by Cuban composer Leo Brouwer. “I got goosebumps when he played,” Izquierdo says. “I wanted to be able to do to other people what that guitarist did to me.”

Today, Izquierdo is a world-renowned classical guitarist and recording artist who has played hundreds of concerts around the globe, averaging 70 to 90 each year.

The Peck School of the Arts professor joined UWM in 2004 and created the classical guitar department, then built it into one of the country’s top guitar programs. He also honors his parents and homeland in his research by unearthing, cataloging and often recording works from classical Cuban composers that might have otherwise been lost to time.

“Because he is from Cuba, he has access to a lot of pieces and some of the best recordings of these pieces,” says Scott Emmons, professor of music education and dean of the Peck School. “He’s making it so other people from around the world get to hear them.”

Izquierdo’s father bought him his first guitar after that watershed concert in Havana, but his mother remained uneasy about her son pursuing it seriously. She knew how hard a musician’s life could be. Still, young Izquierdo carried the guitar around his home village of Cojímar, an enclave on the east side of Havana where Ernest Hemingway used to fish.

Local guitarists gathered around a statue honoring the American author and played traditional Cuban songs. That’s where Izquierdo learned chords and started absorbing the rich history of guitar music in his native country. “My mother wasn’t pleased,” he recalls. “But at least I wasn’t drinking.” 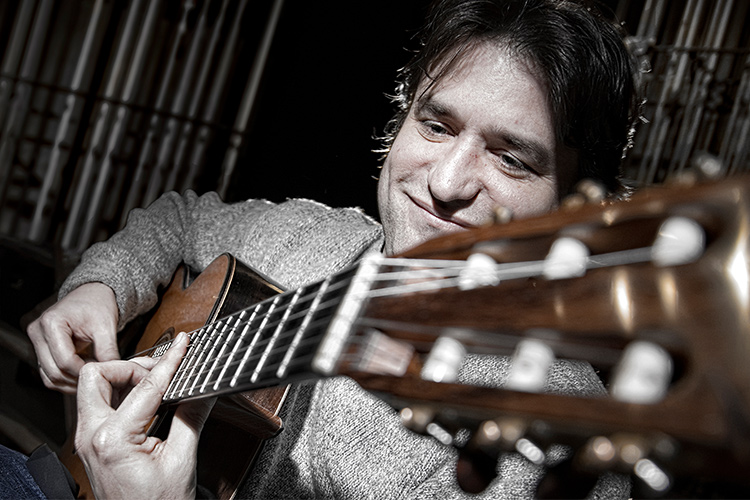 Izquierdo steeped himself in the Cuban guitar tradition on those Havana streets. After primary school, he enrolled at the capital city’s Guillermo Tomás Bouffartigue Conservatory, Amadeo Roldán Conservatory and Superior Institute of Art. At Superior, he learned from renowned Cuban guitarist Jesús Ortega and even took occasional lessons from Brouwer himself. At age 20, Izquierdo fled his home country and the communism that stifled his creativity.

In the United States, he was exposed to a variety of guitar repertoires while earning his Master of Music degree and Artist Diploma at the Yale School of Music. Later, while Izquierdo was pursuing a music education master’s degree at Lehman College in New York City, Argentinian composer Jorge Morel suggested it might be wise for the young Cuban to travel a lesser-known path by finding, researching and performing music that’s not widely known. “He told me there are already thousands of recordings of these standards,” Izquierdo says. “Then he asked me, ‘What do you have that is unique?'”

The answer was plain in his past, and Izquierdo began researching the music of his homeland. He started with the foundation of his own education, as much from the streets as his music history classes from the conservatories and Superior Institute of Art.

He knew Cuba was a cauldron of Spanish melodic and instrumental music, influenced by French colonists fleeing the Haitian slave revolution of 1791. It all mixed in Cuba, given Havana’s status as a main port between the Americas and Europe.

Prior to 1931, when the Cuban School of Guitar was founded, there was no organized entity that cataloged music for the Cuban guitar repertoire. Still, Izquierdo’s research reached back into the 1600s and 1700s and latched on to familiar composers, seeking their more obscure compositions and later recordings. Then he worked his way through the decades and centuries, all the way to the 1920s and 1930s.

He followed the thread to lesser-known musicians who had influenced those better-known guitarists. He scoured archives and interviewed musicians, historians and civilians who remembered the songs from their own childhoods. Along the way, he found music written for piano, strings and other instruments. Where possible, Izquierdo translated the works for the six-string.

By the time Izquierdo was ready to record his collection of the Cuban works he’d uncovered, he had arrived at UWM, which provided grant money to fund that album. He repaid the university by making UWM more than just a top repository for Cuban classical guitar music. He laid the groundwork for a world-class classical guitar program that attracts the most talented and promising students, including young artists from Vietnam, Uruguay, Chile and Belgium.

In addition to teaching students and doing research at UWM, Rene Izquierdo travels around the world to perform up to 90 concerts every year.

Much of Rene Izquierdo's research focuses on finding, cataloging and recording music from classical composers in his homeland of Cuba.

Guitar student Leonela Alejandro knew of Izquierdo's reputation as a performer and teacher, so when Hurricane Maria forced Alejandro to leave Puerto Rico to continue her studies elsewhere, UWM was a natural choice.

“He performs in Thailand and Spain and Italy and France, and students hear him at these concerts,” says Emmons. “And wherever he performs, in his limited free time, he helps potential students with his teaching. They improve, and then they want to come and study with him.”

As a young guitarist, Leonela Alejandro saw Izquierdo at a recital in her homeland of Puerto Rico and knew his reputation well. She’d begun pursuing a bachelor’s degree in guitar performance, but when Hurricane Maria devastated the island in 2017, it became difficult to continue her studies there.

“When I first started considering transferring, I’d listen to other professors’ opinions. One of the first names that always came up was Rene Izquierdo,” she recalls. “I heard so many good things about his teaching, and I was such a big fan of how he performs.”

UWM became her transfer destination, and Alejandro says Izquierdo has been crucial to her growth as a musician.

“The clarity of his teaching, he tells you exactly what’s wrong and exactly how to fix it,” she says. “But at the same time, he really values your opinion. It makes the teaching and learning process two-sided instead of a professor just telling you what to do.”

Drawing enthusiastic recruits like Alejandro to UWM is just one way Izquierdo has built the program’s profile. Since 2012, UWM classical guitar students have won more than 65 international prizes and competitions, and many have gone on to become respected teachers and performers in their own right. And Emmons is effusive in his praise for Izquierdo’s impact on the program. “Easily the best between the coasts,” Emmons says. “That’s all a credit to him.”

Beyond UWM, Izquierdo has contributed to the local music scene by founding the Classical Guitar Society in Milwaukee and leading the Milwaukee Mandolin Orchestra that’s existed for more than a century. He’s also created an internship program with the Latino Arts Strings Program and started a concert series that brings the world’s finest musicians to play for Milwaukee residents.

And of course, Izquierdo himself performs in Milwaukee, frequently playing the music of his Cuban homeland. Audiences watch his fingers pluck and dance over the strings, often producing melodies and rhythms that, but for his research, might have otherwise been lost to the ages.