In a tiny village just outside Dakar, Senegal, people wonder if the 8-year-old girl who won’t talk and avoids eye contact is bewitched.

In a Milwaukee high school, administrators think the student who routinely leaves the classroom without permission is a behavior problem and should be disciplined.

But special education professor Elizabeth Drame sees these children differently. She’s conducted more than a decade’s worth of research and interviews with parents, teachers and advocates for children who come into classrooms with diagnoses such as autism, emotional/behavioral disorders and learning disabilities.

She has worked to address the special education needs of these children in Milwaukee, Kenya, New Orleans, Ghana and Senegal, focusing on black communities. She’s done so collaboratively, sometimes while embedded in a parent group or overseeing a large community project. It’s complex work, but Drame believes she’s identified one facet that helps all children prepare for a productive life: inclusion.

In evening courses with her special education students – many of whom are already classroom teachers – Drame challenges long-held assumptions and biases regarding children who have special needs.

“It’s beneficial to all of us to see lives and circumstances not as ‘normal’ or ‘abnormal,’” Drame says, “but to understand that there are different ways of being. If seeing differences among us becomes normal, then inclusion of all will become normalized.” 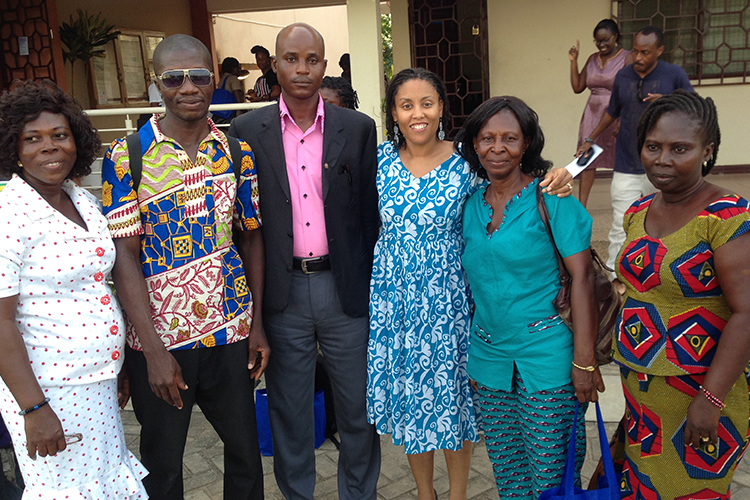 Drame, named a Fulbright Senior Research Scholar in 2011, has long supported education efforts in Africa, such as at this workshop in Ghana in 2015. (Photo courtesy of Elizabeth Drame) 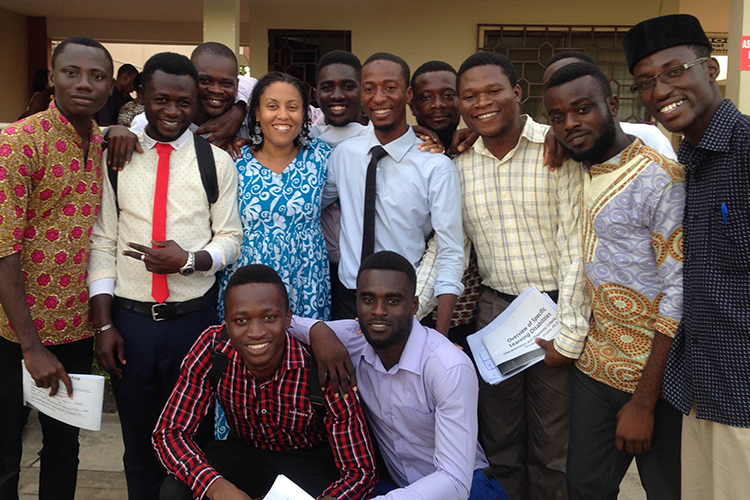 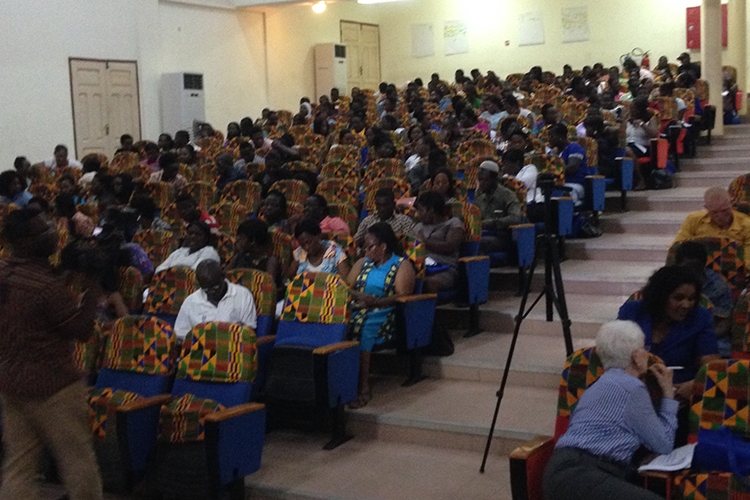 Drame was named a Fulbright Senior Research Scholar in 2011, then relocated her research and two school-age children from Milwaukee to Dakar, Senegal. There, her research projects included the evaluation of education centers for children with disabilities. She noticed that autism seemed particularly challenging for educators and families.

Her observations supported findings from the African Child Policy Forum: The continent faces a shortage of trained and special education certified therapists, physicians and educators. Rehabilitative services that are provided weekly in the United States might happen only two or three times a year in Dakar.

Services in the U.S. are more accessible, Drame notes, but barriers still exist, particularly in urban communities. For the one in 68 American children who have autism, diagnoses can be made as early as age 2 or 3. But Drame says children of color might not receive an accurate diagnosis until much later.

“If you operate from the assumption that black families are disorganized and come from violent communities, and are full of all the different things that are going to impact the child’s language and development,” she explains, “then we can see medical professionals leaping to an assumption that the child in front of them has a behavioral problem or developmental delay rather autism.”

To address these barriers, Drame launched the interdisciplinary Autism Spectrum Disorders Certificate Program in 2010. Since returning to Milwaukee in 2012, Drame has sharpened the focus of her research on autism.

She’s prioritized working with families of color because they are often shut out of policymaking and advocacy efforts. She takes their concerns personally, and they’re a big reason she helped resurrect the now-annual Milwaukee Urban Autism Summit in 2014.

Twenty-five years ago, Emily Levine consulted experts from Milwaukee to Chicago looking for autism answers on behalf of her son. Now, she directs the Autism Society of Southeastern Wisconsin. Many Milwaukee parents the society serves can’t take a day off work, drive very far for consultations or pay for a second opinion. The autism summit is for them.

“Instead of having a PowerPoint format by a lecturer,” Levine says, “we’re having an interactive discussion that’s panel-driven. We’re using the lived experiences of people in the community to support each other.”

Drame also teaches the nuanced intersection of behavior, race and culture to students like Jonathan Arens. A first-year special education teacher in Milwaukee, he works with high school sophomores diagnosed with emotional/behavioral disorders – EBD, for short – and other health impairment, or OHI.

The EBD diagnosis is applied to children whose behavior or emotional responses deviate from established norms, which affects their ability to meet expected classroom standards and behavior. OHI describes someone who doesn’t fully respond to environmental stimuli, possibly due to another health condition like asthma or attention deficit disorder. Both conditions prompt teachers and administrators to create an individualized education program, or IEP, a complex legal document that identifies a child’s learning needs and spells out how those needs will be met.

For Arens, Drame’s Behavioral Supports evening class at UWM is a place to sift through the delicate demands of his brand-new career.

“EBD is a controversial diagnosis because it’s predominantly given to African-American boys. You have to wonder how that’s decided,” he says. “Dr. Drame’s class provides really good cultural context – you need context for everything you do as an educator – for understanding what services these students need to succeed.”

Arens is paired with a regular teacher who writes and teaches the lessons, while Arens makes sure all students’ IEPs are precisely followed. After two semesters with Drame, Arens knows well her most important advice for special educators: “Behavior is a form of communication.”

It reminds him of a student who frequently leaves class without permission and is widely considered a “behavior problem.” Arens stepped back from the labeling and, over several months, analyzed the child’s behavior pattern, which was rooted in being teased about reading difficulties. Once the communication within the behavior was found, Arens developed a plan to provide resources that would improve the student’s reading.

Maybe that child will never read easily. Perhaps the child will stop formal schooling after receiving a high school diploma. But Drame insists on viewing children who have disabilities through a wider lens.

“A child with autism, or who is described as EBD or OHI, doesn’t need to have their dignity and worth limited by what is considered normal,” Drame says. “They need to be accepted and appreciated as human beings with an exceptional gift. Whether it’s a great singing voice or an aptitude for programming, every child has a gift within them that can enrich our community and society.”