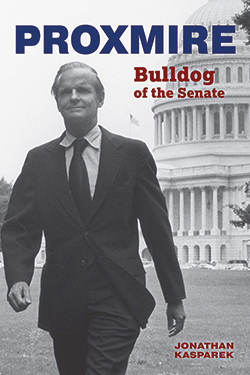 William Proxmire joined the U.S. Senate after an upset victory in the 1957 special election following Sen. Joseph McCarthy’s death. He went on to become one of Wisconsin’s most important political figures of the 20th century. Proxmire established a reputation as an independent-minded Washington politician who never forgot his Wisconsin roots. Jonathan Kasparek, a UWM at Waukesha professor of history in the College of General Studies, writes the first comprehensive biography of Proxmire, who championed consumer protection and farming interests while fighting what he considered to be wasteful government spending.