On a rainy, windy afternoon in November, several UWM students huddled under umbrellas near a double lot of gardeny green space in Milwaukee’s Sherman Park neighborhood. Local residents joined them in dedicating decorative benches and planters, designed and built by the students. It marked a milestone in a partnership between the neighborhood and the students, brought together through the Buildings-Landscapes-Cultures Field School.

Arijit Sen, an associate professor in the School of Architecture & Urban Planning and in UWM’s Urban Studies Program, leads the BLC field school. Its goal: learn about the people, culture, heritage and history in some of Milwaukee’s oldest and often overlooked areas.

Graduate students in architecture, history and other subjects immerse themselves in urban neighborhoods. They interview the people who live there and document architectural treasures, corner businesses and parks over a three-year period. “You can’t just waltz in with an idea and then leave,” Sen says. “You have to leave behind blood, sweat and tears.”

Field school students work together to build a planter for Milwaukee's Sherman Park neighborhood. This partnership fosters collaboration between the community and UWM students in architecture, history and other subjects. (UWM Photo/Pete Amland)

After field school students interview local residents about the neighborhood, they use the feedback they've received to design and build thank-you gifts for the community. (UWM Photo/Elora Hennessey)

Inclusive conversations, such as the many sessions UWM students held with Sherman Park neighborhood residents, are a vital component of the field school's mission and work. (UWM Photo/Troye Fox)

Undergraduate students – some funded by the Office of Undergraduate Research – also help during five-week summer sessions by interviewing people, taking photos and conducting archival research about neighborhood sites. The grad students take these conversations and findings into the Citizen Architects Studio, where they incorporate feedback into crafting a thank-you gift to the community, such as those benches and planters.

“Architects and architecture have this stereotype where you sit in your tower and design things for people down below,” says Jess Sherlock, who’s pursuing a master’s degree in architecture. “This studio breaks that stereotype, because you’re designing with the people who use what we leave behind. They might not use your design the way you intended, and that’s a good thing.” The field school’s inclusive approach welcomes a diverse cast of researchers. 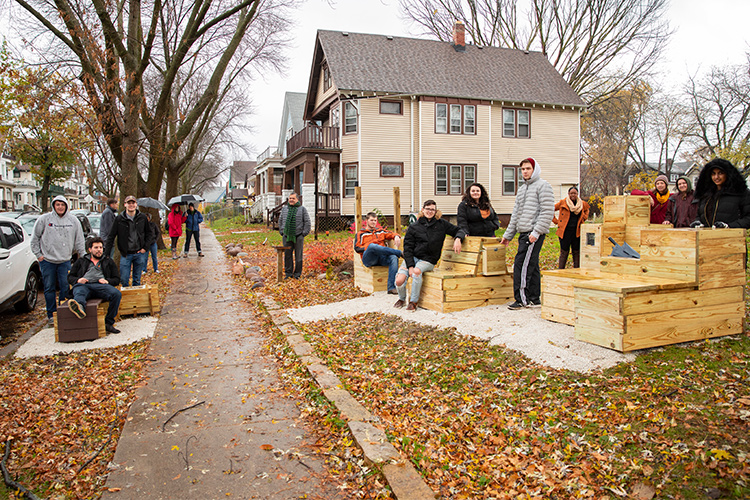 Sen coordinates with UWM’s Peck School of the Arts, UW-Madison and the Library of Congress. Historians, artists and architects participate as observers, researchers and interpreters. Results include the 2016 play titled “This is Washington Park. This is Milwaukee.”

“What matters most is that we produce good citizens,” Sen says. “To sustain urban life, we need to have different ways to tell stories about each other. Everything we have done in the field school has come from the knowledge we’ve gained working with neighbors.”