Every day, UWM’s world-class faculty members and students perform public-impact research that improves lives, businesses and entire communities. We are consistently regarded as one of America’s top research universities by academic, industry and governmental leaders, be it for work in health care and energy, entrepreneurship and freshwater science, or any number of other important fields. In 2018, UWM retained its Research 1 designation for highest research activity in the latest rankings from the Carnegie Classification of Institutions of Higher Education. It’s a designation achieved by only 3% of the 4,000-plus educational institutions considered. Also in 2018, UWM was one of only two universities to receive the national Campus-Wide Award for Undergraduate Research Accomplishments from the Council on Undergraduate Research. It recognized the depth and breadth of UWM’s undergraduate research opportunities. Taken together, these honors are reminders of the far-reaching positive impact of UWM’s people and their research. 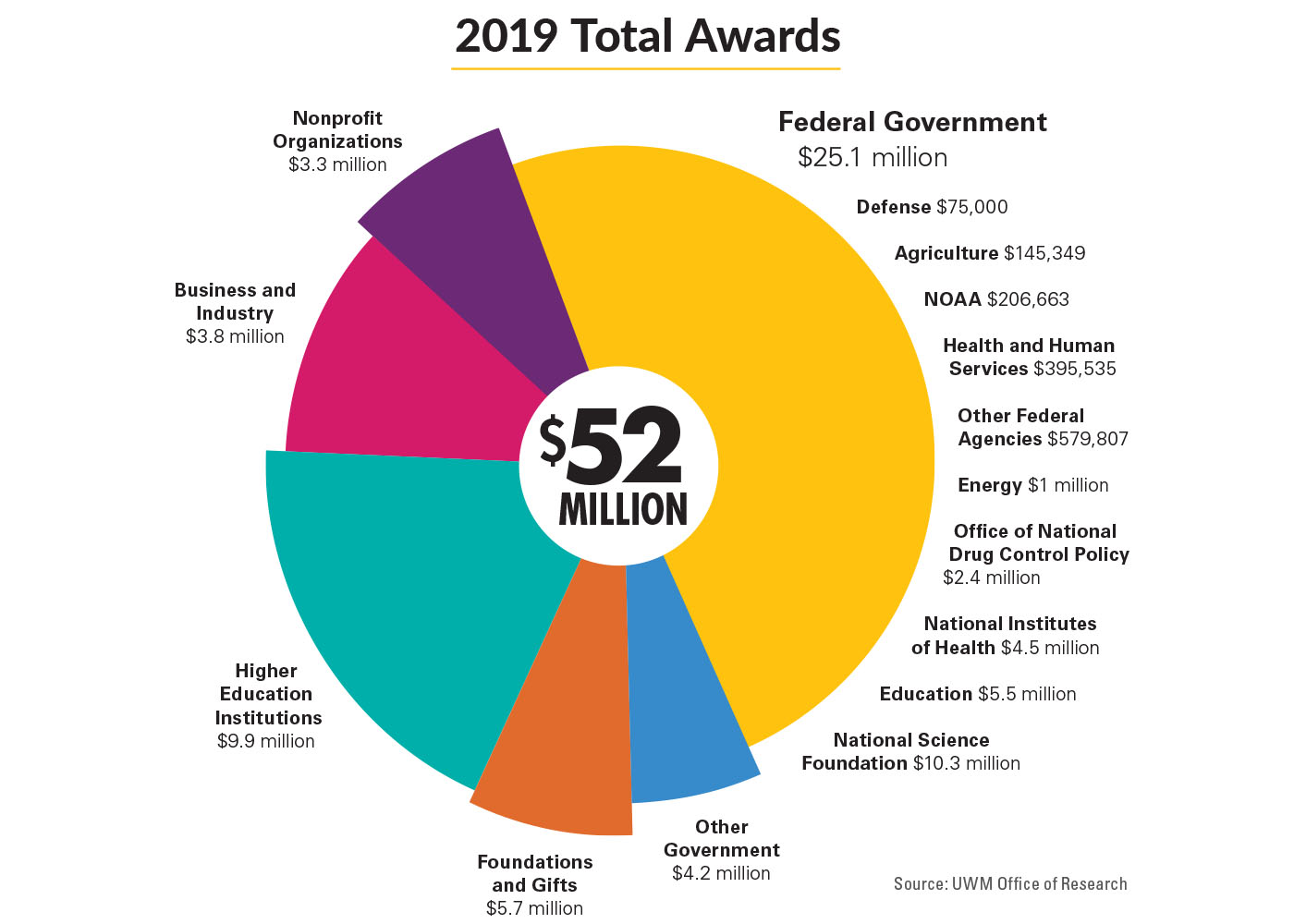 The 10 largest federal grants at UWM

The University of Wisconsin-Milwaukee is one of the nation’s top research universities as recognized by the Carnegie Classification of Institutions of Higher Education. In FY 2019, the university had $52 million in awards. Nearly half of that amount – $25.1 million – came from federal agencies. Here is a look at the 10 largest federal grants that were active last year.

Getting more seniors to exercise
Scott Strath, kinesiology
$3.1 million over four years, National Institutes of Health
In this study, people with movement limitations wear sensors as they go about their usual routines, allowing researchers to develop precise models to predict and encourage physical activity. This information doesn’t currently exist.

The path to PTSD
Christine Larson, psychology
$3.1 million over five years, National Institutes of Health
Larson is exploring neurobiological factors that predict risk for long-term post-traumatic stress disorder, with the goal of earlier intervention to improve mental health. The study focuses on people who have recently experienced trauma.

Expanding the potential for microgrids
Adel Nasiri & Robert Cuzner, electrical engineering
$1.3 million over four years, Eaton Corp. & the United States Air Force
Microgrids are power grids that service a limited area by integrating different kinds of energy, often including renewables, and exchanging information in real time. This collaborative project aims to develop a prototype of a distributed sensor network and data analytics platform for microgrids. The microgrid market is estimated to reach $30 billion in the next decade.

Improving support for adoptive families
Nancy Rolock, social sciences, & Young Cho, public health
$589,000 over five years, U.S. Department of Health and Human Services & Spaulding for Children
UWM researchers are evaluating programs that support families who adopt children or serve as child guardians. Through the U.S. Department of Health and Human Services, they work with administrators in Wisconsin and seven other states to design and assess promising practices. If these programs prove effective, they can be replicated in other child welfare jurisdictions.

Pinpointing exotic cosmic explosions
David Kaplan, physics
$493,000 over three years, National Science Foundation
Gravitational waves come from exotic explosions across the universe, but their precise locations are difficult to determine. To figure out how they explode and what they produce (such as gold), scientists use radio waves to pinpoint the explosions and fill in the missing pieces of the puzzle.

Diversity and innovation at work
Nadya Fouad, educational psychology, & Romila Singh & Ed Levitas, business
$492,500 over two years, National Science Foundation
The engineering workforce is almost entirely made up of white men. Would it make a difference if more women and racial/ethnic minorities participated? Fouad’s team is tracking the traits that lead to business success, building on evidence that shows diverse teams are more likely to innovate.