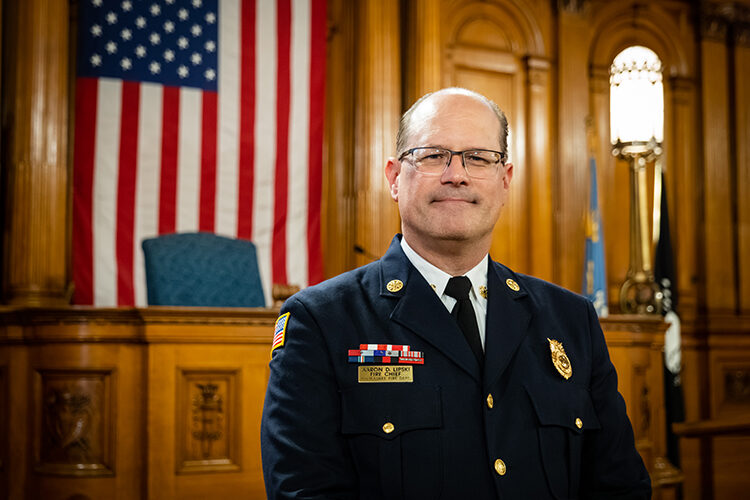 Aaron Lipski, recently sworn in as Milwaukee fire chief, is the fourth generation of firefighters in his family. (Photo courtesy of Aaron Lipski)

At the time, he was battalion chief in the Milwaukee Fire Department’s construction and maintenance division (the repair facility for all fleet and facility concerns). He was working on a master’s degree in public administration since he’d assumed responsibilities that called for more managerial and budgeting skills.

“In class, we were talking about how you measure the replacement cycle for a fleet – some standard ways and various recommendations. I left that class and probably stayed up half the night refiguring everything we had previously just done on a hunch. The next day I went before a pretty powerful body here in the city.”  The officials were amazed and impressed by what he presented, he recalls.

Lipski was named the Milwaukee Fire Department chief in May 2021 to serve the one year remaining on the term of former chief Mark Rohlfing. He had been acting chief since Rohlfing retired in October 2020.

He is the fourth generation in a family of firefighters and was well aware of the physical and mental stress of the job. “I was around it my whole life, but my family never pressured me. In fact, they encouraged me to go to college, do something easier on the body.

“My dad would come home absolutely exhausted after a 24-hour shift. He’d try to take me and my brother fishing and he’d fall asleep 10 feet off the dock.”

He did follow his family’s advice and earned his college degree – a bachelor’s in communication from UWM in 2001.

One day, his dad mentioned that a firefighting exam was coming up and casually asked if he’d be interested.

“I can’t fully explain it. It was like a light switch flipped, and I never turned back.”

As the new chief, Lipski sees that the Fire Department is facing some major challenges that will draw on all of his experience and skills.

“First and foremost, we’ve been struggling with pretty massive budget cuts for the past 10 or 15 years, and it doesn’t look like that’s going to be letting up anytime,” he said.  While recognizing the cuts are part of overall city efforts to control spending, “fewer stations and crews make it harder to do the job, especially in a large urban setting.”

At the same time that stations are being closed, the need for both firefighting and emergency medical services has increased, which has added mental and physical stress, Lipski said. Firefighters pride themselves on getting the job done, he said, adding “we need to be leaning forward on ensuring that we’re not causing compassion fatigue and just general fatigue.”

“The fire service nationwide – and Milwaukee is no different – has been largely a predominately white male group of employees. There is value in every one of those individuals, and they have saved a ton of lives, but I will tell you we don’t represent demographically the city we serve, and that’s a problem.”

The Fire Department has been actively recruiting in underrepresented communities and has had some success, Lipski said.

The department has also begun taking more of a role in public health efforts, providing gun locks as well as smoke detectors, and working with others on opioid prevention efforts and collection of unused prescription drugs. EMTs have also done training with UWM’s College of Nursing to learn to provide follow-up care and support to try to avoid future emergencies.

Lipski is particularly proud of the role the department has played during the pandemic. The department was instrumental in working together with subject matter experts and city and county agencies to form a crisis response team.

“Chief Lipski has stepped up in many notable ways during his current leadership of the department,” wrote Milwaukee Mayor Tom Barrett in a letter supporting Lipski’s appointment as chief. “He has successfully navigated through the worst months of the COVID-19 pandemic, providing strong support to our public health response; he has taken a solution-oriented approach to challenges such as the withdrawal of a private ambulance provider – a big disruption in our emergency medical system; and, he has successfully tapped into expertise within his department and elsewhere in city government.”

“The PA program is very proud of Aaron’s accomplishments, said Doug Ihrke, current program chair of UWM’s Public and Nonprofit Administration program. “It’s exciting to have a graduate of our program in such a position of influence in the city.”

While Ihrke didn’t have Lipski in class, he said faculty who did have him in class said that Lipski was an excellent student. “He is someone who garnered great respect from fellow students.”

As chief, Lipski is proud of the reputation the department has in the community.

“People tend to let us in their homes, or they’ll come out on their porch, and they’ll give us time in their day.”

That became especially apparent during periods of unrest and protest last summer, he said. Firetrucks or ambulances would turn a corner and find the street curb-to-curb with people. “In the midst of probably the most intense protests of my era at least, we were witness to those people who very angry, but they would part like the Red Sea and clap as we drove our ambulances or firetrucks through.

“Even with all our warts, and even with our failures, people still trust us and they still think highly of us. There is still a huge a huge amount of trust, a belief that when we’re responding we’re going there to do good.”