Chase Letteney has helped develop plenty of mobile and tablet apps during his internship with UWM’s App Brewery. But this one took the UWM computer science graduate student by surprise.

The app’s goal is to map and monitor critical brain functions during surgeries in which patients are awake. It aids neurosurgeons who are removing a tumor or tissue involved in epileptic seizures.

“The significance of what we were creating didn’t fully occur to me until after its first use,” Letteney says. “The surgeon was able to go much bigger with the tumor resection than he otherwise might have been able to do. To hear that was an inexpressible feeling.”

Called NeuroMapper, the app delivers a variety of cognitive and sensory stimuli to patients and evaluates their responses in real time. That helps surgeons avoid encroaching on tissue that would cause functional damage if removed.

The Brewery allows UWM students to develop apps for nonprofits, research groups and private-sector partners. On this project, UWM teamed up with Dr. David Sabsevitz, a neuropsychologist and associate professor at the Medical College of Wisconsin who conceived the idea for NeuroMapper.

In its first few months, NeuroMapper was tested in more than 30 surgical cases at the Medical College of Wisconsin. Other major academic medical centers around the country are testing it, too. 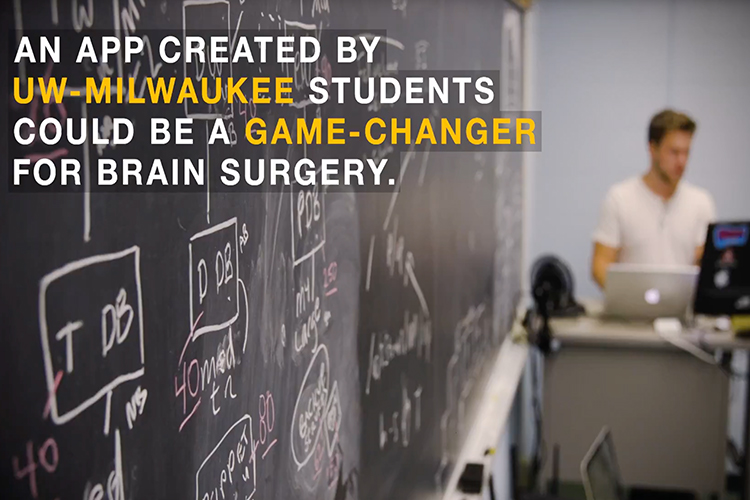 The app uses a sophisticated platform in which two tablets communicate while capturing and tracking sensitive behavioral metrics. It’s the latest of several apps born from a four-year partnership between MCW and the App Brewery, which gives students in computer science, information studies and graphic design experience in developing new medical solutions.

Sabsevitz says NeuroMapper lets surgeons perform more sophisticated testing in the operating room and monitor functions with audio and video. Until now, the process usually involved talking with and showing the patient pictures of objects to name.

“As far as I know, no one has done this kind of app before,” says Dustin Hahn, Brewery project manager. “And it was the most difficult job we’ve taken on to date. It took nine months to construct and evaluate it.” The average Brewery project is completed in a month.

Letteney figured out some of the app’s more complex functions – such as measuring patient vocal responses and the timing of those responses. “We’re using several different kinds of libraries, including audio and video, and intercommunicating over Bluetooth,” he says. “It was an incredible experience.”