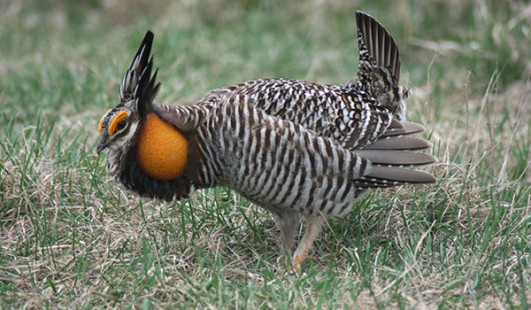 MILWAUKEE – Numbers of an iconic Wisconsin bird have plummeted in the last dozen years, prompting biologists to take action to keep the beloved greater prairie chicken from disappearing from the state forever.

Once found in every Wisconsin county, today their population is fewer than 600, making them a threatened species in Wisconsin.

Research at the University of Wisconsin-Milwaukee (UWM) had suggested that the decline was caused by a lack of genetic diversity in the population.

So a team of conservation experts from across the region joined with the Wisconsin Department of Natural Resources to initiate a bold strategy: They brought in female reinforcements from Minnesota with the goal of introducing some new genes into the local population.

The “new girls” were outfitted with radio transmitters and turned loose on the Buena Vista Wildlife Area in central Wisconsin. The experiment was part of the DNR’s Greater Prairie Chicken Management Plan that also is addressing habitat concerns.

Besides the DNR and UWM, who addressed the genetics, the translocation team included the Minnesota Department of Natural Resources, The Nature Conservancy-Minnesota Chapter, University of Minnesota-Crookston, University of Wisconsin-Madison, the Central Wisconsin Grassland Conservation Area Partnership and the Society of Tympanuchus Cupido Pinnatus.

The results of their breeding project were successful, but not the answer to the long-term problem of declining populations, said Peter Dunn, a biologist at UWM and member of the Wisconsin Greater Prairie Chicken Genetics panel.

“We found the genetic diversity to be at about the same level as it was before the experiment,” said Dunn. “While the project added some new genes to the Wisconsin population, its real value was in offsetting losses in genetic variation that happen naturally in small populations through a phenomenon called drift.”

Drift occurs when individuals with rare genes fail to reproduce and those genes become lost in the population simply by chance. In small populations, drift can lead to inbreeding and an increased incidence of harmful traits that negatively affect survival rates.

The effect of drift means that the translocation of Minnesota hens simply held the line on loss of diversity. In fact, without continuing translocation, it is unclear for how long the genes introduced by the project will persist.

Transport and tracking of the birds proved expensive and time-consuming, but the project did offer some good news: The scientists found no evidence of inbreeding, which reduces survival, and did not see a decrease in the number of eggs that hatched.

Going forward, the scientists will analyze the demographic and genetic data to determine how many birds are needed to maintain or change genetic diversity and identify habitat management efforts that help more chicks to survive into adulthood.

The Buena Vista Wildlife Area is one of four DNR-managed properties in central Wisconsin that make up the Central Wisconsin Grassland Conservation Area Project, which was established in 2004 to protect Wisconsin’s native grassland wildlife, including the greater prairie chicken.