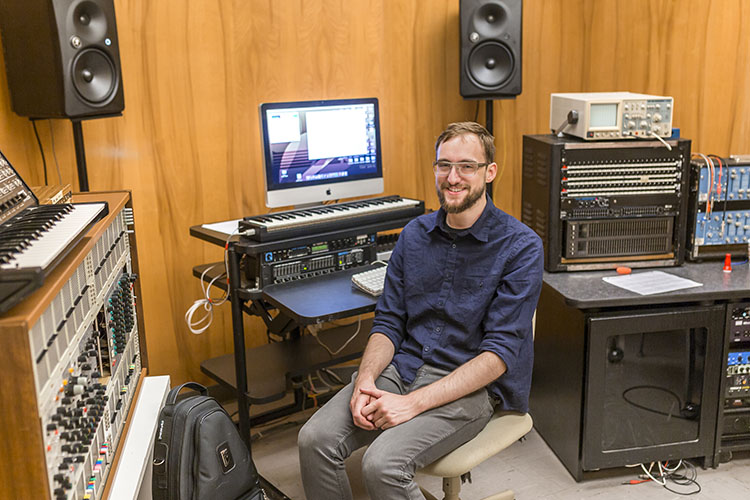 Enström, who graduated with a bachelor of fine arts degree in music composition and technology from UWM and a master’s degree at Wesleyan University in Connecticut, is currently in Sweden on a Fulbright fellowship in arts research.

Basically, he said, his work involves helping computers learn to be creative by drawing on a wide variety of sounds and techniques in his compositions. His “Sunlight Synth,” for example, incorporates a synthesizer that uses light brightness to generate sound. Listen to another example of Enström’s work from “Tin Birds,” an installation that he made while at UWM.

In his research, Enström’s idea would be to hook sensors to a computer and get the computer to listen the sensors to tell it how to generate music or sound.

“The example I’ve been using a lot,” he said, “is that one system might have a microphone listening for sound, and it might generate light patterns or LEDs or something like that. Then there will be a second system that has a webcam or photo cells. Then I use that together to create a feedback loop where both agents work together to make this larger thing that they couldn’t do otherwise.”

In Sweden, he is working in partnership with the Chalmers University of Technology and with Palle Dahlstedt, an associate professor at the University of Gothenburg who is a leader in the field of sound art using computer systems. He met Dahlstedt in the summer of 2015 at a conference on new interfaces for musical expression where Enström was presenting one of his research projects on electronic and “generative music.  (Generative music is generally defined as music created by a system, ranging from entirely random music mixes created by multiple simultaneous CD playback, to live, rule-based computer composition.)

“He was doing this really cool piano music where he had a computer system on top of a piano that watches or listens to what he plays, and plays it back through a disk like a player piano. I thought this was a really cool way of interacting with the computer that I hadn’t seen before.”

Enström, who is originally from Menomonee Falls, had thought about a different career path. “When I was younger I always thought I was going to be an engineer, but then I took an engineering class and found that I absolutely hated it.”

At the same time, though, he was taking a music theory class. “It was really fascinating to me that you could talk about music in this analytical way – a way that looked at all the pieces and how it all got put together and how that led to being able to make more music.”

He had started playing bassoon in sixth grade, and began writing music. “I didn’t really think of it as composing — just playing around and seeing what I could do with music.”

When it came time to head to college, UWM was a natural fit, Enström said. It was close and it has a strong music theory and composition program. “I started doing this computer music and sound art stuff at UWM.”

He found the university’s electronic music programs gave him the opportunity to apply current music technology like digital audio, analog synthesis, surround sound and other creative techniques to recording and editing his work.

“UWM’s program is pretty underappreciated,” Enström said. “It’s only just starting to get the attention it needs.”

Enström particularly liked the idea that he could work on compositions with longer time frames. “In more traditional music, you’re limited…like a string quartet is 30 minutes with a beginning, middle and an end,” he said. “I did this generative sound installation that was able to run for as long as it needed to because it was constantly generating music.”

In graduate school, he branched out to start doing research on how the brain and other neurosystems work together with sensory input to form consciousness in all sorts of creatures, exploring how these facets could be modeled in technology and software, not just for mathematics and science, but for the arts.

When he finishes his Fulbright in June, his goal is finding a job in the field or a possibly pursuing a doctorate in musicology.  “I want to move toward something that has a salary and also be able to do more research,” he said with a smile.

Through the Fulbright, he’s hoping to learn and share the newest forms of music through two cultures.

“I want to be part of two cultures, taking the music and artists that I know and love in the United States and giving them some publicity abroad. The thing I’m most excited about on the Fulbright is to be immersed in really engaging creative work that isn’t necessarily present here in the U.S I’m just excited to make these connections and see where they lead to.”